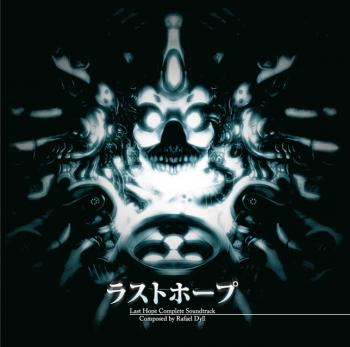 Last Hope is a retro-influenced space shooter released by European developer NG:DEV.TEAM for the Neo Geo, Neo Geo CD, and Dreamcast. Composed by Rafael Dyll, this was the score that paved the way for his entry into game music composition as a full time career. Released in October 2010, the Last Hope Complete Soundtrack features remastered music from the original 2007 release of the Last Hope Original Soundtrack. The re-release also includes quite a few remixes of the game's original music, with both Dyll and guest contributors lending their talents to re-interpret the original music.

Before touching upon the new arrangements, let's get a nice foundation planted for the originals. The original soundtrack itself is, by most standards, rather small. The original soundtrack opens with "Title," an atmospheric theme featuring some ominous synth, industrial percussion, and a variety of vocal samples. The overall soundscape is definitely a futuristic one, with some wonderful trance hits in the melody line and some beautiful strings harmony. It really reminds me of Dyll's work for the Söödner-X series, in terms of progression. "Game Over," on the other hand, gives off an extreme feeling of desperation. While I associate most game over themes with sadness, Dyll's theme really gives me a feeling of impending doom, yet at the same time, a sense of pushing forward to try to vanquish evil once again. The combination of piano, strings, and synthesizer works well to this effect.

One of the more substantial themes, "Dark Fear," also carries over the ominous tone first observed in "Title". Eerie synthesizer and futuristic electronic accompaniment with a sinister beat is featured early on in the mix; however, as the theme progresses in its eight minute length, it definitely becomes a bit more futuristic and heroic in soundscape, while retaining a hint of tension, particularly in the accompaniment. Most impressive, in my opinion, is how, despite its length, Dyll manages to keep the listener actively conscious of the music through its variety. At times, you'll hear some upbeat electronic and jazzy piano sections that really contrast nicely with the established sound of the theme. It's a stunning theme and easily one of the best things I've heard Dyll compose.

"Dark Seed," another lengthy theme, is an impressive listen. Opening with some wind sound effects and some crystalline piano leads, it quickly establishes itself as a trance theme with an exquisite melody. The futuristic, slightly industrial, accompaniment goes extremely well with the inviting piano. At times, I feel that the accompaniment can become a bit avant-garde at times, which, mind you, isn't a bad thing. It serves as a wonderful contrast to the more traditional accompaniments heard on the soundtrack. While it's not as varied as "Dark Fear," it does manage to keep the listener's attention through its stunning development. The remastered sound quality is also a benefit here.

"Bossfight" is an energetic ride that, compared to other boss themes for shmups, sounds more like a stage theme. However, it's an extremely accomplished and well developed theme nevertheless. Vigorous, heroic tones are created throughout, particularly through the use of the piano, with its ethereal and crystalline nature, and the extremely well-crafted layering of electronica to serve as a fitting accompaniment. The synthesizer and piano, however, play a dual role in this composition for they are also used to simulate tension. Of course, there are some shorter themes as well that focus more on atmosphere than melody. "Creepy Waters, Melting Spirits" definitely brings the atmosphere, through its use of haunting choral accents, sinister electronic harmonies, and foreboding, deep piano notes alongside some more cheerful, lighter notes. However, those who don't appreciate more atmospheric approaches may wane a bit of interest in this one. "Burning Sun," on the other hand, is a powerful industrial theme that also utilizes haunting choral samples and sinister synthesizer work; however, it lacks a strong focused melody, which may put some listeners off.

"The End" is one of the more unique themes on the soundtrack. As with the other themes, it focuses more on atmosphere, which may turn some listeners away. At the same time, I find it to be very creative, particularly in the accompaniment. The deep piano notes and synthesizer work well together to accentuate a tense situation, although it's not as tense as some other themes. The ending theme, "Freedom," opens with the sound of heavy rain and some thunder, before moving into an extremely beautiful piano melody that has a very new age sound to it. It's an intriguing piece that flows quite well. The cascading piano in the introduction combined with the intriguing rhythm in the industrial percussion set the stage for the more lush components of the theme, which include some orchestral and choral harmonies layered with a very modern sounding piano lead. As the theme progresses, a more electronic atmosphere is thrown in, with heavy industrial beats, summarizing the overall soundscape of the game. In the end, it's a stunning way to end the soundtrack.

The complete soundtrack also features arrangements, some by Rafael Dyll himself, others by special guests. Rafael Dyll offers two remixes, "Trancedental" and "Oldschool vs. Dance." The former, a remix of "Title," immediately conjures up images of Söldner-X, like the original does, but through its updated soundscapes and trance atmosphere. I really like the addition of some slick techno beats as well, as it helps bring a more modern sound to the original. It's a very exquisite theme that manages to convey a nice sense of serenity, but at the same time, a healthy driving nature as well. His second remix, "Oldschool vs. Dance," is a remix of "Dark Seed." While I'm not the biggest fan of the spoken dialogue that opens the remix, it does help portray the plot of the game. Fortunately, the subsequent remix is another marvel to listen to. It's a truly beautiful theme that really takes the crystalline piano leads from the original to new heights, through the combination of some sweet dance beats and the more retro-inspired soundscapes. This is definitely something I envision would get extensive play time in a German club, if it had such an opportunity.

The Relation Sound Composing Team offers their takes on "Bossfight" and "Creepy Waters, Melting Spirits." The former, entitled "Take This!," is an upbeat electronic remix that really places emphasis on the more heroic soundscape. The overall atmosphere is quite bright and I really think that the increased tempo in the bass line really helps accentuate the tone of the piano. The synthesizer passages really give off a feeling of freedom and flying through the vast reaches of space. While the ominous tones are, for the most part, lost in this remix, it manages to entertain. Their second remix, "Underground Experience," is, in my opinion, an improvement over the original. The atmosphere is heightened through its incorporation of heavy techno beats, the wispy piano notes, the ethereal choral tones, and the additional synthesizer effects in the accompaniment. In the end, it's a pleasing interpretation of the original, even if it feels more like an upgraded version at times.

Christian Werdehausen also lends his talents to this album with remixes of "Burning Sun" and "The End." The former, "Sun Burn," is another fantastic interpretation of the original, for the better. While the core elements are still featured, such as the ominous synthesizer and industrial setting, I find the addition of the foreboding piano to be a particularly effective touch in adding some more texture to the original, while the heavy techno beats really help add some more tension to the mix. While "The End" was a very quirky theme, in my opinion, "Alien Symphony" is a more robust, but ultimately more traditional rendition of the original. Heavy techno beats, ethereal synthesizer notes, and industrial tones dominate the remix, in essence, cutting down on the quirkiness of the original. However, at the same time, there are some moments in the remix that, while not entirely quirky, do seem "out of place," helping to match the feeling of the original, in particularly the distorted electric guitar notes from time to time. It's a nice remix; however, I feel that some of the core of the original was lost.

Lastly, Daniel Pharos handles the game over remix. Entitled "Knights of Game Over," it really accentuates the feelings described above about the original. Ominous and haunting female chorals and uplifting piano are combined with a slick dance beat and some eerie synthesizer accompaniment; however, at the same time, I find this to be one of the weaker remixes on the album. It definitely does justice to the original and is fun to listen to, but at the same time, I don't find it to be nearly as creative as some of the other remixes, such as those by Dyll and Werdehausen.

For fans of Rafael Dyll's work on the Söldner-X series, I highly suggest picking this album up. While not as refined as his later works, it does showcase Dyll's innate talent as an electronic artist. Though the more atmospheric tracks definitely fit within the confines of the game, on a stand-alone listen, they may get lost among the more substantial and melodic themes. As for the remixes, I think each remixer demonstrated their talents as well, with some shining above others. Overall, this is the definitive album to get regarding the music to Last Hope as the original publication was limited in run and this one features re-mastered music and additional remixes for your listening pleasure.

This is a re-release of the 2007 album with bonus arrangements.