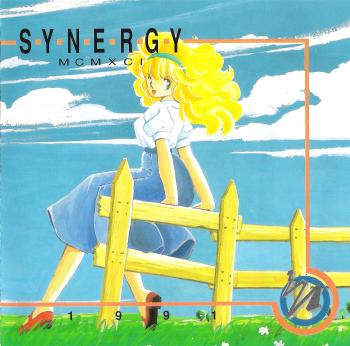 MCMXCI celebrated the summer of 1991 with another collection of game-inspired tunes made with humble synth modules. The release features 20 tracks each by a different contributor, some famous, some lesser-known, and some under unrecognisable pseudonyms. There is therefore considerable diversity within, although also some variation in quality. Given its more of a compilation of indie tunes rather than a concept album with high production values, a lot of pieces made it that probably aren't worth much time at all. Nonetheless, do the highlights redeem it?

Shinji Hosoe's opener will delight old-school fans with a musical tribute to shooters such as Gradius III and Dragon Saber. The cheery melodies and rapid guitar-based accompaniment are just right, though unlike most game tunes, Hosoe gets the chance to elaborate and improvise on his material too. As the name suggests, Tetsukazu Nakanishi's "Blue Wind" maintains the feel of gliding through the skies, but its game inspirations are a little less obvious. Although Kenichi Arakawa's "Go South" takes some time to get going, it eventually becomes a stimulating blend of rock and jazz elements. That said, Masanori Nakata's "Outer Zone" is probably the star action theme on the album and is refreshingly unconventional despite its rock leanings.

There are a few particularly amateurish additions to the album too. For example, "Season Off" features Kiyoko Yamada's rambling blend of pseudo-sentimental music box and piano passages. MIU's "TDG #1" tries hard to get a strong groove going with its bass riff, but the result sounds even cheesier than intended. I wasn't impressed with "Whirlwind" either since it had very thin textures, though some might appreciate the simplicity and fair development. Other tracks aren't so obviously flawed, but most are very typical imitations of retro game music. The vocal addition to the album, "Sea Sea Sea", is once again a select taste with somewhat feeble female vocals some country-inspired instrumentals. Still, it's not as obnoxious as some vocal themes on these indie albums.

This album features a collaboration between then-emerging artists Hayato Matsuo and Hitoshi Sakimoto, "Nuts". It's a fantasy synth piece unlike what most would expect from the pair. Nonetheless, Matsuo's desire for rich timbres and Sakimoto's tendency to exuberantly decorate his music still comes across. Yuzo Koshiro's contribution "Tiny Groove" is refreshing too with its progressive blend of hip-hop beats and tropical elements. The composer, even when exploring these and using low fidelity samples, is still able to create compelling rhythms. Hiroshi Miyauchi's "The Sun" is well done too. The first section is merely an imitation of tropical music, but the development gets things going with blaring big band use and extravagant piano solos.

Much of MCMXCI seemed like a demonstration of various shades of amateurism. Most tunes are very derivative of conventional old-school game music, either in deliberate tributes or, more commonly, because a composer is unable to assert his own individuality. There are also compositions that feel fundamentally flawed due to uninspired melodic ideas or amateurish arranging. A few of the big names like Matsumoto, Miyauchi, and Koshiro, are able to do better, but the rest mostly seem like they're just coming along for the ride. Only a few create anything particularly bad, but little is spectacular either. Those looking for a more impressive testament to what game artists can do should look into Great Wall released around the same time.