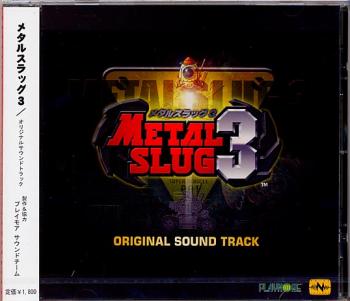 Metal Slug 3 was one of the most enjoyable games in the series. Combining hardcore gun play, over-the-top action, charming art, and a lot of Japanese soul and flavor, the game manages to kick all the possible amounts of ass that dare to cross its path. Despite being great on their own, the previous entries in the series were just a build-up to the climax that was Metal Slug 3, which was polished close to perfection. Of course, all the charm and fun was enhanced by the fantastic soundtrack, which in true Metal Slug fashion, features some of the best compositions from the previous games, while adding some awesome original ones. The soundtrack was published in two versions. The first is a single published disc and features superior sound quality due to a good mastering job. The second version is included in the Metal Slug Complete Sound Box, but the mastering is inferior.

There are two notable aspects that elevate the Metal Slug 3 soundtrack above its predecessors. First of all, the audio quality is superior to Metal Slug, Metal Slug 2, and Metal Slug X altogether. The arcade synth is improved and sounds better than ever. This feature makes the newer compositions stand out even more, and establishes the best versions of the older ones. Secondly, the Metal Slug 3 soundtrack is the most context-effective entry of the franchise. The lavish variety and creativity in the game is made even more memorable and effective from the music. Whether it is on a island, the desert, underwater, underground, above the ground, and even into space, there is always a fitting theme to accompany each scenario. To put it briefly, Metal Slug 3 has one of least boring soundtracks in existence.

Surprisingly enough, the main theme of Metal Slug returns in this game, but it undergoes through a charming arrangement called "Blue Water Fangs". This is truly a memorable, if over-the-top, heroic anthem, made even more unique from the fun and quirky tribal percussion, which is fitting for the exotic first stage of the game. Other sea-themed compositions include the catchy "Marine Diver", the rocking "Hard Water", and the more orchestral "The Shallow Sea". All of them offer a nice accompaniment to the underwater areas of the game, while still being a fun stand-alone listening.

"Midnight Wandering" could have been very well featured in a Romero zombie flick, with its grungy and hard-edged guitar riffs, eerie "ghost" chanting, and really sweet guitar solo in the middle. The track falls into heavy metal category, and it maintains a sense of silliness and horror at the same time, which is very fitting for the zombie-infested segment of the game. "The Magic Lantern" is yet another catchy rocking tune, with a small reprise of the main theme. The track inspires danger and adventure, while at the same time it manages to inspire humor in context. When you battle through a cave against crazy yetis that spit out frozen projectiles that follow you, get your way blocked by giant ice cubes, later finding a frozen elephant that you can ride and ultimately blasting your way out while annihilating zombies with machine-guns and thunder clouds (Yeah, you read that right), it's hard not to smile while this music plays in the background. This is something that Metal Slug games are able to pull off extremely well.

Just like the game, the soundtrack can be "serious", or can be just mindless over-the-top fun to listen to. There is no better example than "Desert" of this. This is a hard rock track that starts in the most clichéd way possible — that is, with a typical Middle-Eastern motif — then bombards the listener with crazy guitar riffs that sound like blazing machine-guns. The Middle-Eastern motifs are spread throughout the track, whether with ethnic instruments or electric guitars. Ultimately, these elements make for a hard-edged but funny track, that simultaneously makes me laugh when the mission starts while pumping me for action.

Another notable adrenaline-fueling track is "Into Space". This starts with the now-iconic rocket ignition-sounding guitar solo that has become a staple for the series. The track is a distinct combination of heavy guitars riffs, cheesy alien chanting and cool keyboard solos. It's one of the most enjoyable tracks of the album, without a doubt. "Into the Sky" and "The Japanese Army" are two fantastic and quirky orchestral themes. The former is a bombastic flight anthem, and the latter is a more militaristic but still funny composition. The final stages of the game are extremely challenging and the music fits the hardcore moments like a glove too. "Bioinformatics" is a heart-pumping and unforgiving theme, that reeks danger and urgency through every note and chord, while "Escape" is an even more intense ramp that follows the dramatic escape from the alien spaceship.

As for the re-used compositions, they can't sound any better than this. Whether it is the atmospheric and eerie "Metamorphosis", to the the unforgiving "Assault Theme" and "Steel Beast 6Beets", from the terrific and adrenaline-inducing "Kiss in the Dark", to the epic "First Contact" and "Final Attack", you just can't go wrong with the music from the franchise.

The Metal Slug 3 soundtrack is one hell of a ride from start to finish. There is not a single dull moment in the soundtrack, and the amount of variety, style and personality makes this one of the best and most memorable arcade scores ever. Also, a lot of great tracks from the previous entries are included in the package, along with an audio boost, making this album the ultimate classic Metal Slug soundtrack. This is the album to pick up for newcomers, as it captures the spirit and style of the series flawlessly. The original version of the soundtrack is the one to go for if you're in this category.

Credits from the staff roll: HIYA!, Bero-ou, Hori_Hori, Q_JIROU, Maitaro
Album was composed by Bero-ou / Hiya! / Hori_Hori / maitaro / Q_JIROU and was released on January 31, 2003. Soundtrack consists of 28 tracks tracks with duration over about 50 minutes. Album was released by Noise Factory.