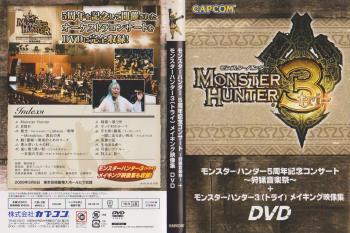 Following the success of the Gyakuten Saiban Orchestra Concert, sound director Tetsuya Shibata decided it was time that the hugely popular Monster Hunter series was commemorated with a fifth anniversary orchestral concert. The concert occurred at May 6, 2009 at the Tokyo Metropolitan Art Space in Ikebukuro and featured 13 suites from across the series orchestrated by members of Imagine. The arrangements were flawlessly performed by the Tokyo Philharmonic Orchestra, vocalist Ikuko Noguchi, and four ethnic instrumentalists on the night. For those who couldn't make it to the concert, Capcom released both a CD and DVD recording for the concert. While the video recording is the most reflective of the live experience, it is actually exclusive to the Monster Hunter 3 limited edition game release. Let's take a closer look at what both the original concert performance and its DVD release had to offer.

As expected, the concert opens with a performance of the series' main theme composed by Masato Kouda. Shiro Hamaguchi had been previously orchestrated the theme for Monster Hunter, so this rendition is similar to the one featured in the Monster Hunter Soundtrack Book. It is somewhat disappointing that the structure of the composition is almost identical to the Superman main theme, but at least the melody is original and portrays the characteristics of the series so well. This melody is exposed with a warm brass fanfare and listeners will subsequently reminisce about the game as swelling strings, light percusssion, and exotic woodwinds are introduced. The live performance faithfully recreates the emotions of the original and proves a visual spectacle too, particularly the triumphant cymbal crash at the 0:33 mark. Taking an ominous turn with a dissonant canonic take on the original fanfare, the theme gradually intensifies into an action theme with brass shrills, demanding progressions, and ethnic percussion. To finish, the theme is presented into the form of the march with contrasting grandiose and contented sections decorated with trilling flutes, fluttering strings, and harp arpeggios. In the DVD release, the orchestra are shown unifying for this coda under the commanding baton of Hirofumi Kurita before receiving modest applause. The overture might be derivative, but it is still a fitting and emotional entrance to the concert.

There are plenty of action-packed arrangements in the Monster Hunter concert. A little later in the concert, Kazuhiko Sawaguchi offers a medley of three of Monster Hunter's darkest themes. "A Glint in the Eye" inspires the imagery of a lurking predator with brass discords appearing against unresolved harp and vibraphone motifs. The arrangement grows far more exciting from the 1:08 mark when Lioleus' theme "Howling" comes to the forefront. Sawaguchi offers a dynamic and intense orchestration, synchronising several brass crisis motifs against fast-paced strings and percussion. The effect is enhanced by the on-screen video, featuring transitions in the lighting between aggressive blues and reds. After a pause, the medley leaps into Monoblos' "Crimson Horns" at the 2:23 mark. The ritualistic sound of the original is preserved with yet more bombastic brass against ferocious drum rhythms. After that arrangement is left on an unresolved note, Hayato Matsuo treats us to an epic inerpretation of "The Moving Mountain of Sanctity". Following an incredible organ introduction, the first half of the arrangement focuses on the interplay of imperial brass fanfares with dense organ counterpoint. While much of the arrangement is extremely dark, there is a gradual metamorphosis towards the "March for the Heroes" theme, ensuring warm and triumphant moments. The effect is even more inspiring in video with the far-reaching perspectives of the hall featuring the illuminated pipe organ at the centre. Simply superb.

"Awakening" demonstrates the very peaceful tone of the town theme arrangements featured in the concert. On the DVD release, the orchestra is bathed in twilight, leaving the spotlight to be placed on the four ethnic instrumentalists. Koji Ezaki interprets the melody on bamboo recorder and brings so much bittersweet emotion to it. Yasunori Iwasaki uses the orchestra in a very restrained way, but the first oboe offers some serene elaborations on the original material, while the strings provide soaring countermelodies. This ensemble is revisited in the fifth track with interpretation of Monster Hunter 2's "Village of Deeply Blessed People". There isn't really much to individualise this arrangement, but the recorder and oboe performances are enough to bring out all the humanity in the arrangement. There are also some lovely subtleties in Akifumi Tada's arrangement, such as the rich countermelodies on cello and violin, as well as the radiant wind flutters. All in all, it is a pleasant interlude in the concert. Monster Hunter Freedom 2's "Theme of Pokke Village" is presented in a similar manner once again, reaffirming the format of the series' town themes is quite similar. Koji Ezaki's wind solo is presented against soft strings, radiant flutes, and gentle bouzouki, oud, and bodhrán parts. This time, he plays an alto shawm rather than bamboo recorder, which gives a slightly different essence to the theme. However, something more daring could have been offered here to even more interesting effect.

Hayato Matsuo offers another masterful arrangement six tracks in with interpretations of two Monster Hunter 2 action themes. In this instance, he demonstrates his more lyrical use of the orchestra and is influenced more by classical traditions than cinematic ones. It's amazing to hear the amount of momentum the orchestrator builds up in Kushaldaora's theme; the brass crisply punctuate and the strings wistfully glide against the racing snares. "Queen of the Blazing Kingdom" serves as a pleasant contrast and maintains the Arabian influence of the original despite being interpreted for symphony orchestra. Yasunori Iwasaki's medley of battle themes from Freedom and Freedom Unite isn't quite as striking. However, it features some of the most interesting orchestrations on the concert due to the incorporation of avant-garde techniques. This ensures both brutal moments like the overblown brass fanfares at 1:17 and more heartrending ones such as the passionate string work from the 1:55. The percussion use is also effective, mixing traditional and modern elements, while the lighting adds to the atmosphere with deep and turbulent shades of red. Although the battle arrangements are similar in instrumentation, they are quite distinguished in mood and style otherwise, ensuring the concert remains interesting. The multi-arranger approach was especially effective in this regard.

The concert is rounded off by a succession of arrangements by Shiro Hamaguchi. "Proof of a Hero" is a fleshed-out version of the main theme with more bombastic orchestration and extended development sections. While it makes the opening arrangement superfluous and continues to harbour obnoxious Superman influences, the actual recurrence of the theme is welcome and effective in the grander scheme of the concert. "To Those Alive" provides a rare glimpse into Yuko Komiyama's approach for Monster Hunter 3. While as epic as Masato Kouda's main theme for the series, it takes a much more personal tone; at first, it is elegaic, but it gradually builds up into a more motivating march. The DVD meanwhile intersynchs the dark images of the string section and cor anglais presenting the melody with video projections showing action from the game. Intended as the last item on the concert, it is greeted with a standing ovation for the orchestra and its charismatic conductor. But that's not all! As a bonus, the Tokyo Philharmonic Orchestra offer a light-hearted jazz arrangement of series' favourite "Cute Ailu". I find the 1950s Japanese orchestral style presented here to be quite depressing, just as I do with some of Koichi Sugiyama's town themes. Still, there are bound to be many that enjoy it and it's a 'cute' bonus regardless.

Of course, Monster Hunter 2's vocal themes make appearances during the concert. At the halfway point, Ikuko Noguchi appears on stage to sing "Song Sung to the Spirits". The spiritual video presents presents her in a traditional white dress against the background of a harp being plucked. Her soft interpretation of the melody brings out its exquisite shape and exotic influences, while the supporting orchestration is subdued yet effective. It is one more transitory item on the concert, but it is still beautiful while it lasts and sets up a melody to be reprised at the end of the soundtrack. For the final item, the orchestra presents the richest version of Monster Hunter 2's delightful main theme in "Hunter, Go Forth". It opens with a colourful orchestration of the theme that journeys a little father than the soundtrack version. Indeed, Shiro Hamaguchi's wide-ranging arrangement reflects on much of the drama and emotion that has passed. From 2:35, Ikuko Noguchi returns to offer another deep and spiritual vocal performance. While her arrangement is similar in tone to "Song Sung to the Spirits", it is all the more emotional with the thicker orchestration. After the final applause, the credits roll and recount the main theme of Monster Hunter 3 in a serene fashion. It's a tasteful accompaniment to the accompaniment and a welcome preview to Monster Hunter 3.

All in all, the Monster Hunter Orchestra Concert was a accomplished production that is faithfully recollected on the DVD release. It features accessible wide-ranging track choices, mature orchestral arrangements, well-polished performances, and excellent recording quality. Some of the arrangements verge on being homogenous, such as the ethnic instrument town theme performances and the brassy battle marches, but there is still enough variety and intricacy to keep listeners entertained for the duration. The only downside is that this DVD came as a bonus with the limited edition version of Monster Hunter 3 and would have been better sold separately. While the commercially available CD release is enjoyable, it doesn't quite recapture the experience of the live event as much. Regardless, this concert is certainly the definitive tribute to Monster Hunter's music and should be seriously considered by any fan of orchestral music.