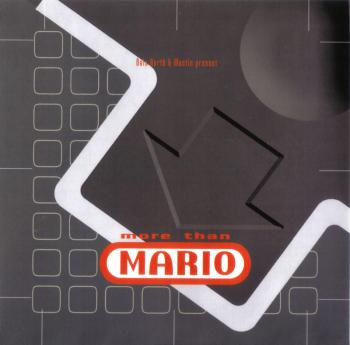 More Than Mario is a tribute to the much-loved music of Nintendo — from Mario and beyond — by long-time American remixers Mustin and Dale North of OneUp Studios. While technically a fan-arranged album, More Than Mario was promoted as having the quality of an official album and carries a considerable pricetag in both its physical and digital editions as a result. Any album demanding one's time and money is fully deserving of a critical review if it does not satisfy, and unfortunately this is the case here.

The best feature of the album is its variety. There are some 16 arrangements featured here, covering material ranging from the obligatory chiptune rendition of Super Mario Bros.' main theme, to interpretations of fan favourites from Zelda, Metroid, and Pokémon, to tributes to more recent games such as Animal Crossing, Nintendogs, and Luigi's Mansion. I was especially pleased that The Legend of Zelda: Link's Awakening received a nod. Contrary to certain promotions, though, even the less well-known material is pretty mainstream here — and some classics such as Pilotwings, Shin Onigashima, or Balloon Fight don't even receive a reference. However, the track listings are still more encompassing than most Western fan-made activities and a decent reflection of popular culture.

Sadly, even the most famous tracks interpreted on More Than Mario tend to lack appeal here. There was plenty of potential in Dale North's synthetic take on Donkey Kong Country's "Aquatic Ambience", but the final results are unimpressive. The arranger attempted to recapture the atmosphere of the original in a modern setting using expressive synthpads and beats. While a decent idea, the stylings resemble the material in commercial chill-out albums more than more the thoughtful material of artist-produced ambient albums. In addition, the sampling is certainly weak for 2006. The strings here have a particularly artificial feel, and the beats lack the subtlety needed to have an immersive effect comparable with the original. There are certainly plenty of better renditions of this theme, ranging from Retro Remix Revue to Symphonic Legends, and even the studio itself one-upped themselves with its band interpretation.

Out of all arrangements on the album, I was most excited about "Koopa Sour". Like the arranger Mustin, I have always loved Koji Kondo's surprisingly epic and expansive castle theme from Super Mario World, and felt it deserved a fully-fleshed gothic-orchestral take some day. Unfortunately, this remix is not it. The opening section aspires for a filmic orchestral sound, but suffers from very thin orchestration and dated samples. The arrangement subsequently transitions into a somewhat faster fusion of electronic and acoustic samples. Once again impaired both compositionally and technologically, the mixing between Greg Kennedy's violin, Mustin's piano work, and the electronic beats strips the music of its appeal. The best section is the ethereal interlude from 1:44, but even this is a corny Elfman imitation. "Birdo Cosmo" is a superior take of a darker theme from the Mario series, yet once again suffers from generic stylings and amateurish implementation. It's one of the most listenable entries on the album, but far from excellent.

Among other disappointments, "Black Russian on the Rocks" emphasises the stereotypical qualities of Tetris' Russian folk dance with its plodding piano chords and sporadic interjections. However, the result verges more on offensive than charming, and is certainly irritating over an extended playtime. The piano solo based on Nintendogs is suitably modest in its approach, but also lazy in its harmonisation and development, while the interpretation of The Legend of Zelda's dungeon theme rehashed from Club Game Music randomly mixes wacky EDM sections with predictable acoustic passages to uninspiring effect. Finally, Super Mario 64's "Dire, Dire Docks" is degraded into a smooth jazz piece complete with thoughtless piano improvisations and shallow synthpads. The additional wind and seagull sound effects don't add to the atmosphere and just prove a tacky distraction instead.

Clearly, More Than Mario falls down in three crucial ways. Despite its ambitious concept, the majority of the selections and approaches on this album have been done many times before. In addition to being derivative, essentially all the arrangements on this album lack depth and elaboration. Furthermore, the implementation is crippling throughout, with most samples sounding dated and most performances being poorly integrated. Some arrangements on the album may be enjoyable for those wanting to revisit fan favourites, but don't expect too much from the experience as a whole. It's better to stick to the many other official and unofficial interpretations of the music featured here instead.