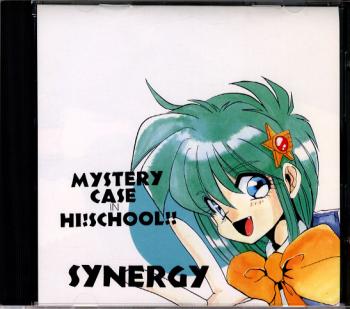 Now this is more like it! Leaving jokes about the Engrish title for the moment, Mystery Case in Hi! School is actually an ambitious album from the Synergy Record line. Whereas its predecessors were little more than compilations of old-school game-influenced music, this release is a concept album with similar production values to Troubadour albums. The concept isn't that obvious in the music, but it at least guided the various composers to venture outside their comfortable range and produce some actual substantial music. Let's see how they did...

The album begins in a promising manner with Hitoshi Sakimoto's piano composition "The Sky". It's an uplifting work that demonstrates some of the origins of Sakimoto's most well-known progressions today. It's not entirely a piano solo like some of his Troubadour works, but his individualistic use of the instrument is effectively showcased. The piano also leads in Daisuke Takahashi's "Mitsu", first with a jazzy waltz and then into a series of fascinating dissonant progressions. These two piano tracks are already more professional than pretty much anything on the preceding Synergy Record albums. Takahiro Yonemura makes good use of the piano too in "If We Meet in a Dream", but mainly as a backdrop for the various jazz and pop elements gradually introduced above. The final track "The Last Heroine" returns to the piano focus of the album while uplifting spirits with a spectrum of other synthy forces.

Moving on to the rest of the album, there are quite a few jazz, funk, and rock tracks. KAJA's "Agony" is a good example of a fusion of all three styles and creates so much emotion with its intense 80s-influenced chord progressions. S.S.T. "Flight!" and "Outbreak" are both appealing works driven by hard bass guitar lines, but featuring much more fluid and airy upper parts. It's pretty clear Nakanishi was ideal for his role on the Ace Combat series given the latter piece. Band's Takenobu Mitsuyoshi contributes a jazz-influenced track that is both soothing and catchy, "Red Night of Kawasaki City", while Shinji Hosoe offers the uplifting and punchy jazz fusion effort "Arthur's Good Manners". Although a tad repetitive, "Inside Power" is an enjoyable techno track since it has a fair amount of emotion and quirk within, while Takeshi Abo's "Coosmic Wave" is effective chillout music limited slightly by poor samples.

Unfortunately, there are a few weaker efforts on this album. The vocal contribution "I'm a Specimen" is just awful. This combination of high-pitch out-of-tune female vocals and extremely thin accompaniment can't possibly endear. The integration of voice samples on ONION's "Vector" disrupts an otherwise decent chillout, mainly because they just sound so random and out-of-balance. Although fortunately free of any lead vocals, Kenichi Arakawa's "Fresh Breeze" also disappointed me somewhat; although the composition has quite a lot of elements, the focal melody and overall set-up seems a little tacky. Talking of disappointments, MIU sets expectations high with an epic pipe organ introduction before transitioning into an unrelated but still catchy funk body. There are still occasional horror elements, but it feels more like the composer simply changed his mind half a minute in.

Mystery Case in Hi! School is an enjoyable collection of music. While not as ambitious or consistent as the releases by Troubadour Records, there is plenty of diversity here and a number of clear highlights. It's a pity that a few tracks disturb the flow here, but it remains quite enjoyable as a collective whole.

Sometimes this album seems to be referred to as MCMXCII.