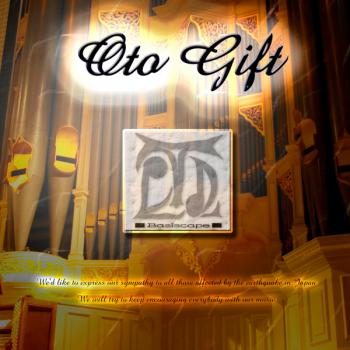 Oto Gift is a small EP released by Basiscape in the wake of the terrible tsunami and earthquake tradedy that hit Japan on March 11th, 2011. Featuring original compositions from every member of Basiscape, except Masaharu Iwata and Noriyuki Kamikura, it provides inspirational music to those affected by the recent events and those around the world. All the proceeds from this album's sales, which can be found on iTunes or Amazon MP3 for those in Western regions, will be donated to the relief fund for the victims.

The album opens up with a vocal composition by Hitoshi Sakimoto entitled "The Light and the Sunshine," sung by Yumi Matsuzawa, with lyrics from Final Fantasy creator Hironobu Sakaguchi. In atmosphere, it reminds me of the Lord of Vermilion II vocal theme, though there is definitely an aura of hope present in the soundscape of the song. The subtle percussion, orchestral tones, choral accents, and synth overlays really help create a very ethereal quality. It's an extremely powerful song that balances that feeling of hope, but also manages to showcase, subtly, the mourning involved with the natural disaster.

The second theme, "Cgac Edch" by Azusa Chiba, is a beautiful theme that fuses together some Celtic and jazz influences. The woodwind melody is extremely pleasant and uplifting, as if signaling the dawn of a new day, while the jazzy piano undertones really manage to provide an equally joyous sensation. The harmonies between these two instruments, combined with the soft percussion and acoustic guitar, really make for a welcoming and positive atmosphere.

Mitsuhiro Kaneda's "Tomorrow's Footstep," continues with the bright, uplifting atmosphere heard in Chiba's contribution. Accordion and piano are the dominant elements of this theme, as they create a very unique combination that provides an almost festive sound. The soft percussion and clapping help give off signs of encouragement to the listener, though Kaneda also throws in some somber tones as well. Overall, it's a very beautiful piece of music.

"con amore" by Kimihiro Abe, meaning "with love," is a solemn piano theme. It has a very romantic air with some jazzy undertones, like those one might hear in a smoky lounge at a bar. There is a lot of feeling placed in the performance and, while not as complex as some of the other themes, it manages to create a sense of sympathy through its progression.

The composition of Manabu Namiki, Basiscape's primary electronic artist, definitely deviates from the overall soundscapes featured thus far on the album. "Not Alone" is a bright and cheery electronic composition that definitely gives off a message of hope. The synth harmonies, which mimic orchestral strings, work wonderfully with the melody, while the upbeat bass line is infectiously catchy. Overall, this is one of my favorite themes here, mainly due to the bubbly nature of the composition.

Lastly, Yoshimi Kudo's "Harmonics" closes the album rather softly. Acoustic guitar dominates this theme, providing a very heartfelt and touching melody. The twang of the acoustic guitar strings really manages to provide a ton of emotion while the subtle woodwind accompaniment only accentuates the overall atmosphere of the piece. In the end, it's one of the most emotional themes I've heard Yoshimi Kudo compose and it's nice to see the softer side of someone who loves to provide edgy music to many of his works.

In the end, I think Oto Gift is a stunning display of compositions. It's clear that each composer put their feelings about the recent tragedy into their music through a variety of styles. For those of you who are fans of Basiscape, I highly suggest downloading this album. Not only will you get six wonderful themes, but at the same time, you'll also be helping towards the recovery of Japan after the recent events.

A charity album for 2011 Tohoku earthquake and tsunami. All proceeds will be donated to Japanese Red Cross.