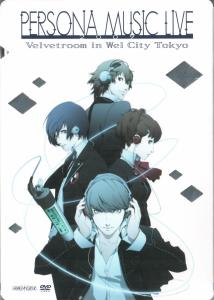 On August 22, 2008, a concert was held to celebrate the music of Persona in Akasaka Blitz, Tokyo. For one night Igor, the inhabitant of Velvet Room, opened the door to the realm between consciousness and unconsciousness to mere mortals. To the audience's surprise, Elizabeth and Margaret had summoned musicians to complement the surreal exploration of the Velvet Room. Lucky for us who couldn't take part of the ride, someone recorded the whole show. The recording was released principally on DVD, though the limited edition version of the DVD also featured a desperately short four track bonus CD.

"Battle Hymn of the Soul" opens the album with the pre-recorded intro of the original song from Persona 3. Live instruments kick in at 0:25: blazing electric guitars, orchestral synth, and a solemn piano. The live version of the Persona 3 epic mostly holds true to the spirit of the original track, adding more straightforward guitar riffs, yet carefully following the original structure. The magnificent aria the piece is known for isn't missing either, and it's performed by Shihoko Hirata, the vocalist of Persona 4. However, the perfect adherence to the aria of the original track arouses the suspicion of lip-syncing. The only downfall is its placement, as such an epic song should have been launched at the climax of the event, not as the opener. It is also one of the five tracks featured in the bonus CD.

The next rocky piece from Persona 3 is "Unavoidable Battle". It is more in line with the Reincarnation track than the original, abandoning the slow pace in favor of a frantic electronic-infused style. The live instrumentation isn't as polished and slick, however, so the strength of the Reincarnation version gets lost in the translation. Regardless, it's still a welcome instrumental interlude on the DVD. The pot of honey comes in the form of "Heartful Cry", which is similar to "The Almighty" in its structure and is superb thanks to it. The optimistic but blue piano opens the mood of the song and makes way for the guitar which tries to hide its sadness with courageous riffs. Before the guitar can weep, however, a heartful brass instrument tries to prolong its breakdown, but to no avail, as even optimism succumbs under the weight of the sadness, and the electrical beast cries from pain and suffering, healing the wounds caused by emotions in the process. Excellent!

The destructive piece of mass awesomeness on the album is "Mass Destruction" where Lotus Juice unleashes 15 kilotons of explosives in form of pulsating non-sensical Engrish. It's hard to deny that the live show with its cheesy imitation of mainstream rap is hard to take serious, but the moment the sexy female vocals hint at the beginning of the song, poppy brass, energetic guitars, and a frenzied turntablist make way for Lotus Juice, you'll know that no one from the audience is spared from the All-Out Attack executed by the performers. It's one of the few songs on the album that really benefits from live performance, partly due to the fact that MC's usually feel more home on the stage, and unsurprisingly it gets a spot on the bonus CD too. The surprise attack by Lotus Juice is followed with a jazzy love tune "Deep Breath Deep Breath", first released on the Reincarnation album. Kawamura's sexy "ta-ta-taa" is even more prevalent, while Lotus Juice takes a relaxing stance after his strong performance in "Mass Destruction", but doesn't let go of the flow. Before concluding there's a soulful saxophone solo so characteristic to Shoji Meguro. "Burn My Dread -Last Battle-" is even more masculine than "Mass Destruction", but the hot-headed approach of "Mass Destruction" is traded for machoness that isn't to my style, but I must admit the deviation in the end from the original track is a great addition.

The poppy side of Persona 3 is portrayed by Yumi Kawamura. "Burn My Dread", one of the highlights of P3, is a bit disappointing in its live incarnation, as it lacks the sad section of the Reincarnation version, where strings take the lead, and the instrumentation feels loose. Still, it's a marvel to see how the music intersynchs with the atmospheric visuals here, though some of that effect is lost on the bonus CD. "When The Moon's Reaching The Stars" is a real disappointment too. The vocals feel forced, the track takes the direction of Reincarnation, yet without the strings feels awfully hollow, and considering its short duration has not even an opportunity to develop enough. "Want To be Close" fortunately stays true to the Persona 3 original which is, in my opinion, superior over the arranged track. The downside is how short it is, clocking at 1 minute and 20 seconds! Considering the introduction of the brass in the end of the song, it's a wasted opportunity to not develop it further. In addition to the mentioned songs there's also "Memories of You", but I'll leave it for the end of the review.

Now I face out, I hold out, I introduce you the wonderful world of Persona 4. At the original show "Pursuing My True Self" followed "Battle Hymn of the Soul" and hence the piece is featured as the second item of the DVD and bonus CD too. At the show, the supposed aria singer revealed his true identity and jumped into the mixture of sexiness and sassiness that represents the original tune. It retains the atmosphere of the piece, but I can't help but to love the slick shell of the original more as was the case with "Unavoidable Battle". "Signs of Love" and "Heartbreak, Heartbeat" suffer from the same syndrome, but to a lesser degree. "Your Affection" doesn't take a drastic liberty with the source material, but the electric guitar concluding the loops contribute a lot to the atmosphere of the song. "Heaven" is even better in that department; the angelic saxophone improvisations and the celestial vocals that are even more divine than the original's make this one of the standouts of the album. "Never More", the ending song of Persona 4, also stays true to the spirit of the original song.

"Reach Out to the Truth" is best described as an adventurous counterpart to the original. The vocal performance is looser and more dangerous, but it lacks the naivity of the original I like so much. Still, it's a magnificent piece. "The Almighty" is the sole instrumental track of Persona 4 featured in the show, but man, how amazing it is, and I'd pay the full price even if there was only this track included. The one minute piano prologue is completely new to the piece, and I didn't even recognize the track before the guitars kicked in. The sweet piano is only an appetizer, because soon the robust and heavy electric guitar takes rightfully the centerpiece. The lack of clarity is compensated by the saxophone solo, which acts as the first refrain alongside the subdued piano, and replaces the synth of the original, which was a wise decision, because the brass is more appropriate and clearer for a live performance. The unleash of emotions through a powerful guitar solo so characteristic to Meguro's music isn't missing either, and the second refrain, like in the original, features the melancholic electrical guitar. "The Almighty" is a rollercoaster of feelings from the beginning to end, and I'm really mad that I couldn't have a chance to witness this tour de force myself live.

There are also the songs that appeared in the anime Persona: Trinity Soul. "Breakthrough", performed by Kita Shuuhei, is a real stinker in my opinion. It's a dull J-rock piece, having no originality, spark, nor decent vocals. I blame the boring performance on the track itself, because Shuuhei can be really good sometimes ("Memories of You", "Soul Phase"). "Suicide's Love Story" is a competent love ballad by Nana Kitade, but nothing special, and I'd take Otsuka Ai's offerings over Nana Kitade's any day. "Found Me" is another ballad and also the ending of the Trinity Soul anime, but it's much better than "Suicide's Love Story". The strings and Kawamura's powerful vocals are a good mix.

Moving on, "Mellow Dream" is a cheerful pop song featuring Yumi Kawamura as the singer. While not as good as Meguro's offerings, Iwasaki's juxtaposition of cool vocals and tropical vibes is pleasant enough. "Reverse the Destiny" offers a stark contrast to Meguro's "Mass Destruction", but both share the furious vocals of Lotus Juice. "Reverse the Destiny" is majestic and bold, but the live performance lacks the spirit of "Mass Destruction" and leaves a sterile impression. The hyperactivity of "Soul Drive" is matched by none, but it can be overly repetitive. Both tracks balance the DVD recording, but generally feel very synthetic and soulless.

Moving to the final track of the encore, "Memories of You" is an excellent choice for the closure. The brass interludes inject a feeling of great loss while the vocals of Kawamura instill hope in the hearts of the listener. It's perfectly suited for the conclusion of the show because it sums up the ups and downs of the games, but at the same hints at a bright future (more live shows, that is!).

Is this live CD/DVD worth it? It depends much on the person. If you're a Persona or Meguro fan, it's definitely worth a purchase. However, I'd recommend sticking with the regular release as the bonus CD is really limited in scope and doesn't even feature full recordings of the four tracks featured. But to those who are casual listeners of Persona's music, the DVD won't be that satisfying, especially when Atlus has already graced us with official soundtracks which offer a better experience. In the end, even with the video, nothing tops attending the concert yourselves.