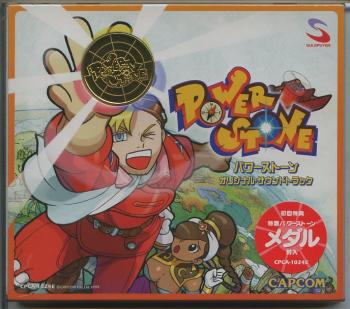 Following a disappointing debut, Tetsuya Shibata definitely shines in his first solo effort for Capcom. Power Stone is an addictive 3D fighting game for the Arcade and Dreamcast featuring a cast of ten characters. Its score features a variety of stylistic influences but is melodic and likeable for the most part. The Power Stone Original Soundtrack compiles all the music from the game in addition to bonuses such as an arranged track, a Dreamcast exclusive, and voice and sound effects collections. Let's take a closer look at why this release is so charming...

As with most fighting games, the main highlight of Power Stone are the stage themes for the ten characters. "Londo Stage" portrays the nobility of Edward with a strong trumpet melody against vivacious rolling accompaniment. While the trumpet synth is too piercing for the theme to be especially enjoyable, the string secondary section is very effective. "Manches Stage" represents a materialistic, morally ambiguous character with divergent elements; buoyant, slightly technofied bass and fleeting lyrical jazz phrases are presented with haunting synth vocal lines and eerie sound effects. Brother of the Fantastic Four's The Thing, Gunrock gets an appropriately elephantine theme; "Dawnvolta Stage" juxtaposes an intentionally cheesy pounding rock riff with catchy funk improvisations. Another member of the cast is Kraken the pirate, whose "Skull Haven" is a blend of crisis orchestration and sweeping interludes; even though it is derivative, this is one of the best themes within the game given it fits both the ghostly character and formidable setting so well.

Most of the remaining stage themes are inspired by music from across the world. Kung fu artist and ninja are similarly represented in the upbeat oriental themes "Tong-An Stage" and "Oedo"; the latter also expresses femininity with its dainty Chinese flute phrases surely inspired by the theme of Street Fighter II's Chun-Li. Samurai Ryoma is portrayed with infectious shakuhachi melodies in "Mutsu Stage" while fortune teller Rouge is given a rocked-up Arabian theme in "Mahdad Stage". Rounding off the clichés, "Dullstown Stage" provides a Latin American dance with Tijuana brass and congo beats, but it's catchy melody makes its difficult resist. Moving to the final stages, Valgas is given a introduction in "Avalon Island Stage 1" with a mixture of badass guitar riffs and layered synth vocals. Its follow-up is a bold orchestration characterised by rasping brass, dissonant accompaniment, and ferocious timpani. It won't win any awards for novel orchestration, but gets the climactic atmosphere just right. Melodic, diverse, and fitting, the stage themes are very enjoyable overall.

True to character, Tetsuya Shibata composes the subsidiary themes with an efficient no frills approach. "Opening ~ Title" creates an impressive bold sound, but it is actually a very simple but bombastic orchestration when stripped down to its core elements. There isn't much development in the "Player Select", "Stage Select", or "Winning" fanfares, which simply serve to create a suitably triumphant mood and encourage players to press on. Themes like "Power Fusion", "Valgas Fusion", "Final Valgas", and "Continue" are further examples of great impact being created with minimal elements. The ending themes are also treated as a triviality, most being short and repetitive. However, they are much more varied and enjoyable than those of Plasma Sword given Tetsuya Shibata goes to some effort to represent each character involved. As a result, there is everything from grandiose orchestration to oriental dances to catchy jazz or Latin numbers. There is even an endearing tribute to Koji Kondo's Super Mario Bros. ending themes in "Common Ending 1".

The bookends of the soundtrack best exemplify how Shibata's music can sometimes be very elaborate. The opening track "Day of the Manches" is actually a bonus arranged version of "Manches Stage". The enigmatic original undergoes a spectacular transformation into an upbeat track for big band. Shibata uses the ensemble very well here. He intersynchs passages featuring bold and witty trumpet melodies with very elaborate solo sections for keyboards, guitar, and drum kit. The arrangement also sustains a strong rhythmical groove and sense of direction throughout. The "Staff Roll" begins and closes with an intimate piano trio, but is dominated by one of the soundtrack's characteristic bombastic brass-led orchestrations at its centre. The piece has a very impressive dynamic range and, even though it is limited by synthesis, still manages to express certain nuances. The Dreamcast exclusive "Additional Mode" subsequently concludes the soundtrack with a short but sweet string quartet. Voice and sound effects collections follow, but they're nothing most listeners should be concerned with.

The Power Stone Original Soundtrack features great melodies, an endearing character, and plenty of stylistic diversity. Tetsuya Shibata does a great job where it matters, creating fitting and enjoyable stage themes for the cast and exuberant set pieces to open and close the album. He is definitely an efficient game composer whose primary concern is to create compositions that fit in the context of the game. While there are some less distinguished compositions, they are so unimportant in game context and short-lived on the soundtrack that they are entirely acceptable. Given the game otherwise demands such melodious and diverse compositions like, there's no doubt that the album offers something enjoyable for stand-alone listening too. It's a pity the sequel never received a soundtrack release.

Album was composed by Тэцуя Сибата and was released on March 20, 1999. Soundtrack consists of 54 tracks tracks with duration over more than hour. Album was released by Suleputer.