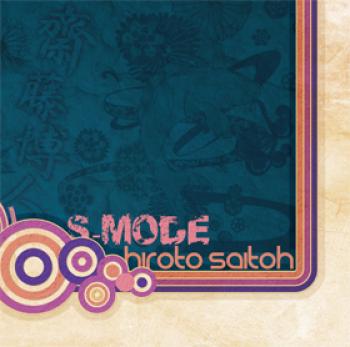 S-MODE is the most recent of Hiroto Saitoh's solo albums. Although he originally was going to keep the overall soundscape of the album as a techno style, he decided to incorporate a variety of styles in the end. To me, this is his best solo album to date. Although it only features six compositions, each one is definitely worth a listen.

The album opens with "Night Breeze." Hiroto's inspiration for this one was "soul". There is a fantastic jazz atmosphere with some definite soul music influences, although it's not as prominent as I imagined it would be when he mentioned it in our interview. The rhythm is really intoxicating and the combination of piano, electric guitar, and synth sounds, in addition to the various jazz instruments, of course, really makes for an energetic and entertaining listen. The piano is easily the best part of the composition though and it really carries with a distinctive character.

"Hard Beat (Remix)" was inspired by the "hard techno" style. While it's not as hardcore as some of the hardcore techno produced by Ayako Saso or Shinji Hosoe of SuperSweep, you can definitely feel a much defined "hard" style in it. Vocal samples, a funky, but industrial techno beat all combine quite nicely with jazzy interludes spliced throughout the piece. It's an energetic theme, to say the least, and really captures Saitoh's abilities to fuse together quite a bit of styles.

The next composition on the album is "Blue Moon Rise." The inspiration for this piece was "electronica." It features a nice techno beat that has a bit of an industrial influence. Stunning piano passages are coupled with ethereal and spacey synth to make for a layered and outstandingly developed composition. Once again, the piano really helps generate a fantastic mood, this one of peace, especially during the B section of the theme. Overall, it's a stunning theme and one that ranks high on my favorites for this album.

"Technopop" is the keyword when it comes to the next piece, "Toys in his Hands". This one is most reminiscent of some of the music heard on the Technictix related albums. Bubbly electronica helps create a very playful atmosphere and when combined with the jazzy influence of the melody line makes for a fantastic soundscape. In a way, it makes me feel as if I'm swimming on a tropical beach without a care in the world. But at the same time, some of the sound effects and sections of the piece make me think of a futuristic cityscape. This has to be my second favorite of all the themes on this album.

The next song, "Jazzpanese," is more in line with the music heard in previous solo albums. It has a clear jazz/lounge sound, the key inspiration for this piece. The majority of the piece, particularly in the melody line, features some exquisite Asian instrumentation, such as taiko drums, vocal chants, shakuhachi, and shamisen to give it the whole Japanese vibe, but at the same time, there is a defined jazz element as well. I also really enjoy the electronic elements added for extra compositional texture. It just has a very lush and diverse soundscape and makes for a very thrilling listen, despite its moderate tempo.

"Vermilion View" was inspired by "fusion" music. What I really enjoy the most about this entire piece is the clearly defined funk/jazz that dominates much of the piece. As for the electronica component to the score, it's mainly used in the accompaniment and really helps give the piece a nice backbone. Unlike many of the pieces, this one doesn't really focus on the piano. Instead, the funk guitar really defines this piece. It really helps give it a nice rhythm and established mood. Some of the synth solos though towards the end of the track really help spruce up the piece quite a bit. This is easily my favorite on the entire album.

In the end, S-MODE is Hiroto Saitoh's best solo original album to date. It features a lot of styles, each with varying degrees of jazz influence. If you are a fan of jazz fusion, this is definitely the album to get. Saitoh continues to grow as a jazz musician and I really look forward to his next solo album, whatever that may be. Although this was released at a Japanese event in May, it's available, or will be soon, on Amazon Japan, so definitely try to pick it up if you can!

Album was composed by Хирото Сайто and was released on May 05, 2010. Soundtrack consists of 6 tracks tracks with duration over about 30 minutes. Album was released by Lilt Records.