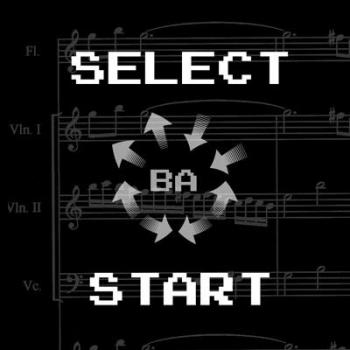 At least nine-tenths of the video game remixes that have been written by the fan arrangement community are of the rock or trance variety. Live classical arrangements, like those found on the group's eponymous album, are almost unheard of. That's why one might be excited upon hearing that such string-based arrangements do exist. Select Start, however, does not prove that live violins and classical instruments can be performed successfully by video game music fans. Instead, the music completely lacks feeling, and its robotic quality will turn off many listeners.

According to the group's website, Select Start was formed in Gainsville, Florida, in 2002. Consisting of six members, only one of whom is pictured playing an instrument not found in a traditional orchestra, the band states that they have played over fifty live performances in a number of venues. The only album released by the group at the time of this writing, the eponymous Select Start, can be downloaded from the group's website free of charge. The album's free distribution, combined with the interesting premise, is reason enough for me to recommend a download regardless of any other merits.

Unfortunately, though, the music of Select Start clearly sounds amateurish. First, the album is not as much a fan arrangement as a straightforward performance of many NES-era video game tunes with different instruments. Second, and more importantly, the players play with a lack of emotion. Instead of feeling the songs, the album sounds as if the band members are simply reading sheet music and repeating it verbatim. Rather than long, flowing notes, there is endless stacatto. Whereas live music is generally considered superior to sequenced music in its ability to express emotion and character, the way the band plays this music eliminates any benefit of performing it live.

The tracks hail from a number of 8-bit games, but they are mostly concentrated in the RPG genre. The album starts off with themes from the original The Legend of Zelda, which are too slow and methodical for my taste. The "Dungeon" part of the medley is repetitive and never seems to progress. It would have been awesome if, after two or three repetitions, an electric guitar made a resounding entrance. The guitar would have been a stark contrast to the strings and would have added something to this straightforward arrangement of a very limited melody.

The next track, "Frog's Theme", highlights another weakness in the group — its string section does not contain any violas. A traditional string quartet will usually contain two violins, a viola, and a cello, while this group consists of two violins and a cello. The omission is very noticible, as there are no middle tones in "Frog's Theme", as would be expected from a viola given the instrument is a perfect fifth lower on the scale. Because of the difference of a perfect fifth, playing the same strings on a violin and a viola will create beautiful harmony. Playing two violins together, however, adds little, especially when there are so few instruments in this group. Because the viola is missing, the music lacks variety and sounds as if the harmony is missing, despite the attempted use of the flute to achieve the same end.

Later, "Kraid's Hideout" has a lot of promise. I was impressed the first time I listened, especially to the few bars where the music changes. While "changes" isn't very descriptive, one has to listen to the arrangement to understand that there are a few sections that are vastly different than the rest of the tune. The problem with this track is that it is still very repetitive and that the most interesting parts are not elaborated upon. The group strikes gold for a little while, but then trucks out a load of rocks from the mine. Perhaps I have different musical tastes than most people, or perhaps the group should have had more people listen to the CD before it was released.

Perhaps shockingly, the highlight of this album seems to be "Time's Scar", from Chrono Cross. Having listened to the perhaps 500-strong collection of Chrono series tracks the video game arrangement community has produced over the past decade, this rendition of Time's Scar, while short, proves that it's not necessary to go overboard with elaborate production to create a decent track. "Time's Scar" is also a fairly difficult song for a violinist to play, which makes it all the more surprising that Select Start managed to do well with this one. I found myself wondering whether, had the group stuck with more upbeat and frantic songs like this one, the album could have been of a much higher caliber.

While I could detail every song on this album, the remainder of the tracks mostly meld together, as they are very safe arrangements that don't break any new ground. While such performances might have been novel in the '90s, most of these songs have already been done before, and were mixed better than they have been here.

Select Start is a band that has a lot of promise, but which needs to work on its performance ability in order to produce a higher quality product. The album Select Start sometimes sounds as if amateur musicians are just learning to play their instruments. If the band members had practiced more before releasing their recordings, I might have been lauding how the group's orchestral focus brings something new to the video game remix community. As it turns out, however, Select Start is a disappointment of mediocre and unimaginative works that are not up to the level of many other fan-arranged albums.