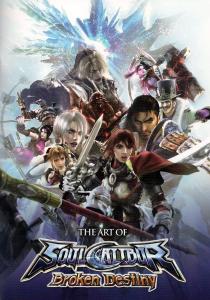 Soul Calibur: Broken Destiny is a critically acclaimed PSP spinoff of the Soul Calibur series of fighting games. The Namco Sound Team returned to craft the music for this entry, using epic orchestral writing to depict the style of the game and streaming technology to achieve realistic sound. Series' veterans Junichi Nakatsuru and Keiki Kobayashi crafted a mixture of new compositions and arrangements for the score, though the majority of the material is rehashed from other games. It therefore feels fitting that its soundtrack release provides more of a commemoration of the series. Featured with the artbook given out with pre-order bonuses of the game, the Soul Calibur Broken Destiny Best of Soundtrack compiles the music for Broken Destiny and a selection of other favourites from the series into a highly enjoyable CD. Let's take a closer look...

The soundtrack opens with the new compositions and arrangements for Soul Calibur: Broken Destiny. The selection is ten tracks long, but only four of these are original compositions. The opening theme immediately sets the epic orchestral tone of the soundtrack complete with its bold brass and booming percussion. Due to the brief length of the cinematic, this piece clocks in at just 1:21; yet it packs so much drama and excitement into that playtime that it sounds surprisingly fulfilling. Nakatsuru's subsequent contributions, "Battle Cry" and "One's Mark in History", adapt the familiar tone of the series to prepare for the onset of action, the former a bittersweet anthem, the latter a rousing march. Despite being a PSP game, their sound quality is very high in these three themes, even if not quite up to the exceptional standard of Soul Calibur IV. It's somewhere between Soul Calibur II and Soul Calibur III in quality and that's certainly no mean feat.

Arrangements from Soul Calibur IV actually dominate the Soul Calibur: Broken Destiny selection. Tracks such as "To the Wind", "Destiny Will Tell", and "Mystic Mystique" maintain the vigour and lyricism of their originals despite suffering a minor downgrade in sound quality. Nakatsuru's "Afterglow - A Silent Prayer" is more transformative; he marvelously elaborates upon "Immaculate Pledge" to give a track even better than the original. Meanwhile Keiki Kobayashi considerably improves "Innocent Vision" — beautifully juxtaposition of shakuhachi wails, passionate strings, and world percussion from start to finish — while offering an orchestral bombastic tone to Masaharu Iwata's once organic "Halcyon Harbor". Nakatsuru's "Who's Stepped On Her Tail?" is a nice way to conclude the section with a comical march. Despite its silly tone, it is perhaps the most classically-oriented entry in the album and demonstrates once more Nakatsuru's command of the orchestra.

The rest of the album features three selections from each of the earlier main Soul Calibur games. Takayuki Aihara's themes from the original version of Soul Edge enjoy a quality boost here similar to Project Soul - The Primary Box. The resonant oboe and driving snares of "Dragon's Call" have never sounded better. Meanwhile "Recollect Continent" sounds in line with other marches on the soundtrack, except with a slightly different melodic approach, while "The Gears of Madness" is an exceptionally bombastic and rhythmically agitated yet somehow compelling. The Soul Calibur contributions are also enjoyable, but don't quite sport the same compelling orchestration as other entries. "Duelists" once again demonstrates Nakatsuru knows how to produce commanding brass melodies, but perhaps its main draw are the gorgeous interludes. Meanwhile Akitaka Toyama and Yoshihito Yano bring their own musicality to "In the Name of the Father" and "Chasing Downstream", but the former sounds a bit harmonically sterile and the latter slightly disjointed.

The album demonstrates what Nakatsuru brought to subsequent scores in the series. Soul Calibur II's "Unwavering Resolve" features so much more colourful orchestration than its predecessors. Meanwhile the use of electric guitar in "If There Were Any Other Way", organ in "Hellfire", and Arabian instruments in "Call of the Ancients" could have been gimmicky, but is artistically achieved; it works well in and out of context while bringing some much-needed variety to the CD. The other selections from Soul Calibur III, the heroic "Sail Over the Storm" and foreboding "Endless Warfare", adopt familiar tones yet are implemented even more convincingly than their cousins. But there's something about the use of the Eminence Symphony Orchestra on Soul Calibur IV that gives the score an upper hand. Keiki Kobayashi uses the ensemble to inspire intense imagery of battling in "Phantasmagoria". Meanwhile the seven minute ending theme "Path of Destiny" adopts a similar arrangement to the Soul Calibur III, but benefits from the potency of a full orchestra. It's A good choice to end the album.

The Soul Calibur Broken Destiny Best of Soundtrack is certainly a pre-order bonus worth cherishing. The track selection captures the style and emotions to expect from the Soul series' music and there are plenty of definitive greats here. The Soul Calibur: Broken Destiny score seems to have very little new material, but what is present is good musically and technically, and it's great that these tracks have received some sort of stand-alone release. It's just a pity Basiscape's score for Soul Calibur: Legends never received a similar treatment. Another interesting feature of this album is how it all comes together to form a cohesive whole, both due to the continuous orchestral style of the series and the use of high quality or remastered synth. Though occasionally samey, each score in the main series seems to get better and better while the PSP spinoff seems to provide a worthy nod to the rest of the music in the series.

Enclosed with the Artbook that comes exclusively with pre-orders of the PSP game.