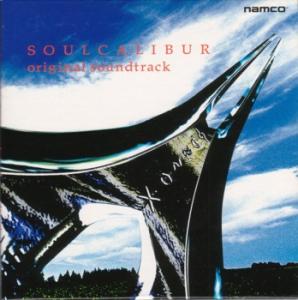 Soul Calibur is one of the most highly praised fighting games yet to grace a console. Notable for superb graphics and an immense attention to detail, it has become a deserving classic. Given the game is set in the 16th century, the score is 'suitably' orchestral making it a welcome contrast to the heavily rock-based scores of games such as King of Fighters, Tekken, and Street Fighter as well as the console edition of its spiritual predecessor Soul Edge. It will be interesting to see whether the orchestral sound normally favoured by RPGs will function well in context lacking pounding bass and the good old hi-hat. The soundtrack is composed by the quartet Junichi Nakatsuru, Yoshihito Yano, Akitaka Toyama, and Takanori Otsuka with Nakatsuru writing the bulk of the tracks. This soundtrack has acted as a spring board for the principal composers (Nakatsuru, Yano, and Toyama) making contributions to Ace Combat, Katamari Damacy, and Tekken in subsequent years. While the main commercial release of the soundtrack is in Japan, it has been recently made available overseas through iTunes.

The opening track "Light and Darkness" sets up the mood perfectly for the opening movie of the game which introduces the main playable characters. The melodies are heroic and the orchestration is very effective with its abundance of bombast and grandeur. Unfortunately the track has a few balance issues such as overbearing timpani and piano, but I admit it adds a dose of aggression to the track fitting for a fighting game. We are then treated to the character select theme "The Stage of History", which is in a similar mood to the previous track but I find the balance to be greatly improved; the timpani only really gives its all during the harsh orchestral hits rather than through melodic sections.

We then come onto some of the themes for the different locations used in Soul Calibur. Nakatsuru gets off to a brilliant start with some excellent pieces including the dynamic "The New Legend", oriental "Bloom and Harvest", and superbly heroic "Sail Over the Storm". "The Duelists", in particular, deserves note as my favourite track on the soundtrack. Each of these tracks is melodically potent, as well as being appropriately vibrant and heroic. That said, the instrumentation is a little derivative in these themes and lacking in variety, relying on loud brass and crashing cymbals to provide intensity rather than any rhythmic intricacy. The amount of times the composers use the same 3-3-2 and 3-3-3-3-2-2 rhythmic patterns is staggering.

Yano complements Nakatsuru's contributions to the track. For one, his tracks indulge much more in various different forms of percussion. They vary from the tribal drums used in the intense but unsatisfying "Sweet Illusion" to the snare drum of the dramatic "Bred From The Gap". Some of his enjoyable efforts are the exciting 5/4 coda of "Beyond the Horizon", which involves some exquisite modulations that really get the adrenaline pumping, and the movingly noble "Worth Dying For" with its passionate violin and horn melodies. However Yano most significant contribution to the album is "Recollection: A Tribute to Those Who Shed Red", which concludes the soundtrack very appropriately with perhaps the most heroic theme of the lot, executed with an awful lot of cymbal crashes and timpani strikes. The most satisfying part is very easily the calming interlude with a very colourful pizzicato accompaniment to the oboe and violin dialogue — it gives us a very welcome rest from the bombast of the main body.

I can't go further in this review without mentioning Nakatsuru's "Going to Where the Wind Blows". It has the most touching melody in the soundtrack although it does meander significantly. There are three different versions to choose from on the album. There is a full blown orchestral version and a simpler oboe, harp, and horn version on the first disc. These two are a little schmaltzy for my taste although the oboe does carry the melody very well. I find the piano mix on the bonus four track second disc to be more effective. Along with the 'Piano Mix' is a 'Soul Mix' of the opening track "Light and Darkness" also crafted by Nakatsuru. Although the balance is improved, it has lost its passion and intensity to a significant extent making it a rather unsatisfactory edition to the rather perplexing second disc. On the bonus disc, Yano also offers a recapitulation of the "Recollection..." track as well as a track that seems to be exclusive to the Arcade version of the game called "Under the Star of Destiny". The latter is definitely not one of Yano's best pieces on the soundtrack and gives more reason to avoid most of the second disc.

Toyama's output was smaller in comparison to the previous two composers and I felt of lower quality too. His standout track is "Unblessed Soul", which provides an effective gothic feel with some very nice organ and harpsichord passages; however, it is evident even from this very enjoyable track that his melodic capabilities aren't up to the standard of Nakatsuru and Yano. "The Cursed Image" has some appealing use of percussion, but the flute melody is soulless and hinders the track significantly especially following the stellar "The Duelists". "Leave the World Behind" and "Immortal Flame" again have some interesting touches in particular the latter's ridiculously fast violin runs but they both left me feeling very underwhelmed and I lost interest in the tracks quickly mainly due to a lack of a melodic hook to keep me focused. Otsuka's contributions consist of five short cinematic tracks towards the end of the soundtrack. They are frankly mediocre in comparison to the rest of the soundtrack and offer little melodically, technically, or functionally It is no wonder we do not see much of him after this soundtrack.

Overall I consider the soundtrack to be a strong effort with a great many appealing tracks in its arsenal. However I feel it is lacking in real standout pieces going for a more consistent appeal and also that some composers (Nakatsuru and Yano) were significantly more proficient in their output than others (Toyama and Otsuka). The second disc was a very peculiar affair — only consisting of four tracks, most of them underwhelming — and I'm not sure I see the point of it. Even with its flaws, this soundtrack is a spectacular and well crafted work. It works very well in context capturing the intensity of battle but being appropriate to the game's overall aesthetic. Musically it lacks a little variety but the melodies are memorable and potent, particularly for a fighting game soundtrack. If you prefer your soundtracks to be subtle affairs, this is possibly not the album for you but if you can admire an album that delivers intense if a little cheesy orchestration with some great tunes, you can't go wrong with Soul Calibur. It represents a delightful and refreshing change to the rather stagnant fighting soundtrack genre.