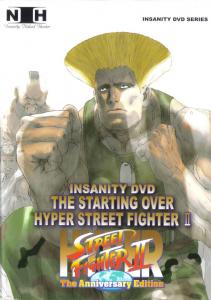 The number of Street Fighter II arranged albums is especially large, but in my opinion few albums have gone beyond being a fan service or quirky experiment. An exception is the relatively new Hyper Street Fighter II Remix Tracks produced by music production company Basiscape. The likes of Hitoshi Sakimoto, Manabu Namiki, and Mitsuhiro Kaneda teamed up to create an experimental and diverse album filled with different stylistic and cultural references. The album was packaged with a gameplay DVD and technical booklet into a pricey set to commemorate the Hyper Street Fighter II: Anniversary Edition. However, these remixes are distinct from the relatively straightforward ones featured in the arranged mode of Hyper Street Fighter II. Let's take a look at the gold offered here...

Mitsuhiro Kaneda opens up the album in style with a moody jazz arrangement of the originally calypso-flavoured "Dee Jay Stage". Kaneda creates an urban feel by blending thick piano grooves, subtle electronic overtones, and a rich percussion set. The choice of a Fender ES-335 guitar to interpret the melody was an excellent one since it creates a serene and atmospheric sound to contrast the edgy accompaniment. Kaneda shows prowess over the piano with his thick chords and elaborate improvised solos. The arranger also demonstrates his flair for nu jazz with an incredibly fresh arrangement of "Cammy Stage". This time a violin treats the melody in a passionate way underneath bubbly electronic beats. Once again, the emotional yet dissonant chord choices on this arrangement are fascinating and give an insight into Kaneda's wider musicality.

The most emotional arranger of the disc is probably Yutaka Kumada. His arrangement of "T. Hawk Stage" has a suitably exotic flavour due to the combination of an accordion lead, flamenco guitar solos, steel drum breaks, and buoyant electronic beats. The centre of the remix also features a very passionate solo by an African vocalist similar to Youssou N'Dour. This fusion of styles is very well done throughout the arrangement and there are plenty of amazing moments. His interpretation of "Guile Stage" has a groovy and modern feel. Like Kaneda's "Dee Jay Stage", he gives a semi-hollow Fender the melody, but uses it a more upbeat way. It creates a very nice sound against the laid-back supporting beats. The remix also features female backing singers and a flashy electric guitar solo. A fairly linear arrangement, but the soundscapes are beautiful and the melody is enjoyable.

There are a few more straightforward arrangements on the disc. It was a little disappointing to see a jazz fusion focus on both "Fei-Long Stage" and "Sagat Stage" after other arrangers such as Yuji Toriyama had done the style to death. Nonetheless, Yasushi Asada proves a great arranger since since he blends great electronic guitar melodies and solos with some fascinating accompaniment. He treats Sagat's theme better than any arranger before him — contrasting the meditative yet oppressive elements of Sagat's melody while offering lush interludes and even a great steel-stringed guitar solo. Masaharu Iwata's no frills interpretation of "Dhalsim Stage" homages old-school game music by focusing on the ecstatic melody and energetic electronic beats. In a similar way, Namiki recreates the light-hearted melody and nostalgic feel of "Blanka Stage" while integrating some complex electronic features.

There are a couple of extremely abstract additions to the disc. Kimihiro Abe's album debut "E. Honda Stage" will leave many listeners utterly confused. He creates a web of unsynchronised rhythms by layering all sorts of forces atop obsessively repeated motifs and beats. The multipart arrangement successfully recreates the atmosphere one might expect from a jubilant festival in ancient Japan. However, not all will understand it and it takes many listens to fully appreciate. Hitoshi Sakimoto saves his appearance to last with an industrial-rock arrangement of "M. Bison Stage". Just when people think he might have exhausted his possibilities, Sakimoto demonstrates his versatility once more with this. It captures the brutality of the final boss perfectly with heavily punctuated bass lines, pounding exotic drums, and wild overdriven guitar. Not all will like it, but it's certainly fitting and creative.

The Hyper Street Fighter II Remix Tracks features unforgettable melodies treated by especially creative musicians. All the arrangers make an excellent contribution to the album — whether the jazzy Mitsuhiro Kaneda, exotic Yutaka Kumada, rocking Yasushi Asada, nostalgic Masaharu Iwata, electric Manabu Namiki, eccentric Kimihiro Abe, or radical Hitoshi Sakimoto. Each offers a well-developed, stylistically distinctive, and emotional remix that also captures the melodic genius and cultural diversity behind the original score. There are a few downsides to the album. For one, it only features ten arrangements when there were in fact 17 character themes in Super Street Fighter II Turbo; what's offered is enough to create a satisfying album, but may leave people longing for some amazing Ryu, Vega, or Akuma stage remixes. Perhaps more importantly, this can only be bought as part of an expensive DVD-CD set featuring material strictly intended for hardcore Street Fighter II fans. An amazing listen nonetheless.