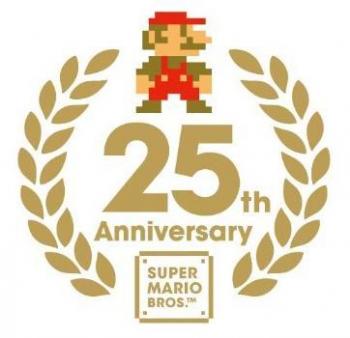 In 2010, gaming's most iconic series — Super Mario — celebrated its silver anniversary in an exuberant manner. The most notable of their commemorations was the release of the Super Mario All-Stars Limited Edition (known in Japan as the Super Mario Collection Special Pack). The Japanese edition of this compilation included a special soundtrack featuring an original track from each of the ten main games in the series, spanning 1985's Super Mario Bros. to 2010's Super Mario Galaxy 2. While the broad nature of the selections is appreciated, there simply isn't enough of them for this compilation to fully satisfy.

The collection opens with the most famous theme in video game history: the Super Mario Bros. main theme. The track has impacted on tens of millions of individuals with its whistleable melody and Latin flavourings. Not all will appreciate its simple structure and chiptune synthesis — the track in many ways synonymous with the dubious reputation of video game music — though Koji Kondo's creation is still impressive given the technical limitations of the Nintendo Entertainment System and many still find it enjoyable 25 years on. An iconic part of video game history, it's the ideal headliner for this release.

There are several other retro tracks featured on the collection. The main theme from Super Mario Bros. 2 (actually a North American adaptation of Yume Kojo: Doki Doki Panic) and the athletic theme from Super Mario Bros. 3 both maintain the light melodic focus of the series while still accommodating the three channel limitations of the NES. Just like Dragon Quest's music, both tracks have a pastiche quality that is charming yet somewhat bittersweet at the same time. The overworld theme (or, aboveground theme, if you prefer) from Super Mario World has a richer sound set from the Super Nintendo and features a melody that was extensively arranged throughout the game. All three are memorable and representative choices of the scores.

Moving on to the series' 3D titles, "Slider" is a fun representation of Super Mario 64. It isn't quite as definitive as the game's main theme, but is still very catchy with its blend of banjo and whistle. While generally regarded as one of the series' weaker scores, the GameCube's Super Mario Sunshine also receives a respectable nod with Kondo's encompassing guitar-based theme for Delfino Plaza. Of course, Mahito Yokota's acclaimed orchestral scores for the Wii's Super Mario Galaxy and Super Mario Galaxy 2 receive some attention too with their full orchestral ending themes. Both were smart choices, since they tie together the scores thematically, while capturing the epic yet inviting galactic sound.

There are only technically two exclusives on this album. One is the overworld theme for the DS' New Super Mario Bros., composed by Koji Kondo contrary to popular belief. A great homage to the series' retro scores, the track features plenty of catchy hooks, a mixture of chiptune and acoustic synth, and even a few amusing synth vocals. Ryo Nagamatsu's title theme for New Super Mario Bros. Wii, on the other hand, leaves me relatively cold. It definitely captures the Mario sound, but also feels a little contrived in its synthesis and rhythms. Nevertheless, both scores are fertile grounds for future musical releases, whether commercial or promotional.

The soundtrack ends with ten familiar jingles from Super Mario Bros., ranging from the sound effects of jumping and descending, to the fanfares at the end of a course or world. These are cute gimmicks, though have been featured in a range of releases before. I suspect most gamers would have liked ten more selections from each of the games, given there is so much other great music from the Super Mario series. The Underground Theme, World's Ending Theme, Bowser's Road, Gusty Garden Galaxy... The list goes on.

At just 25 minutes in length, this collection is not a definitive representation of the Super Mario series. The series' music is rather fiddly to purchase, though releases such as the extensive Super Mario World album and the two Galaxy soundtracks are far more satisfying than this. This collection will still inspire plenty of nostalgia and certainly reflects a 25 year legacy with a range of great tracks, yet it is simply not extensive enough to be of long-term value.

Tracks 8 & 10 performed by the Mario Galaxy Orchestra.
Album was composed by Кодзи Кондо / Махито Ёкота / Рё Нагамацу and was released on October 21, 2010. Soundtrack consists of 20 tracks tracks with duration over about 25 minutes. Album was released by Nintendo.