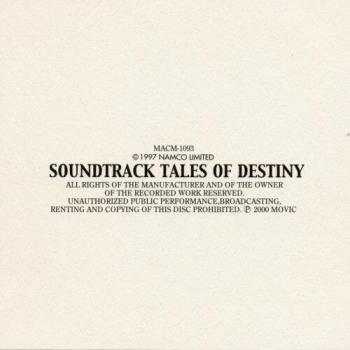 Motoi Sakuraba and Shinji Tamura return as composers for the second entry of the beloved Tales series after the success of the first game Tales of Phantasia in 1995. Three years after the release of the game itself the soundtrack was released and holds a special place in my heart as it's one of my favorite soundtracks in the series next to the original thus far. A simple classic full of nostalgia.

The theme song "Yume de Aru Youni (Like a Dream)" is a rock ballad performed by the famous J-pop band DEEN. It is done beautifully with warm vocals together with catchy piano and rock instrumentation. It's simple, but one of my personal favorite opening themes in the series because of the fitting and heart-warming atmosphere. "Tales of Destiny" sets the mood of the score with its eerie and mysterious aura. The harp and bell argeggios together with the strings symbolize a feeling of fate, determination, and mysticism. The next two tracks are climatic and suspense themes used for the introduction scenery. While "Crooked Sight" has a touch of danger and foreboding within created by effective orchestral instrumentation, "The Storm and Stress" features Motoi Sakuraba's usual synth rock. It's also one of my favorite tracks from the beginning. The first section features a slow developing atmosphere created with gorgeous piano chords and strings, the second section is more fast-paced and frenzied with synth and percussion to symbolize the danger.

There is evidence that Sakuraba and Tamura elaborated on their approach to Phantasia on this soundtrack. The bright and heroic march "Unfinished World" is the game's overworld theme and fits its purpose very well. The soaring brass chords, gentle strings, and engaging percussion are used well here and help to bring up the right adventurous atmosphere for the scenery. "Mysteries Night" and "Conceal One's Sorrow" feature the same harp line and bells, but both have a different atmosphere — the first solemn and peaceful, the second depressing and sad. "Despair" is also one of those typical sad themes with effective use of string ensemble, bells, and acoustic guitar to deliver an depressing and gloomy atmosphere. Finally out the darkness, "I Feel So Happy Today" couldn't have been named in a better way as it describes exactly this feeling; very lighthearted and bouncy in a typical Tales manner. "Cry for the Moon" has an interesting piano and string line, but is essentially too repetitive. One of those tracks where I prefer the arranged version instead of the original. Another pleasant theme is "Walking to Tomorrow" with its blues style and harmonious piano chords. The ending theme "Leave for the Future" is a typical fantasy-inspired piece full of emotion and soft orchestral arrangement. It shows one of the first soft tries from Sakuraba to compose an cinematic theme in the series, which he used a lot in later following scores.

The town themes "Green Hill", "A Kingdom", "The Laughter of Children", and "Port Town" are all unique and extremely enjoyable themes with catchy melodies and pleasant arrangements, from baroque and orchestral to bouncy and lighthearted. But away from the light, "Solemn Castle" and "A Sanctuary" are Motoi Sakuraba's answer to Castlevania with gorgeous use of gothic church organ, choir, and harpsichord. Definitely among of the highlights from the soundtrack. The synth returns in another interesting track namely "A Submarine Remains". At first listen it might sound a bit chaotic and annoying, but it'll satisfy with its development, especially in the last section with its weird use of synth vocals and effects. There are several interesting styles here on the first disc, such as the samba touched "Will You Dance With Me?" with its catchy use of piano and percussion, the jazzy "Passion" reminiscent of the Mario Kart series, and the Spanish "I'm a Champion" with its flamenco guitars and percussion. Another of my favorite tracks is "White Kingdom" with its glorious and heroic nature. Even if the arrangement with its synth lacks a bit, the melody is fantastic. The same goes for "Over the Rainbow" and "Preview Edition". There are also two unused tracks and some jingles from the game, but neither of them are noteworthy.

As for the battle themes Motoi Sakuraba has created a hand full of exciting tracks. The boss themes "Nightmare" and "Relentless Assault" are actually weak and more confusing than entertaining with their overuse of weird synth and percussion. However, "Bare its Fangs" shows Sakuraba's talent to create catchy battle themes once again. While the track itself shows huge similarities to other battle themes melodically, for example Tales of Eternia's "Inferia Battle" with its identical introduction, the track is very motivating and entertaining. One of his catchiest battle themes from earlier times for sure. Another highlight is "Lion - Irony of Fate" with its fast harpsichord melodies, percussion, and woodwinds. It's a bit too short, but I like the determinated atmosphere this track symbolizes. "Blue Dragon" is also another favorite of mine with its catchy use of piano and distinctive rock organ use. "Heat Wave" is also an interesting and rocky composition, even if the instrumentation lacks a bit; the massive use of synth is very catchy and fun to listen to here. Coming to the conclusion, the last battle theme "Rebel Against Destiny" is in similar style to Tales of Phantasia's contributions with its fast-paced rhythms, memorable synth melodies, and heroic moments.

Tales of Destiny has an fine soundtrack created by both composers. Every track fits into the game and underlays the atmosphere right on. While the first disc is more positive based with a lot of happy and catchy tracks, the second disc sadly is a bit less effective with more electronica and fewer memorable tracks. Motoi Sakuraba's battle themes are as good as ever; "Bare its Fangs" is one of the catchiest normal battle themes he created in that time and will get its deserved arrangement in the PlayStation 2 version. But mostly the pieces are too short and not too well developed as we are used to hear from him sadly. This score is definitely worth of listening as it's one of the more emotional and inspired Tales soundtrack in the series. In 2006 was also released a remastered score for the PlayStation 2 version of this game with enhanced quality and arrangements, however some tracks are better in its original charming version which you can find in this soundtrack.

All track arranged, composed and produced by NAMCO.