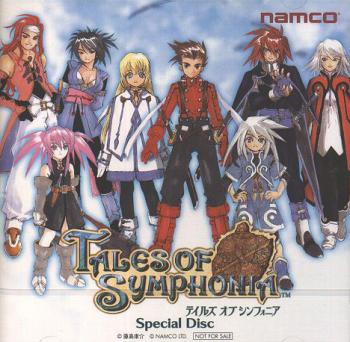 Much in the same way as Square Enix and other game developers, the arrival of the original PlayStation caused Namco to rethink their allegiances. Having previously released Tales of Phantasia, the earliest and arguably the most popular of the 'Tales' games on the Super Nintendo, the company chose to re-release the game on Sony's powerful first entry into the console market, which seemed all set to beat the less popular Nintendo 64 in its generation. Since then, Namco have released most of their RPGs on the PlayStation and its huge successor, PlayStation 2. In this time, Tales of Destiny, Tales of Eternia, Tales of Destiny 2, Tales of Rebirth, and most recently Tales of Legendia have seen exclusive Sony releases and the recently announced Tales of the Abyss is likely to follow a similar trend. All bar one have to date, and that exception is Tales of Symphonia, the black sheep of the series. Tales of Symphonia, unlike the rest, was originally released for the Nintendo Gamecube. Produced by the Tales Studios offshoot 'Team Symphonia' (who will also be responsible for Tales of the Abyss), this particular instalment baffled fans, as Sony had been Namco's main target audience since the days of the Super Famicom, and this sudden foray back to into the world of Nintendo was seemingly unprovoked.

Funnily enough, little was different about the game — in the usual 'Tales' tradition composers Motoi Sakuraba and the ever-present Shinji Tamura were hired to create the music score and many of the classic gameplay traits were kept in tact. Ironically, after sales had dropped due to the switch in format, Tales of Symphonia was ported to the PlayStation 2 after all — it was only the Japanese Gamecube buyers that obtained the Tales of Symphonia Special Disc with their copy of the game, though. The disc was basically a soundtrack promotion, featuring four hand-selected tracks from the game, in an attempt to raise a musical awareness about the game. Sakuraba, had of course, completed one of his highest acclaimed works to date in the Baten Kaitos soundtrack and was likely hoping to band his name around a little more. But were these four tracks actually any good? After all, the soundtracks for the 'Tales' series have never been Sakuraba's most popular musical works.

As ever, the title screen music "Tales of Symphonia" is a short piece primarily intended to prepare the player for the vast adventure that lies ahead. Since it is the 'title track' its inclusion on the Extra Disc was appropriate, but lacks meaning. It is peaceful and nicely introduces one of the main themes, but seems very short and non-descript seeing as it is one only four tracks on the album. It begins with some bells, a woodwind instrument and strings that instantly assert Sakuraba's usual musical style — predictably, we have a harp and some synthesized brass that enter shortly afterwards. What is quite clear from the start is that the sample set is nothing special; very ordinary in fact, and barely show the transition from the PlayStation to a next-generation console. It is thought that this might have something to do with the enigmatic Shinji Tamura, whose role in the Tales soundtracks has always been somewhat of an uncertainty. It is clear however, that Sakuraba is not using the high-powered synths he has used for the Star Ocean series, Valkyrie Profile, and Baten Kaitos, which is decidedly odd. Perhaps Tamura or somebody at a senior level has demanded that a feeling of nostalgia be kept about the games through the old-fashioned music. "Tales of Symphonia," in conclusion, is a simple track that gets its job done, but sounds little different to any other title screen track from the series.

It is nice to hear that the second piece on the CD, "Trip on the Ship", is actually a full-length track from the game. As is implied by title, this number is played when you are using the ship on the overworld map. It takes on an appropriate light-hearted feel, and it is nice that it is dominated by Sakuraba's usual brass, and that it rather underscores the other instruments. The rising and falling harp gives a feeling of air rushing past you, while the strings and flute give it the more majestic feeling that is needed to represent a whole new way to get around the world. Of course, since the CD was included with the game, this music will only probably only be listened to by the gamers, so it is important to realise that the tracks picked are likely to be ones that these people will instantly associate with the game. I personally found this piece to suit it's purpose perfectly, and listening to it by itself does bring back memories, though I would certainly not say it was one of my favourites from the final soundtrack. It is a good song, but nothing special.

"Over the Planet" seemed a particularly peculiar choice to me. "Water Symphony~Despair~" is, in fact, the alternative version to the piece of music that plays in the town of Luin. As the music clearly conveys, when this is played in the game, Luin has been destroyed and the houses are in ruins. It is not completely without hope though, as there is sidequest in which you can partake which allows you to rebuild Luin by donating various sums of money. The track itself is fairly melancholy, but suffers a lot from being overly simple. This may be a fault with the original composition though, as this is technically an arrangement. The use of the piano was quite nice, if a bit short, and was probably the highlight of an otherwise undeveloped piece. It definitely feels like it loops too quickly and never escapes that overriding simplicity that prevents its success, and is a common occurrence throughout the final soundtrack. As with "Trip on the Ship," it is a mediocre track that is easy listening, but really uninspiring at the end of the day. It is nothing new; typical 'Tales' music then.

It is probably the final track, "A Snow Light," which has the privilege of being the best composition on the short CD then. Something about the melody is unusually appealing, and the choice of instrumentation helps to give the town of Flanoir the snowy, wintry feeling it should have, without dispelling the overall light-heartedness. In fact, the instruments used are pretty much the same as those in the tracks before, but the percussion helps support the rest of the piece with any contextual worries it might have otherwise experienced — the harp is played in its traditional way and it and the vibraphone succeed in providing the perfect calm background to the piano and strings, which ultimately help the melody progress. Overall, it sounds more substantial than the three tracks before it, and consequently is the most satisfying track on a generally unsatisfactory taster session.

In the end, this 'special disc' seems quite unworthy, even of the final soundtrack, which was not one of the stronger 'Tales' scores anyway. Sakuraba has merely furthered the idea that his work for these games usually lacks innovation and is a very mediocre enterprise. The title music is as bland (but admittedly appropriate) as ever, the gloomier tracks are never really that gloomy, and, at the end of the day, each track presented is not very musically sophisticated, which is a general rule of the 'Tales' soundtracks as a whole. The tracks lack depth, and it sounds very much like Sakuraba and Tamura were purely trying to create the kind of simple but effective tunes that Nobuo Uematsu and Yasunori Mitsuda had down to an art back in the time of the SNES and bad audio quality. Is the CD likely to become even a single person's favourite? Probably not. In fact, you would have to be a serious Tales music connoisseur to even listen to it the whole way through more than once.

Personally, I think the Tales of Symphonia Special Disc is a good example of the kind of music that is in abundance on the final four-disc soundtrack itself. It is pleasant, to a certain degree, but run-of-the-mill work all the same. Is it worth buying? Let's just say, if you see one of the few copies selling on eBay, do yourself a favour and buy the four disc set instead — at least that way you will be able to experience some good tracks, as there are a few to be found. Not only that, but you will save money; all four of these tracks are on the final soundtrack and sound exactly the same. I would say that it is what it was originally intended, ultimately; a throwaway sample or a collector's item, but nothing you will want to listen to twice.

Included with the Japanese version.
Album was composed by Мотой Сакураба / Синдзи Тамура and was released on August 29, 2003. Soundtrack consists of 4 tracks tracks with duration over about 5 minutes. Album was released by Namco.