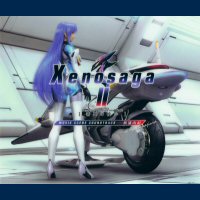 One of the biggest, if not the biggest, disappointments for most people in the transition from Xenosaga Episode I to Xenosaga Episode II was the loss of Yasunori Mitsuda as the composer. Yes, it is sad that he had to go, but Yuki Kajiura was easily the best candidate for a replacement, and she proves her worth in this soundtrack. Whether or not it is better than the soundtrack for the first game is highly subjective, but it is impossible to deny that she did a very good job here.

As for the overall style, it's mostly electronic and upbeat, but there are some symphonic tracks in there too. Kajiura uses a lot of chanting and singing on this soundtrack. In fact, over half the pieces use a human voice at some point. Usually the vocals aren't the main focus though. Most of the lyrics are nonsense and don't mean anything anyway. This could turn a lot of people off, but I think the way it's done actually adds to the music, rather than destroying it.

Just taking a quick scan through the track list, I noticed that Albedo and Nephilim both have themes on the soundtrack, as they did in the first game. Taking a listen to "Albedo," I noticed that it was quite a bit different than the original piece in the first game. It features male vocal chanting, which is really its only notable feature. Now if you've ever heard the piece from the first game, you'd know how good it did setting off that creepy/insane feeling that the character is known for. This piece doesn't do it as well, and I was disappointed. Albedo's second track, "Strained #2 Albedo #2," is actually a bit more noteworthy, if only for one small portion. Kajiura takes her original Albedo theme, and imposes it on an electronic feel, chanting at all. It really does make a pretty neat effect.

"Nephilim" also deserves mentioning as well. This is basically another version of the piece of Nephilim from the first game. This is a pure vocal track, but with no lyrics. It's just a layering of voices using the melody from the original piece, and in the end, it creates that eerie, mysterious feeling much better than Mitsuda's original version. It's actually one of my favorite pieces on the soundtrack for that reason. It's too bad that Kajiura couldn't give "Albedo" the same treatment as the piece of Nephilim, but then again, I honestly don't see how Mitsuda's version of "Albedo" could get any better...

Other than those pieces, the rest of the soundtrack is completely original. The first notable feature is the vocals, as I mentioned earlier. Most often, chanting is used. There are some chants that pop up fairly often, like the one in the "Fatal Fight" tracks. While it does get a little repetitious, it's not bad enough to become annoying or to take away from the pieces. Also, since the words don't always make sense, the listener is more inclined to listen to the music rather than the words. Then there are vocals without words, which are in the Albedo pieces and "Nephilim". This kind of vocals is good because it doesn't distract the listener with words at all. Then there's the traditional singing, which is most notably heard in "Jr.", "Sakura #2", and "Sweet piece". Only "Sweet piece" is in English, so most English speaking listeners will only be able to understand that one.

"Sweet Song" also deserves mentioning more. Lyrics wise, it's another love piece, which is very typical of an ending theme. Musically, it's a bit more interesting. First off, it's heavily vocal-based, and it combines both singing and chanting together. The lyrics are sung on top, while the chanting is generally in the background. The way they blend together is just amazing. The other noticeable feature is the nice usage of percussion, both in the intro and the background beat. The "Opening Theme" is a pure instrumental version of the same piece, using strings for the melody and the addition of the flute. While it doesn't contain the blending of the vocals, it's still a great piece.

That's not the only place a flute pops up at either. Kajiura uses it on some of the more symphonic tracks, such as "Bitter" and "Xenosaga 2 Opening Theme" and also on some of the electronic tracks, like "A Field of Battle~Bitter #2" and "Here She Comes (KOS-MOS)." In all of the above mentioned pieces, the flute is used to make a beautiful melody, despite the more harsh sounding electronic background in some of them. One notable piece that uses the flute is "Assault". Here, the flute sounds like it's completely separate from the music, creating a chaotic or discordant feel. While it doesn't help make the piece a pleasure to listen to, it does make it quite interesting.

The biggest problem with the soundtrack is the recycling of the same melodies or chants. It's done a lot. But each different piece that uses the same melody or chant is still unique enough to still make it interesting. Even the four Sakura pieces are all interesting despite the recycling. But I suppose it could get old quite easily for some people.

While a lot of the things I've mentioned may turn people off, such as the large usage of vocals and recycling, it's still a good idea to give it a try. If you've like other Kajiura music, you may like it as well. I'd compare it to Noir rather than .hack/SIGN. Granted, I've only heard a few pieces from Noir, but this soundtrack sounds more like them rather than the multitude of .hack/SIGN music I've heard. Even if you're sad to see Mitsuda go, at least give Kajiura a chance.

Album was composed by Юки Кадзиура and was released on July 07, 2004. Soundtrack consists of tracks with duration over more than hour. Album was released by Victor Entertainment.