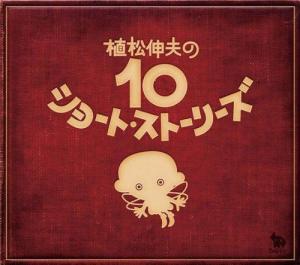 10 Short Stories is Nobuo Uematsu's first solo album since Phantasmagoria and was partly inspired because the composer recently turned 50. While his first solo album was quite mellow and calming in nature, this album features extensive vocal work by CHiCO in a variety of styles, some of which are poignant, while some of which are playful. As a forewarning, if you aren't into Japanese vocal themes, especially those by female singers, you might want to stay clear of this release. Although it's practically impossible to compare the two solo albums, does this one manage to create a great sense of atmosphere too?

There are a few themes, such as "It Begins" and "Recess," that serve as small interludes. Each is mainly piano led with CHiCO on vocals. Nevertheless, the meat of release comes in the form of the namesake of the album, the ten short stories. Opening with "Here Comes Conga Boy," I immediately was reminded of the music in the LocoRoco series. Throughout, you'll hear playful piano and accordion sections with some interesting percussion use (like that wasn't obvious from the title!). There is even a slow ballad section that focuses on strings, harp, and chimes with some beautiful vocal harmonies. This is an extremely upbeat theme that really shows Uematsu having a bunch of fun! The vocal work is playful and varied and really adds to atmosphere of the song.

The next theme, "Gimme Gimme," has a bit of funk to it, with what seems like some bluegrass and honkytonk influences. As I listen to this song, I'm definitely digging the jazzy piano, even if it is quite simple. In addition, the acoustic guitar work and the harmonica adds a nice bluegrass touch. Oh yeah, and you can't forget the cowbell! The vocal work is pretty cool, too, with some nice vocal layering over the main melody. In addition, at the end of the CD, there is the bonus track, "Gimme Gimme (Alternate Version)." It's definitely a bit more minimalist and jazzy in approach. Although the funk of the original is obtained through the use of the guitar, the once upbeat atmosphere of the original is replaced with a more sentimental one through the use of some ethereal chime usage. However, as the theme progresses, it does regain some of its playfulness through the addition of some jazzy keyboard/piano and brass work. It's another great version of the theme and even though this is a bonus, I much prefer this version.

The next song, "Hikkari Pikkari," apparently comes from the upcoming game Fantasy Life that Uematsu-san is scoring. Although it starts off with some melancholy strings work, it becomes an upbeat theme with some fantastic acoustic guitar work and a great sense of rhythm. What I particularly enjoy most about this theme is the various layered instruments, such as some additional strings work and xylophone. In the end, this is a fantastic preview of what to come. I wonder if the rest of Fantasy Life will be just like this. Of course, I think the vocal work is wonderful as well and CHiCO does a great job. "No Worries!" is an interesting song, particularly due to the progression of the theme. The verses of the song are accompanied by a quirky xylophone accompaniment with some ethereal backing and the occasional woodwind. However, when the chorus comes in, it takes on rock approach. Although the melody in the verse isn't the best, it does give it a unique sense compared to the melodically focused songs featured on the rest of the album. The instrumental bridge is rather nice as well since it extends the music heard in the chorus, where the melody is easily the strongest.

My personal favorite, "Whistle a Song," is a very uplifting and happy song featuring some fantastic acoustic guitar work, some whistling, and strings work. The vocal work complements the music beautifully and I think it is one of the strongest vocal performances on the album. Although the progression of the theme is more straightforward and unvaried compared to some of the other songs on the album, I feel that the music more than makes up for it. The layering is exquisite and really brings about a delicate nature to the entire mix. Interestingly enough, the next story, "The Incredible Flying Natsuhiko," is my second favorite theme on the album. Opening with a narration in English that tells the story of two lovers who can only see each other but once a year, it sets up the vocals for the song. During this narration, the music is very ethereal in nature. Once the song properl begins, the music definitely features a very pop vibe. It's still an extremely beautiful theme with some great rhythm, some great choice of instrumentation (the various percussion instruments in particular), and a strong vocal performance.

After some of the more melancholy themes are finished, we are once again returned to some themes with a bit more fun to them. "Coconut Castaway" takes on a more Caribbean flair, with some beautiful acoustic guitar and steel drum work. There is a slower section that focuses on accordion and some interesting percussion usage, giving it a bit of a French flair. The crazy part is that Uematsu even throws in a small bit of vocal distortation. It's quite a beautiful section. The vocals are quite playful and really fit with the overall tone of the theme. "The Chef Who Used His Noodle," to put it simply, is quite beautiful. The music this time transports us to Japan and therefore provides a very strong Asian flair. The strings work here is what absolutely astounds me. At times, it is used as a very lighthearted accompaniment, yet at others, it takes on a more poignant touch. The shakuhachi accents and dulcimer accompaniments really help accentuate this feeling of Asia. The vocal work is also quite fitting for this theme.

Continuing with the ethnic soundscapes, "Every New Morning" is an extremely delicate theme that features an overall Asian/Celtic/Folk atmosphere. It's definitely an interesting combination of styles and I love who the acoustic guitar brings about the folk flavor, the shakuhachi, a primarily Japanese instrument, bring about the Celtic nature at times, but also an Asian flair at others, and the shamisen, of course, adds even more Japanese flavor to the mix. Overall, this is an extremely beautiful theme with some delicate vocal work, a powerful melody, Lastly, "Revenge of the 5-Foot Swhail" is rather action-oriented, a big contrast to the rest of the album. It features some great rock work, some fantastic synth work, and percussion. The vocals seem to have this interesting 'reverb' effect going on that really matches the atmosphere of the piece. Overall, this is a driving theme with some stellar instrumentation choices, a bubbly vocal performance, and that classic Uematsu sound.

Comparing this album to his first solo album is absolutely impossible, given the intents of each album are both different. While I rather enjoyed his first one, many people did not. I suspect those who dislike vocal work will probably not find this album to their liking, but for those who do, or are willing to give it a shot, the music behind each song is extremely creative. When I met Uematsu-san in Chicago, he told me that he considers this music to be more "Uematsu in style" than the stuff he creates for Final Fantasy. I can see why he says that, because the music here really fits his personality, but I'll let you guys be the judge when it comes to your own personal idea of what you consider "Uematsu in style." Regardless, it's worth giving this album a shot. If you aren't sold completely, you can always listen to the samples on the Dog Ear Records website for a small preview and make your decision from there.

The first printing is an enhanced CD that contains promotional videos and an interview with Nobuo Uematsu.

All songs produced and written by Nobuo Uematsu

По материалам 1up.com...
Показать
31.05.2009    1474
Album was composed by Нобуо Уэмацу and was released on March 10, 2010. Soundtrack consists of 14 tracks tracks with duration over more than hour. Album was released by Dog Ear Records.