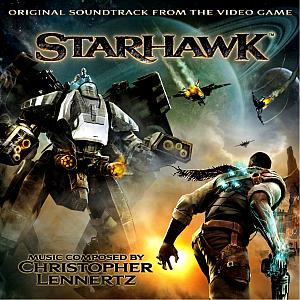 Christopher Lennertz is a name that is popping up more and more in the game music world. My first Lennertz score was Gun and it was breathtaking! At first, I expected it to sound like every other western score out there, but he managed to not only sound different, but refreshing by utilizing smaller ensembles in addition to powerful and sweeping orchestral compositions. His other scores are no less breathtaking as he has made contributions to three entries in the Medal of Honor series. I had found that his portrayal of World War II was often more personal and emotional than Giacchino's offerings. Another of his video game titles, the flight combat game Warhawk, presented sweeping, majestic, orchestra music with memorable melodies depicting heroism. So after listening to this and the composer's other efforts, I expected something unique from its space-based sequel Starhawk. The score was released in both digital editions and, with five extra tracks, in physical editions. The latter is reviewed here.

I was excited about this soundtrack since I first heard the main theme of the game, which in the release is called "Homeworld". Fans of his score to Gun should be in for a treat, for it features guitars and fiddle along with the orchestra. The orchestration is lush and the melody shows that, while the game features a gritty world, it has some grandeur to it. "Work Site Raid" uses the main theme admirably and presents some raw sound, as well as a mixture of instruments and styles. Lennertz said in an interview that he was looking to combine genres as well as instruments to create new sounds that haven't been used before. I can see he succeeded and the idea and effort is welcome. "Homeworld Under Siege" likewise reprises the main theme in a dramatic and epic way. Thanks to the excellent written of the theme and the inspired nature of its arrangement, I find it doesn't get old at all. The chords in this piece are interesting especially at the end of the track.

"Prologue" and "A Tale of Two Brothers" keeps with the western meets Sci-Fi sound. We hear some twanging by the acoustic guitars, fiddle work, as well as some harmonica, electric guitar, and some rumbling drums. It perfectly depicts the dirty world in which the main character Emmett Graves lives. The second title is chilling and haunting, yet full of regret. Like Lennertz's other scores, all the parts are well-produced — combining rich performances from the Skywalker Symphony, under Lennertz's baton, with solos from selected folk and rock artists. "Come and Get it" is another excellent composition. It starts with a steady fiddle part that reminds us of a cowboy running through a creek to find the bandit, but at the same time Lennertz throws in a pan flute giving a jungle sound with the low cello and bass to sustain. The percussion comes in more prominently and the harmonica and orchestra build up to a heroic climax. The last few seconds are just powerful!

While it's clear that Lennertz enjoyed integrating a western influence, some may feel it is too prominent for a space title. Fortunately, there are plenty of tracks that explore other genres. "Abandoned Settlement" sounds like someone is sneaking around in a town in which the enemies have prepared an ambush. It is tense with the percussion booming in at times, or the steady chugging of the electric guitar and the occasional twang of the guitar. I like the use of pan flute in some of these pieces as it adds a unique flavor to them. "Orbital Defense" further ventures away from the western sound. It has Asian influences as well as a Middle-Eastern sound. Here you have the koto, pan flute, booming brass, electric guitar riffs and solos, and fast paced percussion. It even makes great work of synthetic percussion! Well done! "Train Robbery" also sounds Eastern influenced with Taiko drums and the string driven melody. It ups the action in the last part of it and increases the brass presence to create a dramatic build.

Looking at further action-oriented themes, "Into the Fray" is another track that emphasises the hybridised nature of the soundtrack. Its rhythm is so addictive that I want to keep repeating it. It makes me anticipate a fight. The orchestra provides the meat of the piece, but in the background you hear the twang of the guitar. It isn't entirely a western score sound either, as it also has an action suspense feel to it. "Fleet Battle" seamlessly goes from epic orchestra music, to country western, and to action thriller. The frantic strings are used to maximum effect, yet they retain a certain elegance. At 1:20, the guitar takes on the melody and the string rhythms in the back complement perfectly as well as providing a catchy ending. "Rifter Pride" maintains the same feel and style as the rest of the soundtrack, but this certainly isn't a bad thing and features some top-notch orchestration and melody. It almost seems visceral with the punches in the brass and percussion. I also love the sound of the track "The Pipeline — it carries a reserved massive sound and crashes into you in waves of raw energy.

As the soundtrack approaches its climax, listeners are offered "The Crash Site". It is probably one of the very few on this soundtrack that isn't fast paced or tense. Instead it focuses on creating a unique subdued ambience prior to the action tracks that follow. "The Rift" starts off rather creepy and suddenly the guitar comes in followed by percussion, harmonica, and fiddle. I love the anvil hit once the fiddle takes the melody. After that, the orchestra comes in and it reprises the main theme. It is such a great moment musically and gave me chills upon hearing it! "The Outcast" is the theme for Emmett's brother Logan, who is leading a battle against mankind. The theme utilizes some female vocals, heavy brass, jabbing strings, and some light electronic percussion use. It sounds imposing and overbearing, which is good for an antagonist theme. However, the soundtrack ultimately ends with the theme for the main character himself. It is in very much the same style as the rest of the soundtrack and contains some very memorable melodies. The string part at 0:38 is sublime! It is so aggressive and brings this solid score to a close.

The La-La Land release includes five extra tracks — additions make the soundtrack flow better as a more of a complete listening experience. "Fight the Good Fight" starts off reserved yet intimidating, like a predator stalking its prey waiting to make the kill, and pushes forward gradually. This action cue is a little tame compared to some of the others and, although it grooves, it doesn't possess a standout melody. "Defend the Hangar" starts off interesting by offering some blaring horns. The trombone is played like an ancient horn like you would hear from Mordor in Lord of the Rings. It is ponderous, but rightfully so. "The Source" is an ambient track that is ominous and contains some sinister choir melodies. It is surprisingly my favorite of the additions and it provides yet a new sound to the score. "Scrappin' Time" reprises the main theme in the western textures, complete with the fast fiddle and harmonica for good measure. Finally, "Outcast Warrior" features Middle Eastern vocals to start but quickly turns into a tribal sound with the drums and horns. It reprises the same melody heard in the "The Outcast" theme prior to the finale.

I was not surprised to find Starhawk an impressive and well written and orchestrated video game score. It contains a mixture of styles such as orchestral, western, Middle-Eastern, Asian, rock, and electronic, all of which are spectacular composed and implemented. There is really something for everyone, but the ones that will be the most impressed are those who enjoyed Lennertz's scores for Gun and Warhawk. My only qualm with the score is that I found the tracks too short, with most spanning just two minutes — it left me wanting more music, more development. Still, Lennertz did his best with his brief and the brevity did not affect my overall enjoyment. The La-La Land Records release contains five more tracks than the digital release, but it costs $10.00 more. For completionists like myself, the physical release would be more worth your money, but for those on a budget should still find the digital release satisfying.

Album was composed by Кристофер Леннерц and was released on June 19, 2012. Soundtrack consists of 28 tracks tracks with duration over about 60 minutes. Album was released by La-La Land Records. 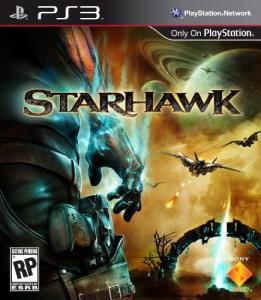