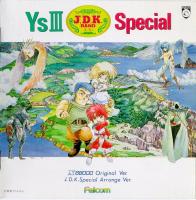 The J.D.K. Specials are among the least worthy items among Falcom's vast discography. They are simply minor resynthings of the original scores rather than true arranged albums, so are generally redundant with the original score releases. This extends to the Ys III J.D.K. Special, which is complete resynthed version of the Ys III score that largely rehashes material from Music from Ys III Wanderers from Ys. Fortunately, this release does have four bonus performances by the J.D.K. Band, but is it enough to make it a worthy purchase?

After a silly opener, the Ys III J.D.K. Special truly begins with "A Premonition = Styx =". This slow cinematic track is almost reminiscent of Ys' "Feena" except considerably more ambient. The resynthing here doesn't necessarily enhance the ethereal nature of the piece, however, since the samples chosen are a little too perky and the tempo is a little fast. This sort of synth works quite well in more upbeat pieces of the series, though, such as the town theme "Trading Village of Redmont" and Adol's theme "The Boy Who Had Wings". These are even more enjoyable than the originals. However, the improvement is far from vast and these interpretations completely lack in comparison to more ambitious arrangements such as those of Ys: The Oath in Felghana.

Of course, there is a major rock component to Ys III's score as well. This is particularly reflected in dungeon themes such as "Be Careful", "A Searing Struggle", and "Varestine Castle" that all offer bold synth melodies and gritty rhythm guitar backing in these versions. There are also decent boss themes, such as "Beasts an Black as Night" and "The Strongest Foe", but even in the resynthed versions they tend to be lost in synth distortion. The differences from the original are negligible in terms of listenability. The complete resynthing concludes with acceptable renditions of the ending themes, the reflective "Departure at Sunrise" and upbeat "Wanderers from Ys". Moving away from the main score, there are six themes exclusively created for the X68000 version of the game, though the only noteworthy ones are the bubbly "The Theme of Chester" and the sentimental "Believe in My Heart".

At the end of the album, there are four special performances by the J.D.K. Band. These are the only arrangements that depart considerably from their originals and are also well-implemented. "Be Careful" is the most exciting of these arrangements since the J.D.K. Band show what thrashing lead and rhythm guitars should really sound like. "Stealing the Will to Fight" and "The Boy Who Had Wings" are considerably tamer, but still upbeat and Ys-spirited. The latter is a little frustrating, however, since it departs a little too much from its funk origins into generic pop. Finally, "Morning of Departure" closes the album wih a male vocal performance against atmospheric pop instrumentals. This one is very cheesy and sentimental, so not all will like it, though it's still quite impressive how the instrumentals are constructed and the vocals are better than expected.

The Ys III J.D.K. Special is far from a bad listen. After all, it features all of Mieko Ishikawa's mostly appealing music from Ys III: Wanderers from Ys, as well as four bonus band performances. However, the release does not have enough to differentiate it from Music from Ys III Wanderers from Ys, since the original tracks are given minor and sometimes detrimental synth upgrades. This isn't a bad thing for those who don't already own that album and want to hear the bonus tracks, but those who want to hear the authentic original versions of the Ys III score should stick to that album and that album only.

Album was composed by Масааки Кавай / Миэко Исикава and was released on March 21, 1990. Soundtrack consists of 36 tracks tracks with duration over more than hour. Album was released by King Records. 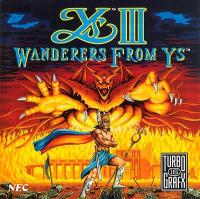