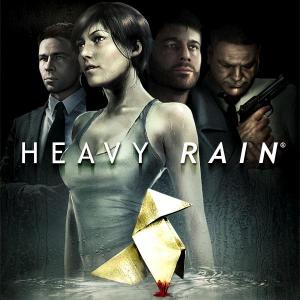 “We are such stuff
As dreams are made on; and our little life
Is rounded with a sleep”.

- William Shakespeare, The Tempest, 4.1
Wet snow is falling outside, and heavy snowflakes are silently dropping on a window glass and flowing down. Leaden clouds as if agreed completely covered the sky and nothing will save me now from feeling full empathy for Heavy Rain heroes. With a shivering hand I insert the disk into playstation so as to declare in 10 hours: “It’s pure art!” For these 10 hours of sitting in front of the screen without a break I’ve been witnessing, perhaps, the most emotional, thrilling and adult story for the video game of all time. Some scenes make your heart cry, from others you feel your heart pounding madly in your chest. A number of moments leave such a depressing impression that the rest of the day you sit in deep contemplation. In other words, the game generates natural emotions not using unfair methods, such as mysticism, science fiction or non-stop hack and slash. This is a great story of how a little life turns into a nightmare. And the reason why it pierces the soul must be in its frightening truthfulness and its closeness to everyone.

Like in any decent detective thriller, music has not the least role in creating a full-fledged emotional game canvas. Writing soundtracks for works sort of Heavy Rain only seems to be easy. In fact, it’s incredibly hard to create dark, juicy, sensual and very-very sad music since the level of composer’s experience must be at least not lower than the one which director sets. Moreover the music should strain the nerves so violently as a scriptwriter does. In case of Heavy Rain, the game raised the bar so high that it required a very cool and consistent composer. Fortunately, Quantic Dream had noticed him already during the work on Fahrenheit. Normand Corbeil, not a young man already, was unfairly left languishing in the shadow of Angelo Badalamenti, while Maestro wrote a music score for Fahrenheit based on a couple of leitmotifs. And now his time has come! All the songs for "Heavy Rain" were written personally by Corbeil without any outside help. What is noticeable, I must say.

In each track you can feel his personal experience, a shade of melancholy and a part of the composer’s soul. In Ethan Mars' Main Theme, which is the leitmotif of the entire soundtrack, a sad flute blends in with a violin solo and ends with a sincere piano part, perfectly conveying the nature of the character. Lauren Winter's Main Theme is an ode to noir cinema of the 40s. It’s a calm orchestral suite, evoking in the listener something similar to a feeling of pleasant reverie. A harp, woven into the wind canvas, seems to be lulling the player in sleep. Scott Shelby got gloomy composition, saturated with asthma and rain. It kinda smells like an old coat and a battered Ford from the 50s. The melody is intentionally stylized to fit the post-war cinematography so as to emphasize the atmosphere, which the fat detective creates. Well, as for Madison Page, her personal track is overflowing with inner grief that constantly breaks out. Maybe because it almost entirely consists exclusively of strings?

Corbeil doesn’t restrict himself when it comes to aleatorics in action tracks, which Garry Schyman has already used before in a fairly similar context. However it’s this music of action that is the weakest part of the album. At times it’s too pretentious and extremely stamped. Though it fits the game perfectly, I must say.


“O wonder!
How many goodly creatures are there here!
How beauteous mankind is! O brave new world
That has such people in't!”

To separate music from the game in this very case is like trying to make your opinion about Ferrari only by its engine not paying attention to a car body. In other words it’s a great stupidity. Cause absolutely all the elements of Heavy Rain are designed to work as perfectly fine Swiss clockwork. We must also add that most of the truly beautiful and outstanding tracks never got into the album. It’s the game music to which everything that is written above applies to a greater extent and not the scanty release by greedy people from Sony. But even not the most interesting songs on this album earn it solid eight points. Pure emotion and genuine empathy – these are the things that make Heavy Rain music just as it is.

Heavy Rain is a very unique game. Some may scoff at describing it as an interactive drama but that is essentially what the game is. Rather than relying on action or getting from point A to point B, Heavy Rain instead decides to focuses the gameplay on the characters and their interactions and emotions, which can take the story in several directions. It's a Game Noir (a video game that's like a Film Noir). There are only two other games I can think of that use a similar approach, Funcom's Dreamfall: The Longest Journey, and Fahrenheit, made by Quantum Dream, who also happen to be the developers behind Heavy Rain.

The music of Heavy Rain reflects the atmospheric approach that the game takes. Rather than an energetic rousing action score, composer Normand Corbeil instead provides a score that mostly consists of slow, tension building, emotionally driven music. The soundtrack consists of main themes for the five main characters, seven action tracks which correspond to the action sequences in the game, and four other tracks which make good use of the character's themes. Overall this makes for a very enjoyable and moving soundtrack, which is a nice change of pace from your typical Western score.

The soundtrack opens with the main theme of Ethan Mars, a theme that has a very uneasy feel to it. It opens with a mellow cor anglais solo that expands into a full tune played by the strings, which is also the main musical motif of the soundtrack. After some ambient string writing the motif then comes back before the music dims down to a piano solo, followed by a quiet, very uneasy string chord to end. Next up we have the main theme of Norman Jayden, which has a similar feel to Ethan's theme, but grows into a more intense, almost threatening piece of music, complete with shimmering strings and loud brass. Both of these things suddenly attack at various points in the piece, interrupting the underlying motif, as if it's designed to shock the listener.

Madison Paige's theme starts of a lot calmer than the other themes in the soundtrack. Though in the middle of the piece it does get more dramatic in the middle. The most interesting of these themes however is the theme of Scott Shelby. It seems to blend the jazz and romantic styles, and just like the character, his theme has a lot of mysterious elements to it. Lauren Winter's theme is then by contrast nice and calm throughout, and in a major key. All of the main characters themes really give you a sense of what that character is like and what they are going through. Even if you've never played the game the music leaves that impression on you. That to me is the sign of an amazing soundtrack.

The four piece that don't have a main character theme or action scene attached to them use" the music of the characters themes to accompany key moments in the story. "Before the Storm uses the music heard in Ethans theme, but uses different instrumentation; this eventually builds up to the climax, providing obviously a very emotional moment in the game. "Painful Memories," probably my favourite piece of the soundtrack, is a piano solo piece that, while short, really left an impression on me. "Last Breath" then develops the ideas first heard in "Painful Memories" to make a more complete piece, with eerie strings in the background.

Then you have the action tracks. These pieces are perhaps the most typical of a Western score, with plenty of loud brass, pulsating percussion, and heavy strings, all of which makes for some very intense music. "The Chase" is appropriately very fast paced, while "The Bulldozer" is heart pounding and heavy. These pieces could probably be longer and the music doesn't really stand out but they get the job done. To be fair, the action takes a back seat in this game so it's understandable if more effort was focused on the character themes and the emotional impact rather than edge of your seat action.

The Heavy Rain soundtrack in my opinion is brilliant, and on its own the music is very moving and really draws you in. It's very delicate and subtle, yet grand and epic at the same time, and like I said, it's a really nice, refreshing change of pace from other recent Western games and soundtracks. The action scenes aren't the greatest tracks, but with this soundtrack that's not the focus; the focus is the characters and the story, and those aspects of the soundtrack are outstanding. Obviously it helps to have played the game but also I think this is a soundtrack that really warrants a stand-alone purchase, to allow you to truly appreciate how good the music really is.