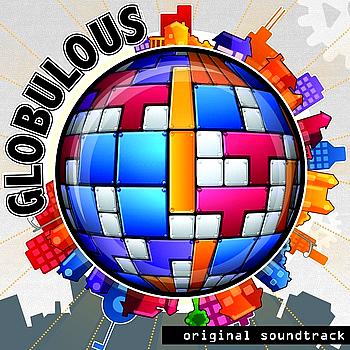 The music to puzzle games is an often overlooked element. Most people either pay little attention to it, or turn off the sound entirely. However, I believe that puzzle game soundtracks add much more to the overall experience. For a type of game genre that instills intellectual cognition among the player, the music must appropriately match this kind of aesthetic. Enter Globulous, composed by Andrew Aversa aka Zircon and Jeff Ball. This somewhat obscure indie block puzzler hit iOS devices in 2012. More than just a Tetris-clone, those that were able to play this sleeper hit would find themselves with many levels of enjoyment. Reviews consistently praised the soundtrack that provided an extra layer of atmosphere in the game. But on its own, how does the music fare?

"Dawn Oblique" is a sleepy track that sets the tone for the rest of the album. Soft piano chords, masterful violin solos, subdued percussion, and ambient synth are the major elements here. Co-composed by Aversa and Ball, it's a wonderful introduction that draws inspiration from both new and retro puzzle games. "Snow Delta" trades in the dreamy overtones for electronica. The percussion is faster-paced, with the melody played on strings and other synth instruments. Another highlight, "Vapor Radian" features a harpsichord melody while floaty synths accompany it. Even when taken outside the game, I found myself absolutely enjoying this piece.

Many of the pieces that Jeff Ball composed are extremely laid-back. For instance, "Cliff Sine" focuses the mind further by utilizing ambient synth with distant mysterious piano bars in the background, while "Cavern Omega" is an extremely laid-back piece that relies on dreamy beats and quiet guitar riffs. In "Glass Lattice" and "Ocean Cuboid" various synth instruments provide the main melodies, while ambience is featured heavily in the background. Though these tracks aren't the most melodic or complex here, they're so beautifully mixed and subtly arranged that they're still enjoyable on their own.

"Oasis Epsilon" combines the previously mentioned styles of ambient and electronica together. Zircon's inspirations from retro puzzle games can be heard here with the synth. Subsequent tracks also pay tribute to older chiptune soundtracks. This is apparent with "Stone Clockwise" which utilizes 8-bit sounds in addition to ambient synth. "Rain Node" is particularly techno-inspired, with plucked string instruments and "woodwind" 8-bit sounds playing their own melodies. Definitely one of the best tracks on the album. Another great highlight is the following track, "Cocoon Attitude." The keyboard work is phenomenal and that same "8-bit woodwind" instrument makes a great reappearance.

Speaking of phenomenal, Jeff Ball returns with another violin solo in "Thicket Prism." Pair that with plucked string instruments and other synth in the background, you've got an excellent puzzle track that's mixed extremely well together. Once of Ball's best, "Obsidian Axiom" is an interesting combination of retro, ambient, and a hint of dubstep. The overall format is a surprising experience that works pretty well. "Aurora Magnitude" starts with the use of 8-bit sound accompanied by an Eastern-flavored stringed instrument, perhaps a mandolin. About half-way through, Jeff Ball returns for one last violin solo. I don't think I need to say it again, but his playing is great. The two composers really work off one another well. The final track "Tidal Glide" echoes the formula set by previous pieces. We end on a mysterious note with more ambient synth, distant clapping beats, and brief piano chords.

Complex, ambient, techno, and retro-inspired. This is how I would describe the soundtrack to Globulous. Even taken out of context from the original puzzle game, I found the music to be varied, stylistic, and all-around enjoyable. Zircon and Jeff Ball are both excellent composers and I look forward to hearing more collaborations from the duo. Unless you have a particular dislike for this kind of music, I recommend the purchase. The album only costs $7 from Bandcamp and is well worth the price. Why not purchase the game on iTunes as well, seeing as it's only $0.99? Puzzle games and their soundtracks have come a long way, and I believe Globulous is a wonderful tribute to their retro roots. Highly recommended.