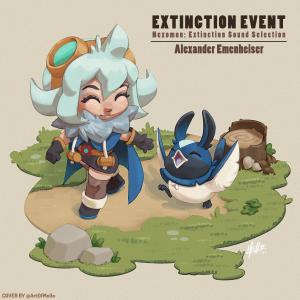 Track 9, "Route 1 from Nexomon—'96 Version", was created on a whim as the artist was experiencing art block and was never intended to be in the game.

Track 12, "BLAM!!", went unused because the artist struggled to create a melody to the developer's liking. He collaborated with Jänson Harris, but Alex did not like the results and it went unused. After the game was released, Alex collaborated with Nexomon: Extinction composer Daniele Coppola and Kaiman Parker, a fan who had created a cover of "Vados' Theme", to finish the song. Neither Daniele nor Kaiman could make a suitable melody, so "BLAM!!" was released as is. Jänson Harris, Daniele Coppola, and Kaiman Parker are credited in the special thanks for their work.

Album was composed by and was released on January 11, 2021. Soundtrack consists of 15 tracks tracks with duration over .