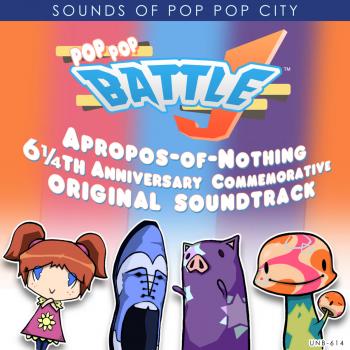 Pop Pop Battle J is an interactive, multiplayer whack-a-character game using a custom controller created by ULTRANIMBUS. The game debuted in the hallways of GDC 2012, was exhibited in IndieCade's Night Games that same year, and was further guerrilla-exhibited at indie game, developer, and art events from 2012-2015. In addition to music and audio, I also co-produced this game.

To celebrate the milestone six-and-a-quarter-year anniversary of the game's non-release, I am proud to offer a completely remastered soundtrack to you today.

This Cardboard Jubilee Edition includes RARE UNRELEASED TRACKS, a chiptune remix of the original gameplay theme, and an ENTIRELY NEW THEME SONG [to a game that has no credits screen].

Album was composed by Tommy Pedrini and was released on June 14, 2018. Soundtrack consists of 9 tracks tracks with duration over about 20 minutes. Album was released by ULTRANIMBUS.