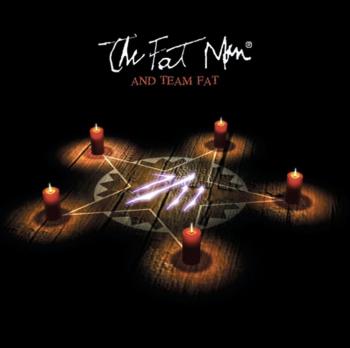 Reprint of 7/11 with two bonus tracks.


All compositions by George Alistair Sanger except "Skeletons in my Closet" by David Sanger.
All compositions are (C)(P) 1997 Big Fat, Inc.
Published by Fat Manor Publishing, BMI.
Mastered by Larry Seyer at Bismeaux Studio
Package art by Brian Moriarty

"Also known as el03.mid, this piece was not intended to go in the game, but nonetheless it shows up in The Eleventh Hour, while the player is working on the Train puzzle. It was actually an early MIDI sketch for the song "The Final Hour," written to establish and test out the new thematic material to be used in the sequel to The 7th Guest. Note the second vers tries out the 7th Guest melody as a countermelody. Note the chorus is different. Note that the instrumental hook in this turned into the "I could be doing stuff" chorus of the final version. Note the long bass-only section (placeholder for a solo), and the long section at the end that leaves plenty of room for fadeout.

Requests for "the train puzzle tune" occasionally reached The Fat Man, but it was only recently that he received a YouTube link to the train puzzle (from a fan: Thanks, Joseph Grabko!), and realized that the tune being requested was not "Hey Conductor" as he had previously supposed. Going back over old files, el03.mid turned up, matched the YouTube video, and here it is for the first time ever in a fresh, clean recording outside the game."