God of War III: Original Soundtrack From The Video Game 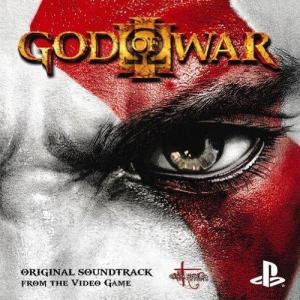 The fifth instalment to the God of War series, God of War III is the final chapter of the current story arc, which follows protagonist Kratos through his brutal journeys and on-off relationships with the Greek gods. The music throughout the series has been consistently strong, and with the same composers featuring on the God of War III Original Soundtrack alongside newcomer Jeff Rona, it was almost preordained that it too would be an epic creation. With music from the inspired Gerard Marino, inventive Jeff Rona, fearsome Ron Fish and Mike Reagan, and melodious Cris Velasco, this soundtrack is easily the best in the series to date. Read on to see what makes it so special.

Just as with the previous soundtracks, Gerard Marino once more contributes the most tracks to this soundtrack. Renowned for his aggressive orchestration and powerful musical style, Marino seems to take things a little further with his contributions here, which feature some fantastic melodies too. The opening theme, "God of War III Overture" is very similar to his "God of War II - Main Titles" on the previous album. With a focus on a chanting choir and the powerful use of strings and brass, "God of War III Overture" is the perfect taster track from Marino. Following an increase in power offered by sustained brass and the emphatic choir, the best section comes in around 2:12 in the form of a gorgeous string announcement which journeys towards the end of the track. The following "Call to Arms" is another gripping piece, making use of a simple 'cello ostinato, warring drums, and a well-scripted collaboration of brass and choir.

Out of all of Marino's themes, there are two which especially stand out to me. The first comes in the form of "Poseidon's Wrath," which is a fast-paced and manic track with a purposeful melody, besieged with enthralling crescendos, resounding drum beats, and other delicious devices. The power and passion that emanates from this track is astounding. The second theme I consider among Marino's best is "Revenge Falling," not to be confused with Reagan's shorter, lesser developed "Revenge Rising." Contrary to "Poseidon's Wrath," the success of "Revenge Falling" can be explained by its peculiar relationship between silence and brash noises. The key points in the track come at around 0:30 where we are greeted with the themes first ambient section, followed by the resultant rise and propagation of its main hard hitting section at 1:00 and melodic section at 2:15. To put it simply, "Revenge Falling" is a musical rollercoaster, and one without any safety rails either.

Mike Reagan's contributions to the soundtrack almost seem pitifully few in comparison to Marino's, with just four new themes featuring on the album. Nonetheless, the themes we do hear from him are still worthy, and are at least of the quality of his co-composers. His first input, "The Forge of Hephaestus" actually starts off as one of the album's more ambient tracks before leading into a resounding roar of instruments around 1:40. With the use of a plucked string instrument, eerie bass motifs and prominent choir, the build-up to the track's impacting section is both creative and mysterious. "The Great Machine" is another alluring track with its threatening drum beat, invigorating high-pitched string motifs, and authoritative militaristic brass parts. It is "In the Face of Fear" though which I find to be Reagan's most compelling track. The bold, aggressive manner stemming from this theme coupled with Reagan's strongest melody results in a powerful musical blend, with the emphasis placed on creating that ever so important ominous aura.

Newcomer, Jeff Rona also has a similarly small contribution to the soundtrack with just three themes. Although it's quite hard to analyse his style especially, it's certainly clear that he has provided some impacting and imaginative additions. "Anthem of the Dead" is much in the same vein as Mike Reagan and Ron Fish's contributions to the God of War Soundtrack. It takes upon the form of a slow paced choral chant with a simple yet chilling four note motif passed amongst strings and brass. "Duel With Hades" is another successful track, and perhaps is a little more resourceful in terms of instrumentation too. Rona toys with us with his brass interjections and high pitched screeching strings to create a stunning, menacing soundscape. Despite God of War III being his first video game work, it's clear the White Squall composer still knows how to depict action-packed scenes. "Lure of a Goddess" though, is by far his most inspiring and unique composition, using ethnic instrumentation to create some fascinating imagery. The melody is this track's strong point, and it almost seems to guide itself, weaving in and out of Rona's sturdy accompaniment. Overall, a fantastic transition to the game industry from one of Hans Zimmer's greatest graduates.

Ron Fish, who has already established himself on earlier soundtracks, seems to dabble with both ambient and power-driven themes. In regard to the more ambient tracks, "The Lost Souls" is probably the best of them. With sustained notes throughout the orchestra, a very slow pace, and seemingly random development, it's a scene-setting track if anything, though not necessarily gripping. The more brutal themes he has created turn out to be his best once again. "Depths of Hades" is one of the album's more frightening tracks with plenty of sections featuring enticing crescendos and heavily accentuated drums. Notably, the section at 1:27 is absolutely terrifying, with the fast pace adopted and aggressive way in which the instruments are used. "The March of Tartarus" is my favourite of Fish's tracks on this album. The way the track is introduced with a grand rising sequence, and how it is then paired with some lavish string and brass development, is truly captivating in and out of context. The best section of the track comes towards the end at 1:19, whereby all of the parts seem to come together in a glorious blend of melody and scintillating percussive accompaniment.

Lastly, with some nice melodic contributions to the soundtrack, Cris Velasco's pieces are amongst the album's more enjoyable themes. His first theme, "Stalker," is an accomplished and vigorous track with a rich string melody and typical brass outbursts. "The Muse's Song" is just as enjoyable too, and it actually succeeds in the absence of any brass interjections or continuation of a rampant drum line. The 'cello melody (later brought onto the violin section) is extremely powerful and the bass development is very well executed. Another two of Velasco's tracks which are worth a mention are "Brothers of Blood" and "Pandora's Song." "Brothers of Blood" is akin to Fish and Marino's tracks in terms of power and aggression, but still upholds his own melodic prowess. While it features some fantastic sections, it's nowhere near as impacting as "Pandora's Song," which is arguably the album's best track. The success of this track is the result of the carefully crafted coming together of all instruments involved in the main melody. The melody becomes amplified, and this allows Velasco to integrate a magical solo vocal line, whilst also creating a sumptuous harmony. Out of all the contributions on the album, I'm actually the most fond of Velasco's.

As expected, the God of War III Original Soundtrack is an orchestral success, and is certainly the best score in the series to date. With each composer providing consistently powerful tracks, strong melodies, and hard-hitting backdrops, it's hard to find a flaw in the album at all. Considering the origins of the music for this series, it is interesting to note that it has actually come a long way, despite not really changing so much in style. It's clear that each composer has realised their strengths by this stage, and so they have successfully created themes in which they focus their strengths. Much like with the earlier soundtracks for this series, the God of War III Original Soundtrack is one which you'll find a pleasant addition to your collection.