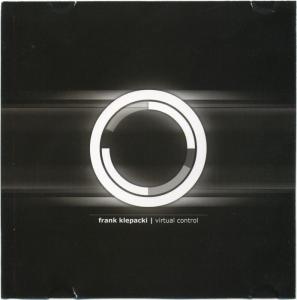 Frank Klepacki followed up his first-rate Rocktronic straight away the year after with his third solo album Virtual Control, released in 2005. According to notes Klepacki wrote on Virtual Control, the album was partly inspired by the night club scene in Klepacki's home town of Las Vegas, and by the rise of hip hop as part of club dance music, which Klepacki observed during his stints as a freelancing drummer in Las Vegas cover bands.

Looking at Klepacki's musical career, it's not surprising that Virtual Control follows a different path than its predecessor Rocktronic, although they share one fundamental similarity: both are colourful explorations of one particular style of music, trying to tease more and more variations, twists and turns out of the same musical foundation, often by mixing in other genres. On Rocktronic, that foundation was industrial rock, while on Virtual Control, Klepacki dabbles in club music. Funk, house and hip hop elements have been part of his video game scores for years – reaching back all the way to the first Command & Conquer – so Virtual Control's flirt with dance beats doesn't mark a completely new phase in Klepacki's oeuvre. Still, the album's clubby nature sets Virtual Control further apart from Klepacki's Command & Conquer scores than his previous solo albums Morphscape and Rocktronic managed.

Take “Cigar Bar”, an effortlessly cool track that convincingly mixes a relaxed lounge atmosphere with funk guitars and just the write amount of beats to keep it danceable. Klepacki splices in some synth-driven interludes, lined with buzzing, warm bass tones and vinyl scratches. It's a track that wouldn't have fitted on any of Klepacki's game scores, and it's impressive to see how confidently he delves into new musical terrain while maintaining his trademark eclecticism that is still evident in a relatively minimalist composition like this. Klepacki's exploration of club culture turns more luscious on “Smack Dat”, which brings back the funk with a bigger focus on guitars than “Cigar Bar”, and some delightfully 70s retro synth leads. Powering it all is a heavy, distorted bass that's steely and energetic enough to effectively balance the laid-back nature of the synth leads. Klepacki singled “Smack Dat” out as one of his personal favourites on Virtual Control and it's hard to argue with that – “Smack Dat” is one of the album's most grooving and charismatic tracks. “Frank K Is Back” is one of Virtual Control's throwbacks to his first solo album Morphscape, in particular to “Gonna Rock Yo Body”. Counting Midnight Star, Debbie Deb and Afrika Bambaataa amongst his influences, Klepacki returns the vocoderised vocals and Kraftwerk-inspired early 80s synth beats of “Gonna Rock Yo Body”, but gives the track a more full-bodied treatment and a catchier melody lead. In a way, “Frank K Is Back” feels like an expansion upon “Gonna Rock Yo Body”, but the track's denser arrangement robs it of some of the fascination that “Gonna Rock Yo Body”'s slick minimalism exuded. Ultimately though, that's only a minor quibble and “Frank K Is Back” is another strong variation of Virtual Control's club formula.

Virtual Control's other obvious reference to Morphscape and that album's languid title track is... well, “Virtual Control”, another venture into 90s rave territory, a free-flowing, constantly developing techno track with a more pressing beat than “Morphscape” that keeps it from meandering as much as that earlier composition. But while it's undeniably fun to follow “Virtual Control”'s constant flow of new, yet consistent ideas, the track still feels a bit out of place on an album filled with more succinct, harder-hitting cues. “Vegas In-Crowd” is a more organic part of the album, but is also Virtual Control's least interesting cue – a relatively short, standard club track whose generic if competent nature might be part of plan, given that Klepacki wrote the track to poke “a bit of fun at the club scene which became so predictable.” There's little on “Vegas In-Crowd” that suggests parody and or any other distancing device though, and the track feels more like imitation than dissection.

More convincing are “Retrophonic” and “Gar”. The first cue is one of Virtual Control's most interesting genre cross overs: dark electronica that verges on the industrial at times is mixed with a retro synth groove and a stomping, head-nodding rhythm underneath that gives the music an unexpected pop edge, which contrasts well with “Retrophonic”'s harsher edges. The same goes for the atmospheric synth pads that mingle with the grooving beats and give “Retrophonic” still more personality as a track that mixes pop and grittiness with ease. “Gar” started out as an experiment when Klepacki sampled the bassline from 80s arcade action game Rygar for a remix, and then decided to write a new track that would play in the spirit of that remix. The result is Virtual Control's most varied dance track that leads the listener through an array of different techno rhythms, highlighted by synth accents and layers that keep piling up. It's a better techno track than Rocktronic's “It Has Begun”, and it's surprising segue into hip-hop rhythms in the last third by simply slowing down the tempo is elegant while keeping the composition danceable. “Gar” is yet another track that shows Klepacki's venturing into relatively uncharted musical waters (within the context of his body of work), but preserves his trademark eclecticism and care for seamlessly flowing, well-developed tracks.

Bookmarking this core of dance-oriented tracks are a handful of cues on which Klepacki's introduces his hard rock and metal influences. Virtual Control shifts from its rocking beginning into club music and back with the ease listeners have come to expect from Klepacki's albums, and “He Lives” certainly opens the album with a focused blast of energy. Based on an audio sketch Klepacki had created for Command & Conquer 3 as the franchise's bold villain's song before developer Westwood was shut down, “He Lives” is another hard rocker that combines crunchy, effective riffing with pumping and marching industrial rhythms. It's nothing new for score collectors familiar with Klepacki's Command & Conquer soundtracks, but once more, the formula is executed to satisfyingly high standards – in other words, “He Lives” rocks more than hard enough. Closing track “Vengeance Beast” raises the bar further and earns its name, starting as a mid-tempo metal track with a familiar militaristic undertone. Things turn ferocious when “Vengeance Beast” segues into a trashy passage driven by furious double bass drumming that turns the track into the most aggressive cue Klepacki had yet penned. Pulling off the same manoeuvre as “Gar”, “Vengeance Beast” heads towards the finishing line by slowing down the tempo, which in this case results in a blistering, chugging metal groove that recalls 80s-era Metallica. Among these intense rockers, “Dominate” falls a bit short. It switches back and forth between a hip-hop groove coupled with enigmatic synth lines and bits, and straightforward hard rock interludes that are among Klepacki's less inspired creations in that genre. The riffage and drum rhythms now feel too familiar and the track never really takes off, mainly because its shift between different musical styles and the resulting stop-start dynamic becomes predictable.

True to his eclectic musical trajectory, Klepacki shifts focus again after the fierce Rocktronic and goes clubbing on most of Virtual Control. As on Rocktronic, focusing on one genre doesn't mean that there's not an impressive amount of variety to be found on the album, as Klepacki finds a new approach for each of his beat-driven tracks, throwing funk, pop, hip-hop and retro influences into the mix and almost always ending up with a winner on his hands. The hard rock/metal tracks that open and close the album offer not much that's new to fans of Klepacki's previous works, but with a power house as impressively roaring as “Vengeance Beast”, that's hardly an issue. Virtual Control is a more refreshingly original album than Morphscape and Rocktronic, despite the occasional throwback to the electronic elements on Morphscape. What Virtual Control lacks is Rocktronic's consistency – there's a handful of tracks here feel competent rather than inspired. Despite this shortcoming, Virtual Control continues Klepacki's run of strong solo albums and shows his commitment to musical reinvention.

Album was composed by Фрэнк Клепаки and was released on 2005. Soundtrack consists of 10 tracks tracks with duration over about 40 minutes. Album was released by BMI.