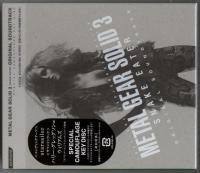 The score to Metal Gear Solid 3: Snake Eater develops what was introduced on the 'Metal Gear meets Hollywood' score to Metal Gear Solid 2: Sons of Liberty. Cinematic composer Harry Gregson-Williams returns to produce music mostly for the cutscenes of the games and uses the score to experiment and develop his compositional range. Symphonic jazz musician Norihiko Hibino both complements Gregson-Williams and helps to define the 1960s setting of the game. The result is a stronger effort than its predecessor with respect to both the compositions themselves and their presentation in a soundtrack release.

With the opening vocal theme "Snake Eater", composer Norihiko Hibino offers a James Bond parody that establishes the 1960s setting of the game. Vocalist Cynthia Harrell's velvety soul-influenced interpretation combines with chromatic chord progressions, sleazy horn punctuations, and even some backing singing. The theme knows that it stinks of cheese and uses that to its advantage. The result is a fitting, memorable, and full of character, ranking as one of the best video game vocal pieces ever created. Harry Gregson-Williams sets the highbrow standard of the game's more serious music with a new interpretation of the Metal Gear Solid main theme. While less direct and accessible than Metal Gear Solid 2: Sons of Liberty's orchestronica fest, the theme is far more multifaceted and wholesome overall. Developing over 6:32 to encompass a variety of fluidly integrated sections, the slow ethereal introduction gives way to a action-packed brass-punctuated section loosely based on original theme's melody. After a sudden chromatic progression cuts the section short, Gregson-Williams introduces an ambient original section featuring his signature boundless strings against electronic beats. By 3:20, the theme has intensified once more to enter an aggressive beat-heavy section, where fragments of the main theme are again heard. Following another ambient interlude, the main theme is finally used in its purest form at 5:09 on acoustic guitar leading to an epic coda reminiscent of its predecessor. Though the variation takes some time to get used to, it is the most definitive arrangement of the main theme to date.

Gregson-Williams takes the leading role in the first half of the soundtrack and shows he has matured since Sons of Liberty. "Virtuous Mission" is the cinematic masterwork used to accompany the title sequence; initially setting the scene of a plane carrying Snake over Russian soil with beats and strings, it rapidly intensifies from the 2:00 mark to achieve an amazing climax as the protagonist makes the first Halo jump. The portrayal of the villain in the Morricone-influenced "Ocelot Youth ~ Confrontation" is spot-on, while the revelation of the ultimate tank in "Shagohod" is well-prepared by a tense militaristic buildup. "CQC" offers a raw percussive interpretation of Close Quarter Combat with a pulsating mixture of industrial beats, tribal rhythms, and shakuhachi accents. Also of note is "KGBVSGRU", which surprises with a complex, unpredictable, and abrupt fest of electronic polyrhythms and distorted rock, and the two-tiered "Across the Border ~ Snake Meets the Boss" with its splendid integrations of the main theme. Some dark ambient tracks like "Mission Briefing", "Cobras in the Jungle", and "Fortress Sneaking" lack the highlight features to be especially entertaining on a stand-alone basis despite fitting the espionage nature of the game extremely well. Nevertheless, they don't suffer the saminess and triteness of Sons of Liberty's lesser creations and still have some amazing moments once they've developed, in part due to their excellent technical implementation. When intersynched with Hibino's tracks and Gregson-Williams' more accessible creations, the soundtrack doesn't feel laboured upon familiarity, always full of energy, tension, and dynamism.

Benefiting from a two disc release, Norihiko Hibino deservedly makes a far more prominent appearance in this soundtrack in contrast to Sons of Liberty's official album. "On the Ground ~ Battle in the Jungle" is a fantastic debut, starting off as a subtle ambient theme and cinematically transitioning into a stunningly developed battle theme with an iconic electric guitar solo at 3:00. The Cobra boss themes mostly blend pressing rhythms, bold orchestration, and dabs of exotic percussion and woodwind to create music full of dynamism and uncertainty; despite having continuous elements, each is individually characterised to fit their very specific scenarios well with "The Fear" and "The Fury" being particular highlights. Moving on to the second disc, Gregson-Williams makes crucial appearances with the rhythmically continuous "Sidecar" action compositions, the haunting "Virtuous Mission" arrangement "The Sorrow ~ Everlasting Fight", and the electro-nationalistic blend "Troops in Gathering". However, Hibino is boss. Daunting and uncompassionate, "Volgin, The Torturer" is built around a well-articulated steady beat that resembles the sound of approaching footsteps, while the "Clash With Evil Personified" provides an electrifying mixture of overdriven guitar beats, orchestral discords, and... didgeridoo utters. "Escape Through the Woods" is one of his finest compositions, establishing a fluid blend of jazz, ambient, ethnic, and electronic components before culminating with an epic reprise of the "Battle in the Jungle" theme. Finally, "Last Showdown" amalgamates many of the stylistic and elements elements Hibino previously, but is also fascinatingly understated, focusing on the personalities rather than the action.

The end of the soundtrack is just as captivating as the introduction. With "Don't Be Afraid", Rika Muranaka crafts a lounge jazz song that outshines "Can't Say Goodbye to Yesterday". Elisa Fiorillo carries the song with a passionate and captivating vocal performance while the instrumentals are mostly functional, the piano part being most prominent. Though the trumpet solo section isn't particularly well crafted, it adds a new dimension to the theme leading to a more ab lib performance from Fiorillo in the last 90 seconds. The result is a derivative but pleasant theme that fits the romantic scene it is used in and, of course, the 60s setting of the game. "Eva's Reminiscence" is an introspective piano-based piece that entrances with its minimalistic craftings and ethereal overdubbed sound effects. It transitions fluidly into Gregson-Williams' final item "Debriefing", a 7:21 composition that accompanies the unexpected, powerful, and tragic conclusion of the game. Largely a melancholic arrangement of the main theme, the soft harmonisation of the brass cues depicts a bittersweet end to the mission. By focusing on the emotions it evokes as opposed to the forgivably rather derivative orchestration it employs, one might just be reduced to tears. The icing on the cake is the contemplative acoustic song "Way to Fall" used for the end credits; though actually sampled from the British indie band Starsailor's 2001 album Love Is Here, one could easily be fooled that it was an original production given how well it fits with the events that preceded it. Alas, that is not it.

Under pseudonyms like 66 Boys, Starry.K, and Chunk Raspberry, Hibino created eight so-called healing tracks in various 60s styles. They range from surf guitar music like "Surfing Guitar" and "Rock Me Baby" to lounge jazz in the soothing "Sailor" and "Pillow Talk". "Jumpin' Johnny" and "Salty Catfish" are goofy upbeat pieces reminiscent of Johnny B. Goode, intended to convince people to get up and boogie. Probably the most memorable is "Old Metal Gear", which convincingly reworks the Metal Gear Solid main theme into a light dated surf tune. Hibino captures their stylistic features perfectly with just the right instrumentation and appropriate instrumental solos. In the game, these pieces are very atmospheric and fit their contexts so well, ensuring masses of nostalgia when listening to the soundtrack. I think it was the right decision to place them as bonus tracks at the end of each disc of the soundtrack as they're completely different in style to the rest of the music featured here and would have undermined the overall maturity of the soundtrack experience if integrated more fluidly. The theme of "Snake vs. Monkey" is included at the very end of the soundtrack; it features tense rhythm-driven music reminiscent of Hibino's battle themes but is more linearly developed and slightly less intense given it is used in a silly mini-game.

The Metal Gear Solid 3: Snake Eater soundtrack is largely stylistically continuous with Metal Gear Solid 2: Sons of Liberty's. However, the quality tends to be higher with respect to musical creativity and the refinement of cinematic underscoring. This is largely since Harry Gregson-Williams makes a more of an effort here to produce diverse and well-developed themes after samey dark ambient themes for its predecessor. His contributions range from clearcut masterpieces like multifaceted main theme arrangement, "Virtuous Mission", "Ocelot Youth", and the epic "Debriefing" to more controversial creations like "KGBVSGRU" and the Sidecar themes that are easily appreciable in context. Norihiko Hibino, the underlooked musical star of the franchise, makes the greatest contribution and receives plenty of exposure in this official soundtrack unlike its incomplete predecessor. He wonderfully defines the 60s feel of the game with "Snake Eater" and the healing tracks while also offering great action themes and cutscene pieces. Together, Hibino and Gregson-Williams are a formidable team that contribute to Metal Gear Solid 3: Snake Eater being one of the most fitting and refined cinematically inclined video game scores to date.

Sounds like Classical, Electronica, Jazz - that's what we can say about this album. 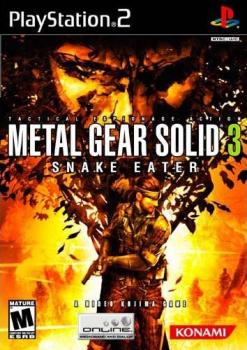