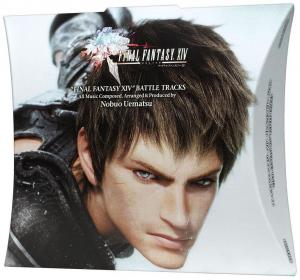 In September 2010, Square Enix at last continued Final Fantasy's online saga with an all-new title Final Fantasy XIV. For the first time in ten years, Nobuo Uematsu returned as the sole composer, taking the series' music back to its routes. In addition to some headlining instrumental and vocal epics, he created a wide range of acoustic field themes and rocking battle themes for the title, in collaboration with arranger and synthesizer operator Tsutomu Narita. Eager to milk their franchises, Square Enix released two albums to celebrate the release of Final Fantasy XIV, each featuring a handful of tracks. The Final Fantasy XIV Battle Tracks features the two series' arrangements and seven battle themes from the game.

Like its counterpart, the Final Fantasy XIV Battle Tracks opens with an arrangement of a series' classic: the Final Fantasy main theme. While Tsutomu Narita's arrangement aspires to a rich orchestral sound, it doesn't quite parallel Shiro Hamaguchi's treatments; with its bombastic brass, fake strings, and superficial snares, it clearly lacks polish in terms of both orchestration and implementation. Still, it does seem like a fitting return to the series' musical routes, both expressive yet humble. The album's closer, an arrangement of the victory fanfare, also features this overblown synthetic orchestral sound. But between the charming melody and the nostalgic treatment, its deficiencies again are tolerable.

Between these book-ends, the rest of the Final Fantasy XIV Battle Tracks focuses on a style that has always been close to Nobuo Uematsu's heart: rock music. Following the wholly orchestral approach of Final Fantasy XI, it was a major decision to incorporate rock elements into this MMORPG, but it was always probably an easy one to make. After all, The Black Mages and Mistwalker's RPGs both show the positive popular reception to Uematsu's rock music. The major battle theme "Beneath Bloodied Banners" instantly demonstrates the functional effect of Uematsu's rock music; it both enpowers listeners with compelling rhythms and synth parts, while capturing the suspense and danger of battle with gritty rhythm guitar riffs and dissonant orchestral interjections.

Of all the battle themes on the album, "Nail of the Heavens" is probably the most anthemic. Similar to his Blue Dragon battle themes, Uematsu immediately grabs the gamer's attention with punchy synth motifs, before taking listeners on a journey with the catchy electric guitar lead. It's certainly quite cheesy and retro — not to mention quite similar to what Uematsu has created before — but such features won't detract from its pleasurability. Though the track is much more upbeat than "Beneath Bloodied Banners", there are plenty of turbulent interludes. A particularly impressive feature is the gothic chorus work heard in the background at critical points in the theme. It's makes the track all the more dramatic during the game's encounters.

Of all the tracks on the soundtrack, "Quicksand" is the most unsettling. As the title implies, it creates a great sense of desperation with its fast-paced rhythm parts and obsessively repeating synth lead. It has a little in common with the series' infamous hurry tracks, but is set apart with its more enjoyable timbres and much vaster development. "In the Shadow of the Colossus" and "The Forest's Pulse" are also quite threatening with their furious bass leads. But like Uematsu's great boss themes on Final Fantasy VII and Final Fantasy VIII, eventually wild synth leads prevail and offer exciting hooks to come back to. Although a little too similar to each other, some of these battle themes certainly rival the classics from the PlayStation era and that is no mean feat.

"Desert Moon Defied" is more inspired by progressive rock, such as Uematsu's favourites Dream Theater. The steel-stringed guitar plays a rhythmically jagged riff throughout the piece and creates thick cross-rhythms with the rhythm guitar and drum kit. Following the introduction, the piece becomes dominated by a dense 70s-inspired synth lead that adds to the intensity and abstract feel of the encounter. However, even this track eventually builds into an elating climax featuring lyrical interplay of the synth parts, showing that Uematsu is always routing for the players not the enemy.

It's excellent to see Nobuo Uematsu returning to his rock routes on Final Fantasy XIV Battle Tracks. The tracks are all fairly similar in their approach — which is not helped by their side-by-side presentation — but they are still suited to their in-game contexts and both memorable and exciting on a stand-alone level. What is less impressive is the corporate strategy of releasing two incomplete commercial promotional albums prior to an announcement of an official soundtrack. Consumers would be much better waiting for the larger and richer full soundtrack release, perhaps coinciding with the PlayStation 3 version of the game. It has the potential to be another excellent Final Fantasy score from Nobuo Uematsu. 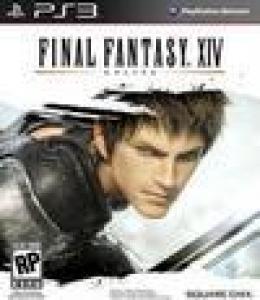 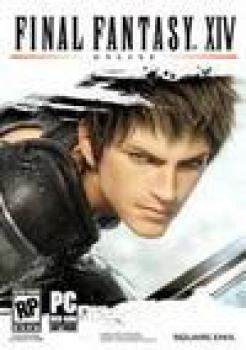