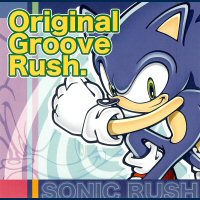 First released in 2005, Sonic Rush featured a new composer named Hideki Naganuma, who is rather well known for his superlative pieces from the Jet Set Radio series from Sega. I remember wanting to play this game back in the day solely to hear the latest from Mr. Naganuma. He contributes the sheer majority of the compositions, though Teruhiko Nakagawa assists them and there are guest contributions by members of Sonic Team and Wavemaster. Given the game was a return to platforming, comparisons with the classic Sonic the Hedgehog themes are inevitable. In my opinion at least, the score is extremely solid and probably the best Sonic score since Sonic the Hedgehog 3.

Given the soundtrack comes from Hideki Naganuma, a lot of the tracks definitely have a Jet Set feel to them. Themes such as "Right There, Ride On" and "Back to Back" both have the crazy energy and beat focus of the best tracks in that series; they are so catchy and fun that you can't help but hum along with them. "Ethno Circus" meanwhile is just fun to listen and demonstrates Naganuma's audacity once more; it has a unique sound with a blendof scat-singing and trip-hopping. It's a totally silly but very listenable song. "Vela Nova" meanwhile is another stand vocal track among many, but really goes well with the stage featured.

My favorite track is probably "Wrapped in Black" because it is an unexpectedly dramatic piece. If not for the lyrics, you would think it was composed by Uematsu or Mitsuda. I also like "Bomber Barbara" a whole lot. It is a very repetitive track vocally, but is fun to listen to with a great beat and a sense of experimentation that Naganuma is known for. As a boss battle, it has the required menace and feeling of danger. Combining dancing energy with such menace makes for one fun track to listen to.

When it comes to my least favorite track, it would have to be "Ska Cha Cha". Like a few of the Jet Set stinkers, it is too damn repetitive to be any fun to listen and is also rather uncreative if that is possible from Naganuma. And it is not repetitive in a good way, like "The Concept of Love" from Jet Set Radio Future. "What You Need" does little to stand out as well; it is the placeholder track that is find to listen to while playing the game, but easily skippable when listening to the score. In this sense, it is kind of like some of the non-Super Brothers Guitar Vader tracks.

A bunch of the tracks have remixes, but they barely sound like remixes. This is done mostly due to the game having two playable characters. I much would have preferred different music for each character, as they are quite different personality wise. It can be said that a lot of the music seems tuned to fit Sonic's attitude and the same can't be said of the second character Blaze's remixes.

Overall, the Sonic Rush score makes Sonic musically interesting once more. It also proves that the DS is very capable of good music, something that the Game Boy Advance mostly fell short in due to its sound quality. I look forward to further Sonic handheld releases and here's hoping Naganuma is on board.

Album was composed by Хидэки Наганума / Teruhiko Nakagawa and was released on November 23, 2005. Soundtrack consists of tracks with duration over more than hour. Album was released by SEGA Corporation.