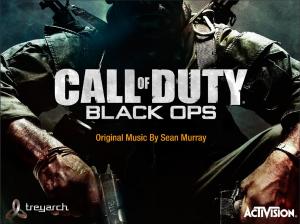 In spite of huge amount of awards, innumerable times of beaten records and enormous influence on video game industry, Call of Duty series had almost never been distinguished by music. We’ve remembered about CoD now only because of soundtrack of distant (now) first part and its add-on, which was composed by Oscar-gifted Michael Giacchino. The situation began changing when a new full-worth part (but not stub named Call of Duty 3) was developed not by fathers of serial (Infinity Ward) but hacks (Treyarch). While gameplay part of World at War was very close but little lower than usual serial level, on the other hand musical canvas underwent serious changes. Melancholic orchestra of Graeme Revell and Zimmer-like creation of Harry Gregson-Williams were replaced by choral blended with aggressive electronic. Sean Murray gave to World at War distinctive mixture of trailer music and expensive Hollywood hereby he unwittingly helped for lot of moments of rather moderate game. In case of Black Ops we didn’t doubt. There was only one question – would he keep the quality on high level?


In the darkness all colors are the same
(Francis Bacon)

The role of music in Black Ops on the one hand is increased, on the other one – became more complex. If in WaW Murray shamelessly was a soloist, in BO he had found himself sing backup. Developers brought players a lot of action-moments and memorable script scenes, so that change of sound setting seems natural. Point is the author avoided the temptation of sampling and making another The Rock.

From the very beginning it’s clearly audible different house Murrey’s features – flirting with atmospheric ambient and stylization to epoch. Moreover, someone had studied music of cranberry movies of 80th (remembering Poledouris it was pretty nice), and then the soundtrack naturally breaths by atmosphere of cold war. Tension, betrayal, lies, undercover operations – all of this reproduced in almost every composition. Special points sound takes for full live orchestra in quantities. Due to this Orchestrations gain volume and that true old-school sound.

Soundtrack is divided for convenience into pure orchestra and the orchestra with sizeable pieces of electronics. And these parts sound rather brightly; they don’t create a sense of the cacophonic music or just mess, and quite organically supplement each other. Sometimes seems Murray has written accompaniment to the new part of MGS, and then just randomly wrong door. For example In Mac-V we hear a powerful orchestra, small inserts of ethnic and competently inlaid in tune elements of the viscous electronics. And so is with any track. Random noises such as shouting, sound of stuck record or thunder make hot to sound, which are typical mostly for industrial and very fresh used in orchestral melodies.

That’s pleasant, unlike his colleagues Sean found time to listen to the musical roots of the series, namely Call of Duty for Giacchino authorship. Other explanations of the appearance of tracks such as Pegasus simply don’t work, because everything (except ethnics) sounds painfully familiar and incendiary.

Melodies that convey the atmosphere are earned to be specially mentioned. Dwarka perfectly combines a sense of malice, the spirit of political thriller and the feeling of something distant, alien. The composer does not alter his love for the strings. Blackbird powerfully pumps suspense constantly roaring violins, a melody as if rushing forward, like a self-titled aircraft.

Treyarch is not Treyarch without the chorale. Its part is much smaller than in WaW, but in general it is woven into a musical panel very carefully and without outright pathos kinks. Moreover, there was a place even for the keynote from WaW, which is neatly ties together ideologically and by the plot with the saga Call of Duty from Treyarch.

No claims to a technical point of view. Orchestra has recorded perfectly, combining is made without a hitch, and every spy who is forced to be satisfied with wheezing microphone will envy to the final quality of the lapping orchestra and electronics.

Of course, the music of Black Ops is far from genius or originality. Moreover, it is unlikely to linger on the memory or become a frequent participant somebody's playlists. Nevertheless, the soundtrack has done the impossible. First of all, it’s hardly the first Call of Duty since the first and fifth parts, which is perfectly a sound separately. And secondly - the music did not remain in the shadow of its protégé, that, according to in-game heat, just an outstanding achievement.

Succeeding Modern Warfare 2 as the fastest-selling game of all time, Call of Duty: Black Ops followed the story of Alex Mason as he goes deep into enemy territories on deniable operations. Following his work on Call of Duty: World at War, veteran television composer Sean Murray reunited with developer Treyarch to score the game. The composer offers probably the series' most ambitious score to date, with his creative musical approaches and top-notch production values, after the more typical cinematic approach of Call of Duty: Modern Warfare 2. Finally aware of the marketing potential of the series' music, Activision published the score digitally soon after the release of the game.

Right from the introductory cue, Sean Murray declares that listeners can expect anything and everything from the music of Call of Duty: Black Ops. "Eagle Claw Pt. I" creates an incredibly dense soundscape with its dark electronic beats, booming strings and percussion, and dissonant brass interjections. In a marked shift from Remote Control Productions' approach, Murray doesn't attempt to glamourise war with a contrived dramatic arch or personal brass melody. Instead he portrays war as something intense, raw, and overwhelming throughout — something that can end even more abruptly than it began. This approach to scoring will be refreshing for many tired of Zimmer's conventions, though it will unwelcome for those who enjoy the typical approach and are alienated by heavy dissonance.

Murray ensures the majority of the soundtrack is dominated by intense fast-paced themes. Fusing modern scoring approaches with avant-garde influences, "Pegasus" is as petrifying as the Dead Space series with its giant textures and uncompassionate dissonance. "Blackbird" and "Virus" are some of the most affecting pieces of tense underscore in a video game, thanks to their momentous string riffs and unrelenting development, while "Panthers" offers a more ominous mood with its slowly evolving ambient soundscapes. "Commies" takes things a step further with its gigantic orchestration and bizarre, semi-operatic chorus use; there's just the right blend of anthemic brass melodies and aleatoric experiments to ensure this track is appealing on multiple levels. "Pentagon" is also a hard-hitting portrayal with its fusion of militaristic orchestration with contemporary elements.

A fascinating aspect of the soundtrack is how Sean Murray fuses a range of elements so convincingly. One of the introductory tracks, "Mac-V" manages to be quite enticing due to its blend of dissonant orchestration with retro electronic beats. The resultant fusion packs quite a rhythmic punch and is sufficiently well-mixed that it still fits the game. On the other hand, the ambient soundscapes of "Resurrection" are pierced with electric guitar riffs, like many tracks on Call of Duty: World at War. In addition to representing lurking aggressors, the instrument certainly lifts the track above bogstandard ambience and gives the track some mainstream pulling power. Once again, Murray's composition and mixing are so tight that the fusion manages to stand out without disrupting the overall musical experience.

There are transient moments of relief on the soundtrack. Tracks such as "Hard Target" with its calm soaring strings or "The Wall" with its elegaic cello solo inspire particularly deep emotions. However, even these manage to deceive listeners with their sudden developments thereafter. These dramatic shifts provide an incredible support for the game's storyline, while also giving stand-alone listeners a more personal perspective on the feelings of war. Another track that undergoes a fascinating evolution is "Beheaded", which manages to be ambient yet action-packed, subtle yet action-packed at the same time. Other more programmatic tracks, such as the multi-tiered "Invictus" or brief "Crash", are somewhat alienating when detached from the in-game scenery, but have an amazing effect in the game.

Some of the most interesting moments on the soundtrack are the more abstract ones. For example, "Dwarka" reflects expectations of another world with its Middle Eastern instrumentation and guitar reverb effects, while "Delirious" and "Anvil (Remix)" have a psychologically intrusive effect with their bizarre instrumentation and electronic distortion. Saving his darkest contribution to the end, Murray ensures "Bendz" is particularly intrusive and horrifying with its shrieking violins and prepared instrumentation. For the climax, "Rooftops" is another hybrid of all sorts of forces — atmospheric orchestral texturings, thrusting guitar riffs, motivating electronic beats, and wailing ethnic soprano — that captures both the outward scene and the psychology of the player. After this wondrousness, "Epilogue" closes the soundtrack in a stereotypical way with a brief and relieving chamber performance.

Sean Murray did an impressive thing by taking the score for Call of Duty: Black Ops in a novel and personal direction. While mainstream opinion is divided, it's so refreshing to find so many experimental musical approaches on this album after the typical cinematic fare of Call of Duty: Modern Warfare. The themes for Call of Duty: Black Ops aren't as prominent as its predecessor, but those present are generally emotional and memorable, while the production values are even higher with the combination of full orchestra performances and high-tech samplers and mixers. Dark, brutal, and tragic, the overall soundtrack is a fitting depiction of war, and what's more the stand-alone digital soundtrack is largely an enthralling and satisfying two hour listen too.

The future is Black

Ознакомиться с рецензией....
Показать
17.11.2010    1684
Album was composed by Шон Мюррей and was released on November 09, 2010. Soundtrack consists of 30 tracks tracks with duration over more than hour. Album was released by Activision.

Sounds like Classical, Electronica - that's what we can say about this album. Notice, Yandex.Music gives you opportunity to freely listen to this album. Absolutely legal. Without violations.