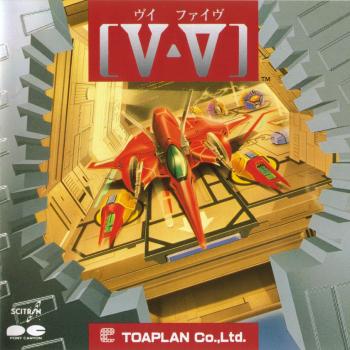 Batsugun was Toaplan's final shooter before they went bankrupt and it started a wave of manic shooters, popularised later by Cave. Composed by Yoshitatsu Sakai in 1993, the soundtrack features a variety of stage and boss themes, all with varying success rates.

"Heart Beat" is an upbeat and cheerful chiptune, particularly in the A section, before it progresses into a slightly darker tone in the B section. Both sections feature some very memorable melodies and the rhythm helps give off a slight industrial, yet poppy feel overall. The corresponding boss theme, "Dark Echo," features a dark atmosphere with some slick rhythms and accompaniments. It definitely portrays a sense of menace, although at times, there are some melodic sections that give off a sense of hope.

The second stage theme, "Skim the Surface of the Sea," although upbeat, still manages to give off that aquatic vibe, in part. It has a great rock vibe overall, with the percussion lending itself quite well in providing a motivating force for the track. The melody itself is successful and reminds me in many ways of some of the lighter soundscapes present on the Mega Man 7 soundtrack. The stage 2 boss theme, "King Bird," features a very menacing, industrial soundspace with its fast past tempo and slick bass grooves and percussion. The melody line, when present, gives off a very futuristic and heroic sound.

The third stage theme, "Bomber Dance," is an intense chiptune focusing on industrial and rock tones, particularly in the various synthesizer accompaniments and bass line rhythms. The melody itself has a very progressive rock tone with plenty of keyboard passages. For the third boss, "Psycho Paranoia" fails to really capture any attention. The rhythms are nice and contrast nicely with melody line, but neither really do much, given its short length.

The fourth stage theme, "Complimentary Ticket," is an upbeat theme that gives off a sense of flying with its airy and wispy melody. It's fairly catchy, although the short B section really manages to grab the most attention with its energetic tone. The fourth boss theme, "Premonition," offers a sinister tone overall, thanks to the menacing bass line; however, the melody line, featuring bell tone sounding synths, makes for a strange combination that doesn't always work, in my opinion.

Lastly, "Geo Frontia" offers a very somber tone compared to the rest of the stage themes. It's a nice contrast though, as it definitely gives off a sense of uncertainty of the future. At the same time, the heroic flourishes are quite pleasant. It's definitely one of the more successful tunes on the soundtrack as it develops well. The final boss theme, "Final Attack" offers a surprisingly heroic and cheerful tone, given it's the final boss theme. However, I do like the progressive rock nature of the track and despite its short length, manages to be quite entertaining and fulfilling.

Batsugun is one of the highlights of Toaplan's shooting legacy and its soundtrack was part of its charm. While the soundtrack is a little short and inconsistent, fans of classic shooter soundtracks should track it down, either through this release or the Toaplan Shooting Chronicle.

Grind Stormer (aka V-V) was a futuristic shooter released in 1993. Composed by Masahiro Yuge, its soundtrack is one of the most esteemed of Toaplan's discography. It was initially released as a stand-alone album by Pony Canyon and later compiled in the Toaplan Shooting Chronicle.

Starting with the first stage theme, "Wonderful Dreamer" is an upbeat and cheerful chiptune with some nice melodic development. It gives off the feeling of flying as well as a dreamy soundscape. It doesn't provide much of a catchy melody though, compared to other stage one themes, but it does provide a fulfilling experience overall. The boss theme, "Night Bird," offers quite a funky rhythm and some sinister tones. It features a mix of more industrial synthesizer tones in the accompaniment, as well as some slick synthesizer solos in the melody line that would work well with a nice keyboard set up or an electric guitar.

"Heads Up" offers some intricate rhythms and some very progressive rock style melodies. It has a very dark tone with a very chaotic melody line at times, offering what sounds more like improvisation on occasion, while at the same time, offering some slightly worldly influence during its duration. "Large Charge" is another track with some slick rhythms. While the melody line isn't the greatest at times, it does manage to provide quite a variety of tones, from more industrial ones to more cheerful ones. The keyboard solo sections, though, are definitely the highlight of the track. "Free At Last" also features a very upbeat melody that contrasts with a lot of the soundtrack. While it does mirror the atmosphere heard in "Wonderful Dreamer," I think it does a better job of grabbing the listener's attention with its stronger melody and overall accompaniment.

"Pepercussion," perhaps a misspelling or typo of Repercussion, offers some industrial tones, but overall, I find the melody to be a bit lacking and the accompaniment to be a bit basic compared to a lot of the soundtrack. Lastly, "A Poisonous Snake" features a dark atmosphere with some pretty groovy rhythms. While the melody isn't always the forefront, I think it offers some great passages when featured with its progressive rock nature. Following the brief ending themes, the release closes with a sound effects collection.

All in all, a solid soundtrack for one of Toaplan's best games. However, keep in mind that the album is no longer commercially available and most listeners would be best checking out the Toaplan Shooting Chronicle instead.

This album is dedicated to one of Toaplan's lower-profile releases, 1992's Dogyuun!!, composed by Tatsuya Uemura. It features the original arcade tracks and a bonus arrange version.

"Dogyuun Magic" offers an upbeat mood with an Asian influence. Uemura offers some intricate rhythms, though it's the overall progressive rock nature of the track that really manages to capture the attention of this listener. Uemura to provide a synth melody that works well with the groovy accompaniment. For the album release, he also created a special arrangement that greatly elaborates on these stylistic origins. It's a treat for Toaplan fans.

"Power On" offers some great rhythms and a pretty decent melody at the same time. There is a definite celebratory tone in the track, but at the same time, I love the mellow passages that contrast nicely with the more invigorating aspects of the track. "High Speed Queen" offers an interesting combination of upbeat melodies with some slower tempo sections that help give it a bit of mystery. Overall, it's quite an intriguing track with some great rhythms and a serviceable melody as well.

As the name suggests, "Onmoroid Boogie" has a very funky atmosphere with a bit of progressive rock flair. The B section offers quite a fun synthesizer melody that really works well at capturing a lot of energy. Lastly, "Gamushalism" has a very industrial soundscape to it, thanks to the mechanical rhythms and futuristic accompaniments. The actual melody itself is a bit more mysterious sounding, but still adopts a sort of a progressive rock tone; however, I feel it's one of the weaker themes on the soundtrack.

"Theme of Boss" develops quite nicely, given the genre. It has a sinister tone, but at the same time, it offers some amazing rhythms and a pretty catchy melody as well. It's definitely one of the more successful boss themes on the album. The release closes with a sound effects collection.

Dogyuun!! isn't one of Toaplan's most high-profile releases, but it is a solid one. The soundtrack is one of the company's most musically and technologically limited releases, and the arranged version testifies to Uemura's talent. But like most albums in Pony Canyon's series, it is brief and available elsewhere in a more worthwhile compilation.

Part of Scitron's G.S.M. 1500 Series.
Album was composed by Масахиро Югэ and was released on May 21, 1993. Soundtrack consists of 13 tracks tracks with duration over about 35 minutes. Album was released by Pony Canyon.