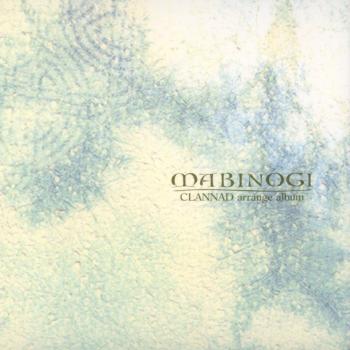 Following the precedent set by Kanon and Air, Key packaged an arranged album in the limited edition version of their visual novel Clannad. Entitled Clannad Arrange Album -Mabinogi-, the arrangements were uniquely inspired by Celtic music and folklore. All the tracks were arranged by Hideki Higuchi, an established bishoujo composer known for his work on White Lips and Popotan.

Higuchi demonstrates his competence as an acoustic arranger with the opening track, "Through the Curtain of Cherry Blossoms". The first half of the piece builds on the bittersweet melody of "To the Same Heights" with emotional piano and string passages. From the 1:54 mark, the arrangement develops into an unique ethereal soundscape — where transient passages for bagpipe, tuba, and clarinet are suspended in mid-air above some minimalistic yet mesmerising motifs. It provides an unique perspective on the still recognisable original and, what's more, an excellent way to set the scene for this Celtic-themed concept arranged album.

The more playful and lyrical "Country Lane" sounds better than ever in its folksy arrangement here, with standout performances for whistle and guitar. There is enough timbral variety during the six minute playtime to portray a colourful scene and offer an entertaining listen. Among the most outward pieces, "A Sunflower-Colored Dress Fluttering in the Wind" is reminiscent of Vaughan-Williams — a heroic folk march with some surprising interludes. Thereafter "A Little Song Passed on from Mother to Child" further reflects Higuchi's talent for classical phrasing with subtle but intimate passagework for violin and piano. From the perspective of both arrangement and performance, both are very convincingly put together.

The first half of "Reborn in a New Life" offers perhaps the most special moment of the album: an extended rendition of fan favourite "Distant Years" in the style of a renaissance chorale. It certainly transforms the original into something more mature and emphasises the spiritual aura of the release. "In a Cradle Overflowing with Light" is the most cinematic entry here, evolving from an exotic chant-based opening into a bright folksy depiction of a town scene. While the metamorphosis is remarkable, perhaps more impressive are the intricate touches that add colour and mood to the piece. The release closes with a hidden track, the full length version of the opening theme "Mag Mell". It's certainly a worthwhile bonus for those who bought the game, dying to here this peppy but dreamy pop song over again.

In contrast to Key's earlier bundled albums, Clannad Arrange Album -Mabinogi- is a reimagining of Clannad's music in the form of a folksy concept album. Many of the tracks deviate considerably from the often contemporary originals and there is a strong emphasis on pastoral and ethereal elements throughout. This approach may be incompatible with the tastes of those that enjoy the conventional sounds of Clannad's main soundtrack. But those prepared to embrace something a little different will find this album both fascinating and satisfying. Hideki Higuchi clearly put a lot of work into making this album as inspiring as possible.

All tracks Arranged by:
Hideki Higuechi

Included with the limited edition of the PC game CLANNAD.

Track 9 "Mag Mell" is not listed in the booklet.
Album was composed by eufonius / Дзюн Маэда / Магомэ Тогоси / Синдзи Орито and was released on April 28, 2004. Soundtrack consists of 9 tracks tracks with duration over about 45 minutes. Album was released by Key Sounds Label.