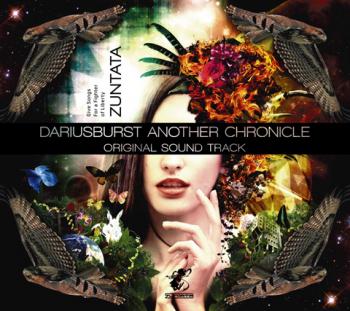 The Darius Burst -Another Chronicle- Original Soundtrack features music composed by Shohei Tsuchiya and Hirokazu Koshio and performed by Remi for the arcade follow-up to the original game on the Playstation Portable. In addition to the original soundtrack, which is done in a very unique format for a shmup game, there is also a bonus track featured at the end of the disc which features a version of one of the themes during a live event. How does this soundtrack compare to the original Dariusburst Original Soundtrack and to the other games in the series?

The most unique thing about this entry in the series is how the first six tunes on the soundtrack seamlessly flow together, providing a suite emphasizing modern and futuristic tones, compared with most classically oriented suites featured in other works. Featuring Remi on vocals, providing an operatic style, the Photoconductivity Suite takes us on a journey that resembles Hisayoshi Ogura"s more vocal-focused and avant-garde soundtracks in the Darius series, namely Darius Gaiden and G-Darius.

The opening of the soundtrack is the first part of the suite, entitled "Suite Photoconductivity ~First Tune: Iron Fossil~," which opens up with exotic vocal work by Remi to steady percussion, given a very hypnotic atmosphere. As the theme progresses, ethereal synthesizer tones are added to the mix and a more industrial sound is thrown into the mix. What I like most about the first portion of the suite is all the minute detail that Tsuchiya adds in the accompaniment, ranging from heavenly harp glisses to choral support. It's an excellent way to start off the suite and provides a foreboding, but beautiful, soundscape. The second part of the suite, "Suite Photoconductivity ~Second Tune: Mist~" features evocative vocals against ambient, calming synthesizer tones. While it doesn't develop much, the combination of vocals and atmosphere realy create a beautiful soundscape that serves as a nice transition between the more action oriented "Iron Fossil" and "Bolt and Sword" sections of the suite.

The third portion of the suite, entitled "Suite Photoconductivity ~Third Tune: Bolt and Sword~ ," features a bit of a jazzy/drum and bass rhythm, ethereal vocals, and some electronic accompaniment that gives off a feeling of frenetic. As the theme progresses, heavier percussion and bass guitar is thrown into the mix before an increase in tempo is heard, marking the climax of the theme. The drum 'n' bass rhythm dominates this section with some organ and rock accompaniments given a bit of a sinister atmosphere. Remi's vocals also manage to accentuate this soundscape. On occasion, some orchestral tones are added with no supporting rhythm, serving as a short, peaceful bridge between the more frenetic sections. As the theme comes to a close, it features more of a lounge accompaniment combined with the drum n' bass rhythm and vocals before transitioning to "Suite Photoconductivity ~Fourth Tune: Haze~," which features evocative vocals against an ambient, almost wind-like background. It gives off the impression that you are lost in a void somewhere and like the "Mist" section of the suite, serves as a nice transition between the more action oriented portions of the suite.

The final action oriented section of the suite, "Suite Photoconductivity ~Fifth Tune: Tyrant~," opens up with some industrial influence with some distorted guitar work in a very slow tempo, creating an atmosphere that gives off a feeling of emptiness. When the vocals come into the mix, there is some improvisation bass guitar work that has a bit of an exotic sound. This first portion of the suite is very different from the rest of the suites, as it builds an atmosphere that seems to blend more peaceful, orderly themes (the vocals) with more chaotic motifs (the bass guitar). As the theme picks up, it adds a very sinister tone through distorted synthesizer, choral accents, a higher-pitched main vocal line, and some fast paced percussion with a tone of industrial atmosphere and an extremely keen detail to background accompaniment, ranging from electronic tones and chaotic noise, to exotic soundscapes produced by frenetic guitar. It's a very intriguing theme and the varied atmospheres really make for a theme that provides a sense of adrenaline at just the right times. The last portion of the suite, "Suite Photoconductivity ~Sixth Tune: Guidance~," opens with a slow music box melody that sounds as if it's being played by a phonograph before moving into an ethereal section featuring exquisite vocals, and a bit of a more inspirational sound. It's a very calm way to close the suite portion of the soundtrack.

"Chronograph," by Hirokazu Koshio, takes the vocal melody heard in the first portion of the suite and transforms it into an ethereal electronic soundscape featuring quite a bit of futuristic sound effects with subtle hints to Remi's vocals. In addition, the rhythm featured features some interesting percussion work, featuring some more standard accompaniment and some faster, more energetic percussion. Koshio's second contribution is "Abyssal Dependence." This theme features a pounding beat accompaniment and a very chaotic soundscape. The majority of the melody line, when present, focuses on distorted synthesizer and ominous bell tones. Throw in a very chaotic, noisy accompaniment with some nice bass guitar work and a heavy industrial influence throughout the piece, and it turns into a sinister soundscape.

The soundtrack ends with two arrangements by Shohei Tsuchiya. The fisrt, "Sybalion Arrange GOLD," originally composed for Syvalion by Yasuhisa Watanabe and remixed by Shohei Tsuchiya, features an electro-orchestral sound with some energetic drum n' bass percussion. It's a short theme, and most likely featured in a bonus portion of the game. The album closes with "KOHDO Floor Version," which is a live version of the first portion of the suite performed at the Video Game Music Live Extend event held in January 2011 and features a very jazzy/R&B soundscape, particularly with the percussion work.

In my opinion, I think that the Darius Burst -Another Chronicle- Original Soundtrack is a more successful offering than the original Darius Burst soundtrack. The suite idea was a very novel approach to a shmup game and the alternate atmospheres between the various sections of the suite create a nice dynamic soundscape, while the vocal focus of the suite is reminiscent of Darius Gaiden's main theme, "VISIONNERZ." The themes from Hirokazu Koshio are also reminiscent of classic Darius themes, especially the dark "Abyssal Dependence." I think that this soundtrack captured the atmosphere of the earlier, more experimental Darius soundtracks and is definitely worth checking out.

*Track 11 performed at the event Video Game Music Live EXTEND
Album was composed by Хирокадзу Косио / Сёхэй Цутия / Ясухиса Ватанабе and was released on June 22, 2011. Soundtrack consists of 11 tracks tracks with duration over about 40 minutes. Album was released by Zuntata Records.