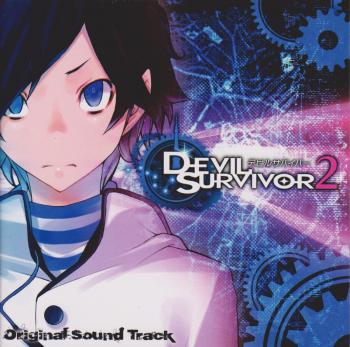 In 2011, Atlus released a sequel to the critically acclaimed Shin Megami Tensei: Devil Survivor for the DS. Shortly after the title was announced, it was revealed that prolific musician Kenji Ito would create the score for the game. In fact, he didn't compose alone and a bunch of Atlus' internal musicians refined and supplemented the soundtrack before the game was released. The resultant soundtrack had plenty of potential, but unfortunately falls somewhat short of the series' excellent reputation.

The soundtrack opens with the anime-flavoured theme song "World of Illusions", written by Kenji Ito and performed by Kinuco Saga. The song once again affirms that Ito is a solid J-Pop composer, able to blend lyrical melodies with exciting rock-pop instrumentals. The vocalist could be stronger, but the strong melody and rich arrangement ensures this track is a highlight. Frontier Works unfortunately only included the short version of this song on the soundtrack release, leaving many consumers feeling cheated. At least the soundtrack eventually receives two full-length instrumental arrangements at the end of the soundtrack. "Memories of the Firmament" is an upbeat rock remix featuring one of the soundtrack's standout electric guitar performances, whereas "Beyond the Firmament" is a simple but heartfelt solo piano performance by Ito himself.

The ambient compositions on Devil Survivor 2 are closer to Atlus' distinctive sound than Kenji Ito's. For example, "Exploration" is full of the groovy bass riffs and deep synth sounds characteristic of the sound Shoji Meguro developed for the Megami Tensei series. Ito's string flourishes are only a subsidiary part of this composition. His organ-driven gothic sound is more apparent in "Devil Fusion.exe", but Atlus' deep electronic pulsations ensure the final track isn't an inferior imitation of his past work. Those that are more sparingly arranged tend to retread the territory of Ito's most uninspiring works, for example Lux-Pain or Okami Kakushi. It is entirely clear that "Dark Clouds" and "Requiem" were never intended to be more than scene-setting filler, while The enticing timbres of "The Enigma Deepens" soon bore when the composition develops nowhere.

The primary highlights of the soundtrack are the action tracks. An excellent rock-orchestral battle theme, "Challenge to the Fate" is as memorable and exuberant as Kenji Ito's best on the SaGa series. In fact, the piercing keyboard solos here are reminiscent of the battle arrangements on Romancing SaGa: Minstrel Song. "Confrontation" and "Battle of the Brave" also channel that retro RPG sound to enjoyable effect; these tracks are hardly original, but add quite a bit of personality to the game nevertheless. Whereas Ito's additions to "Desperate Situation" and "Septentrion" retread similar ground, Atlus' sound team adapted them to sound closer to the series' established style. The former eventually explodes into a series of distorted and frenzied metal solos reminiscent of Devil Survivor, whereas the electronic-ambient backdrop of "Septentrion" is closer in style to Persona.

Atlus' internal sound team composed a large proportion of the soundtrack as well, though their contributions generally disappoint. Ranging from thrashing rock themes like "Attack" and "Shudder", to the moody electronic ambience of "Crumbling Routine" and "The Depessed One", to the upbeat pop flavourings in "A Moment of Rest" and "Special Auction", these tracks all have two things in common. One, they stereotypes rather than fully fledged personalities. Two, they are too brief to make any impact on the score, given their use primarily in the game's cutscenes. The only more welcome additions are "In the Devastated Town" and "Dawn", two acoustic compositions that bring some much-needed depth to the soundtrack. Perhaps if the Atlus sound team spent more time asserting their own personality here, rather than polishing up Ito's own contributions, they could have created a few more highlights.

The soundtrack to Devil Survivor 2 seems to another example of a worrying trend in the games industry: a high-profile composer is recruited to a soundtrack for publicity reasons, they produce a generic and unmemorable contribution, and it's left to the co-composers to make the soundtrack good enough for publication. Kenji Ito had the opportunity to produce a unique and interesting score in his discography here, but instead seem to simply take some rocking battle themes and brief ambient tracks from his stock library. The Atlus sound team only partly rescue the soundtrack and never quite dare to express their own characters. There are jewels here, but must be seeker out in a sea of generic filler.