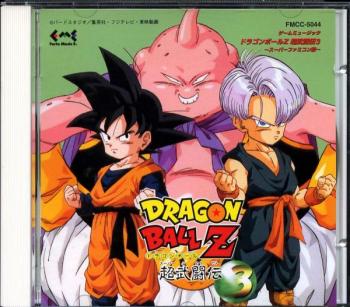 Following the successful but slightly controversial formula of its predecessor, Dragon Ball Z: Super Butouden 3 is yet another arranged album in the Butouden game franchise, featuring classical music and other eccentric styles. Composed and arranged by Kenji Yamamoto, the games' musical identity kept on expanding and enriching with each consecutive installment, while keeping at the same time the unique Dragon Ball feel. More specifically, Dragon Ball's music is characterized by the original mix of ethnic motifs of mostly Asian and Middle-Eastern influences that fuse to create an unique soundscape that fits Dragon Ball's magical and vast world full of multi-cultural elements inspired from real life. Musically, this allows for an eccentric and special aural experience. While exceptionally retaining the aforementioned "Dragon Ball sound" from the animated series into the second Butouden album, with Super Butouden 3 Yamamoto marginally surpassed and expanded upon that style, keeping the influence from the anime soundtracks to please fans while making things fresh and game-ish to attract new audiences.

This album establishes some of the best character-defining themes in the entire Butouden series, or even in anything related to Dragon Ball for that matter. Many tracks are medleys of various themes and sometimes represent more than one character or event. The third track "Grandchild Goten ~ Trunks ~ Boys' Section Final Match" it's a perfect example of this. It's a catchy and upbeat theme with a youthful and hopeful vibe that characterizes the little Saiyan warriors. The intro is particularly impressive, starting with a quiet bass line in conjunction with some beautiful and mellow guitar notes. Later the track becomes fast and upbeat, blasting with quirky synthpad melodies, fast piano chords and some really cool guitar work. Overall, it's catchy and fun, but also subtly bittersweet. It's a nice contrast of musical elements that represent the childish nature of Goten and Trunks and at the same time the great destiny that lies ahead of them.

Even more prominently, Goku's and Vegeta's themes not only are the highlights of the album, but are also two recurring main themes, with many sections and motifs being used throughout the various arrangements. Goku's theme is characterized by fast and swiping strings, heroic horn motifs, catchy surf-guitar rhythms, and various synth sounds that have the unique DB sound of ethnic and futuristic elements mixed in. It's fun, hopeful, dramatic, heroic, and awe-inspiring without trying to be overly epic. It's like if Superman's theme was more youthful, colorful and, well, Japanese. On the other hand, Vegeta's theme is the polar opposite, fitting for the arrogant and anti-heroic personality of the Prince of the Saiyans. Starting with a slow but thundering bass line that is tremendously reminiscent of Brad Fiedel's Terminator theme, it later is followed by various percussive and synth elements in conjunction with some sorrowful string motifs and the aforementioned bass line. The theme has an emphasize in rhythm rather than melody, but it's still very memorable, awe-inspiring and heroic in its own way.

What's even cooler is how these two themes are presented and how they confront each other in certain tracks. In "Goku and Vegeta Medley ~ Destiny's Determination" the listener is greeted with the incredible theme of Goku, but sometimes the bass line from Vegeta's theme abruptly interrupts the aural action of the track, resulting more in annoyance rather than anything else. On the other hand, in "Finale ~ Evil Warrior Vegeta Power Up Version" the intense theme of Vegeta is what's mainly heard, but sometimes the heroic brass motifs from Goku's theme jump in and surprisingly fit with the overall flow of the track. Whereas various motifs from both themes are used in some of the orchestral medleys of the album. "Overture ~ You Can Do It!! Tenkaichi Budoukai" is very beautiful and emotionally moving with its great use of orchestral elements. But what's even more impressive is the ever-shifting mood of this medley and how captivating it is to the imagination of the listener. Starting with a beautiful, aristocratic and almost ethereal theme played by a string ensemble, Vegeta's theme is later reprised and gives to the track a much more dramatic and militaristic edge, and later the track calms down and graciously flows into Goku's hopeful motifs and the previously introduced theme, resulting in a truly wonderful aural experience.

Another impressive, pseudo-orchestral track is "Opening Theme III ~ Tenkaichi Budoukai Meeting of Upheaval" which has a glorious, almost anthemic brass intro, fitting for the opening of a great tournament event. The track is a balanced mix of synth elements and horn melodies along with some truly impressive electric guitar solos. Despite keeping a slow tempo, the track truly pumps up the listener. "Ending Theme III ~ Grandchild Goku Variation" reprises Goku's theme and the theme introduced in the overture that opens the album, resulting into a very relaxing and calm track. Perhaps, "Majin Buu Variation ~ The Evil Magician Appears" would have benefited if it was placed differently into the track list, since it slightly disrupts the flow of the album as it is, but in the end it can be forgiven since the wicked and aristocratic melodies played by the harpsichord are truly a delight. The arrangement takes a much more avant-garde approach, similarly to Gohan's theme in SP2, and here Yamamoto achieved some truly interesting results with his versatility in classical music.

While Future Trunks' theme is a big improvement over the previous version, "Young Trunks' Theme Variation ~ Super Warrior from the Future" still doesn't satisfy as much as the rest of the album. The composition is strong and slightly melancholic, but the instrumentation leaves a little to be desired, as the overly used airy synth can get on your nerves. Nevertheless, the track is good and still features some memorable sections. On the contrary, "The New Z Warrior ~ The True Battle Begins!" could very well be the most original and incredible track of the album. Much like Vegeta's theme, it focuses on rhythm and percussive elements, but here Yamamoto experimented with the sound, resulting into an unconventional but terrific track, much like Cell's theme from the predecessor. Fusing ethnic motifs with thunderous beats, tribal percussion, fast piano chords, electric guitars, and various synth elements, the arrangement totally assaults the listener with its incredible and unusual soundscape that inspires scenes of intense but strategic action. Perhaps, the most beautiful aspect of this arrangement is the prominent use of the saxophone and classical guitar in certain sections that truly leave a big impact upon first listening. The saxophone solos are exquisite while the guitar parts are fast and retain the ethnic feel. Ultimately, the track is a total blast to listen, and despite its slightly dated sound, it will fascinate even modern listeners with its intensity.

Dragon Ball Z: Super Butouden 3 is a fantastic game music album. Featuring a unique mix of musical elements and memorable compositions, Kenji Yamamoto's arrangements are truly a delight to listen. Besides the incoherency of the way the tracks flow due to the styles and unconventional nature of the music, there aren't any major flaws to be found. The music is good, and the central pieces of the album, Goku's and Vegeta's themes, are truly some of the best and most memorable character-based themes that I have ever heard. It's evident that Yamamoto had previously worked on various anime projects prior to this album, including the Dragon Ball Z animated feature Broly: The Legendary Super Saiyan. He brought the influence and well-earned skills from those projects, ultimately creating an entertaining, cinematic and rich musical experience, but very unconventional and divisive due to its nature. The album is not perfect, but if you love good game music regardless of genre or style, you owe to yourself to listen to this album, whether you are into Dragon Ball or not.

This is an arrange album of music from the SFC fighting game.
Album was composed by Кэндзи Ямамото and was released on October 21, 1994. Soundtrack consists of 10 tracks tracks with duration over about 40 minutes. Album was released by Forte Music Entertainment.