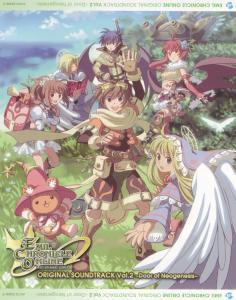 GungHo's Emil Chronicle Online is a fantasy MMORPG that is moderately popular across Asia. Having just entered its sixth year of operation in November 2011, the title has received a new soundtrack compilation, appropriately titled the Emil Chronicle Online 6th Anniversary Soundtrack. Making the franchise's previous soundtrack releases obsolete, it features four discs of music and compiles music from both the original game and its various updates. ACE, composed of CHiCO and Tomori Kudo, created all the music here and matched the fantasy visuals beautifully. How does over half a decade of music sound?

The second volume often builds on the scenic focus of the original release. For instance, "Play in the Wilderness" is the kind of piece that encourages the player to stick around the area it plays. It's utterly infectious with its flamenco-inspired guitar duo, laid under a pleasing flute melody. The combination is a great way to revisit the organic flavour of Emil Chronicle Online's fantasy world without relying on tired clichés. "The tune of the vesper" is similarly soft, almost sounding like a mix of the work of Motoi Sakuraba and Kumi Tanioka, with its harp and shrill flute. A moodier addition to the series, "The thing (hiding in darkness)" begins somewhat boring, but very quickly evolves into something beyond fascinating — constantly throwing out new ideas at the listener, all of which successfully evoke an unsettling feeling. Another central dungeon theme "Over the infinite helix" leaves listeners pumped and ready to continue the album, with its rhythmic beat and dark atmosphere.

However, the second volume also incorporates plenty of other styles in a fairly derivative manner. "Road of the brave" has the heroic theme covered with its heavy brass, while "Sacred Duties" is unsurprisingly a church organ solo and a mediocre one at that. For the festive events, there's the Halloween-themed "The Laughing Man" is silly and whimsical — featuring some disconcerting laughing samples towards the end — as well as a jazzy compilation of Christmas carols on "Holy day, Holy night". "Crispey winy early spring" captures a traditional Japanese feeling quite fluidly with its koto and similar instrumentation. However, the stylings themselves are a bit boring until the melody picks up a good way through. This Asian style continues through the similarly composed "blossom shower" and "Matsuri!".

The soundtrack also explores the races of Emil Chronicle Online more. To portray the humans of the world, "theme of Emil" is bright, cheery, and fun. ACE integrate their jazzy touches into this track to pleasant effect. By contrast, the angelic Titania are captured with an evocative electric piano melody that is bound to inspire deep emotions. The demonic Dominion are portrayed with a much more contemporary sound; while a welcome break from gothic choruses, it definitely sources inspiration from Michael Jackson a little too closely. The release ends with some exclusive arrangements of popular tracks from the first volume, "Happy Merry Feeling", "The World of Curiosity", and "Boy Meets Girl". While decent enough, they're not particularly special and feel a bit tagged on.

ACE seem to have been a little lost when creating the second volume of music for Emil Chronicle Online. While they produce a few tracks that expand on the fantasy basis of the original, others deviate into all sorts of dull clichés. Such tracks all add to the diversity of Emil Chronicle Online, but aren't as enjoyable or definitive as the more organic pieces of the first release. It's best to skip this release in favour of the Emil Chronicle Online 6th Anniversary Soundtrack.

Disc 2 is an enhanced CD with a data track containing ECO desktop accessories.