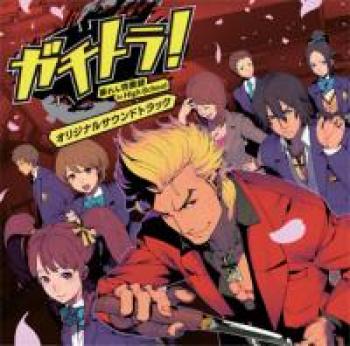 For his debut solo soundtrack, Yasushi Asada of noisycroak took on a niche PSP game developed by Spike. Fusing a variety of styles such as jazz, pop, and his trademark rock, Gachitora! -Rowdy Teacher in High School- Original Soundtrack features a large number of tracks on its single disc. When given his own title, can Asada make his mark amongst the rest of the noisycroak staff?

The soundtrack opens with the militaristic beats of "Teacher." Brass leads the way for the soft melody, lending a gentle, yet pumped up attitude to the optimistic melody. These emotions are reciprocated in the aggressive "Bloodthirstiness," a track containing a gritty, grungy sound and some enjoyable electric guitar work. The curiously named "Nudeness" has a more serious tone, the interwoven synth playing a more complex melody that manages to get the heart racing. "Fighting" unfortunately spends too much time on the buildup to what amounts to a respectable if not short climax.

There is a jazz presence on the album. An amusing example is the otherwise dramatic "Yakuza," where some brass plays a silly but thoroughly fitting background role. "Charm" is dominated by the saxophone, which breathes a very interesting life into this otherwise soothing piece. "Peaceful" manages to soothe as well, despite its peppy beat, thanks to its liberal usage of smooth strings and, well, peaceful melody. The same peppy beat is found in the pop-like "Everyday," which equally manages to calm despite its general bounciness. Likewise, the jazzy piano in "Affair" is rather relaxing.

Despite the laid-back feel of the soundtrack, there are some surprisingly satisfying entries. "Shopping" is a curious synth piece that manages to encompass and rivet the listener, despite being not more than a mood-setting, almost experimental piece, while the soft piano and flute of "Mildness" work together quite magnificently in this calming piece. "Attractiveness," despite its initial cutesy sound, hides a surprisingly deep melody below its highly peppy and addictive beat, while the comical "Amusement" attempts no such complexity. "Prize" is rather quite delightful: an airy blend of synth and a pop-like beat.

The final boss theme, "Struggle," leaves a bit to be desired. It possesses a very gruff sound, more so than any other piece on the album, but doesn't feel climactic enough, instead relying on the tone to paint the track's namesake. That isn't to say that it's totally underwhelming, however, and it does fit well into the soundtrack's style. The ending theme, "Core," features the relatively deep yet rather endearing voice of SAK., and a rousing, pumping melody quite well suited to the soundtrack as a whole. The strings provide a rather excellent backdrop for the piece before the electric guitar plays a rather thrilling bridge. Overall, an expected, but nonetheless quite enjoyable theme song.

More than a plain old soundtrack release, the album ends with two arrangements. The first, "Fighting Two," receives a fuller sound bequeathed by newfound guitars. Yet despite its more evolved sound, the track still leaves much to be desired, losing its synth in favor of a grungier overall sound. "Bloodthirstiness Two" receives a more complex treatment; the piece is slowed down a notch and is fused with a more traditional Asian style to create a rather endearing ending to this album.

Yasushi Asuda is quite clearly a talented composer given his work on this album, though I can't feel that he spread himself too thin on this endeavor. A large variety of styles are touched upon, but none of them really feel sufficiently developed, with the tracks rarely lasting more than a minute and a half if that. I would really like to see a more focused album, either developing one style fully, or a longer album wherein more time is devoted to each track. What he's created here is too jumbled to truly succeed, but absolutely betraying a large source of only partially tapped potential I look forward to see come to fruition.

Album was composed by Ясуси Асада and was released on June 22, 2011. Soundtrack consists of 44 tracks tracks with duration over . Album was released by noisycroak Records.