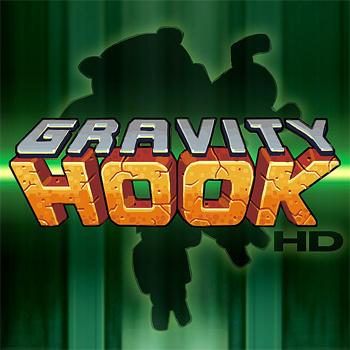 Danny Baranowsky's high-profile soundtracks for Super Meat Boy and The Binding of Isaac were very refreshing to listen to. The composer also has an impressive backlog of soundtrack to indie games that he has scored over the years on his official website. The majority of them are short, containing just a few tracks. One of them is Gravity Hook HD, a seven track soundtrack he composed for a well-received iOS title.

Gravity Hook HD is an enhanced iOS version of the flash game Gravity Hook. As a result, the majority of the soundtrack comprises of arrangements of the soundtrack for the original game. The arrangements of the into and high score themes both retain the retro flavour and strong melodies of their flash versions. But free from any technological restraints, Baranowsky certainly gives both tracks a facelift. He pumps the former with rock riffs and enhanced synthesizers, while emphasising a sci-fi ambience on the latter. While brief, the final tracks end up making quite an impact both in and out of the game.

The rest of the soundtrack is dedicated to five tracks used during the main gameplay. The relaxing pace of these tracks adds smoothness to the casual experience. While the first three tracks are based on their Gravity Hook counterparts, Baranowsky has completely updated their samples and revised their arrangements. "Gameplay Track A" dazzles thanks to the warm synth lead that presents the melody, against a robust accompaniment featuring electronic shuffling. Equally enjoyable is the trance-influenced arrangements of "Gameplay Track B" and the more abstract version of "Gameplay Track C". But once again, Baranowsky still keeps the references to the retro nature of the gameplay.

Perhaps the biggest highlights of Gravity Hook HD are the two original tracks, "Gameplay Track D" and "Gameplay Track E". These sound exceptionally vibrant thanks to their blend of bright chiptune elements and more contemporary elements. The latter undergoes an especially beautiful buildup and is a delight even outside the game.

With Gravity Hook HD, Danny Baranowsky has offered a perfect update of the Gravity Hook soundtrack. He managed to retain the retro feel of the original, while revamping it with new samples, contemporary influences, and even a few new tracks. The final soundtrack is quite brief, but still suitable for the game and enjoyable on its own. Indie fans should definitely pick up the soundtrack, as it can be bought for whatever you'd like to pay with no minimum amount. It can even be downloaded for free, but do consider contributing so that Baranowsky can continue to supply and surprise us with more amazing retro-themed scores.

Soundtrack to the iPhone/iPod Touch game Gravity Hook HD.
Album was composed by Дэниэл Барановски and was released on March 05, 2010. Soundtrack consists of 7 tracks tracks with duration over about 15 minutes. Album was released by dB soundworks (distributed by Bandcamp.