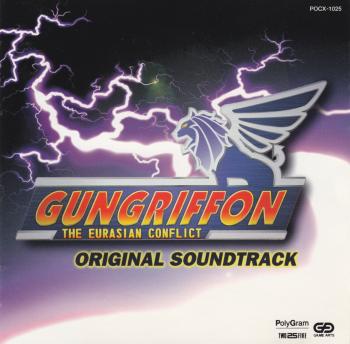 Motoaki Takenouchi was a versatile and experienced composer, a former disciple of Koichi Sugiyama alongside his contemporary Hayato Matsuo. Unlike his contemporary, Takenouchi left the game music industry around the time he had finished the soundtracks to two games: SD Gundam Over Galaxian and, more notably, Gungriffon. In many ways, Gungriffon's soundtrack is representative of Takenouchi's signature style: potent rhythms, simplistic melodies, and masterful use of synths and other instruments. The result evokes the atmosphere of piloting a walking, rolling tank through a battlefield. Because the soundtrack features all aspects of his style — even his orchestral side, somewhat obscured in the annals — this very rare CD is a masterful, fitting end to Takenouchi's discography, and also marks his departure from the industry in excellent form.

Motoaki Takenouchi has always been a master of dramatic themes, particularly when he got down to writing battle themes for a game. Gungriffon, a game based entirely on fast-paced, challenging combat, was more than suiting for him. "Do or Die", the first track of the album, quickly builds up suspense, first with radio dialogue and vamp percussion to create the image of impending battle, before the main theme for the whole game enters. Finally, the battle starts with the introduction of pounding percussion, a pulsating and brisk series of synth lines, and great use of organ and string synths to carry the simple, yet powerful theme. Many of these elements are also to be found in "Delirhythm II": rippling synth lines and bass, coupled by the vamp bass line as all three of those essential elements support the angular melody on piano. These battle themes both share a similar tension and intensity, though with differences: "Do or Die" evokes a more triumphant view of battle, while "Delirhythm II" focuses on the grave danger and fear of battle. In both ways, these battle themes are stark and unique to the man who wrote them — they also happen to sound great, in and out of context!

While "Stay Alive", "Red Signal", and "Spiritual Tensions" work along the principles used in the two more notable battle themes, Takenouchi is also adept at creating less intense, more spacious music. Take "Silent Night", for example: minimal, albeit active percussion keeps the same feeling of motion that helps complement the pace of battle, while accentuating piano chords and flourishes set the scene for a flute interlude and use of synths. Overall, this whole mix of elements paints an active and brooding image of a battle in the night, with angularity and mystery to be heard within the alleyways formed by violin and piano. "Underdog" also speaks of the night; however, it is even more minimal, focusing on synth lines, entering and leaving the piece, though with a steady progression towards a more full sound as the track progresses. However, I feel this takes much too long personally — the length of this track makes it difficult to listen through completely! These feelings can also be heard on "Collapsed Discipline - Type H", though this piece is even more contextual, offering an atmospheric introduction to the player's entrance into a nuclear silo before a segue into a battle theme. This part is supported by a lively synth line as the intensity is sustained throughout your sojourn through the silo, helped by dramatic bells and dissonance.

And after all this has happened, why, we've come upon the true "Theme of Gungriffon"! Takenouchi, himself know for a unique style in writing battle themes and atmospheric adventures, was also skilled with orchestration, a skill he developed when arranging for his own mentor's albums. In contrast to the other battle themes prominently featured on the album, this track is slower paced and more focused on a triumphant build-up of synth melody, beautiful backing parts, and active percussion and bass. It also represents the full realization of the main theme of the game, now beautifully concluded with brass bravado and ultimately flowing into "After Conflict". While "Theme of Gungriffon" based itself off of a slow and steady development, this credits theme simply goes at it: the simple melody is strengthened through a notable guitar lead, synth backing, and well-placed solos and repetition. For what it is, this closing track is a fitting conclusion to the whole musical adventure — when the battle is over and done, it's never a bad time to celebrate and feel as though you are.

The two bonus tracks to follow, nonetheless, offer interesting material. "Bonus Tracks 1" is a series of contextual menu themes used for briefing screens and the options menu, among other contexts. Of course, they're all well put together. "Bonus Tracks 2", in contrast, is an unused track that is more morose and orchestral than anything else on the album. Thankfully, though, it's well-developed and effortlessly describes a depressing scene, perhaps of the destruction that war has caused.

Throughout the album, all of Motoaki Takenouchi's versatility can be heard in each of its different styles: the dramatic, intense battle themes; his spacious, more mysterious music; and his orchestral, melody-driven main themes. Overall, each composition has something to offer, and are well-placed on the album to ensure a steady progression through the music. Compared to the music of his contemporaries, he stood up very well and offered a distinct musical feel to the Gungriffon games. This album is very rare and difficult to get hold of, but it's an exciting look into Takenochi's career and, in my opinion, the best and most representative of Motoaki's musical prowess.

Despite the title of this album, tracks 1~10 are arranged. Track 11 is a medley of original music from the game, and track 12 is an unused piece.