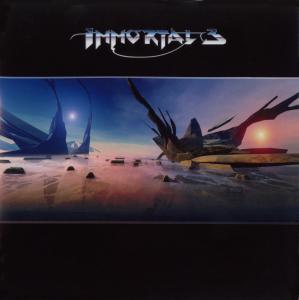 2006's Immortal 3 is the culmination of a series of remix albums dedicated to the Amiga's classics. Featuring two discs and an incredible 35 tracks, the album featured more music than its predecessors combined. It lacked quite the same exuberant presentation as its predecessor — notably omitting track-by-track liner notes — but producer Jan Zottmann made up with it with a great volume of tracks. Once again, the arrangers were given a free reign on how to treat the tracks — many of them their own originals — resulting in a particularly varied album. But does the increased volume and diversity necessarily result in a better overall experience?

Immortal 3 immediately demonstrates its more lavish production values than its predecessor with its opening track — a full-blown orchestral medley dedicated to Apidya by classical orchestrator Adam Klemens. Though this sampled orchestration has since dwarfed by Symphonic Shades, it demonstrated the dramatic potential of symphonic interpretations of Amiga music. The rendition of Tim Follin's Ghouls 'n Ghosts is also incredibly entertaining with its folksy guitar riffs and elaborate whistle improvisations. It's in no way thematically related to the Japanese games and, perhaps refreshingly, doesn't sound gothic in the slightest. Another surprising addition is Tim Wright's Agony. The original was a shift from the typical action-packed synths of the Amiga with its soothing piano-based tones. The arrangement elaborates on this — slowly blooming towards its beautifully understated climax. It's a pity that the budget couldn't be afforded for a studio recording session, but the piece is still emotional. This tender element is further explored with the beautifully realised piano improvisation dedicated to Ambermoon.

Plenty of tracks here maintain the Immortal series' emphasis on nostalgic synthy tunes. Allister Brimble stays pretty close to the original on Alien Breed, but in doing so provides an excellent demonstration of how old synths can make a great impression — the science-fiction sound he creates here is so deep and immersive. The similarly styled but more upbeat adaptation of Psygnosis' hidden gem Ork is also a very welcome addition here. Chris Hülsbeck returns to personally offer remixes of the second and third Turrican titles, both conspicious absences from Immortal 2; while these remixes are less colourful and elaborate than those on his main albums, they're still highlights because of their nostalgic treatment of strong melodies — in other words, they're saved by the originals. Other retro-styled highlights span Lotus 3: The Ultimate Challenge's pumping beats, Katakis' melancholy wails, and Amberstar's sensitive reflections. And who could forget about Shadow of the Beast 2, with its fitting, addictive, if bizarre blend of gothic melodies and tribal rhythms?

A few tracks here have a more contemporary touch. Olof Gustafsson's Pinball Dreams and Pinball Fantasies — both legendary games back when pinball was all the rage — are among the best electronic pieces here; while these tracks contrast with their respective smooth trance and abstract industrial stylings, they capture the infinite possibilities of a pinball game with all their interesting colours. Meanwhile Speedball 2 and Cardiaxx make an impact with their overdriven rock riffs — the latter a particularly rich adaptation from the Nugel Bros. While most of the aforemnetioned tracks are accessible, there are a couple of arrangements that were definitely 'misses' for me. The rendition of Gods' title theme may stay faithful to the original — so much so that no arrangers are credited, only performers. But when the original comprises nothing but bizarre vocals and retro beats, this isn't necessarily a good thing in this case. The parodic Trolls is also a select taste with its over-the-top vocals, but at least it is reserved as a bonus track and acknowledges right away that can be annoying.

With so many tracks, there is an incredibly variety of melodies, moods, and styles on this album. While this is largely a good thing, keep in mind that Immortal 3 is a less cohesive listening experience than its predecessors. Just look at the way the opening's grandiose orchestration clumsily shifts to Gods' peppy vocals and Theatre of Death's moody beats. Likewise, while eccentricities such as No Second Prize's blend of trippy Indian vocals with jazz fusion instrumentals are interesting highlights on their own, they don't necessarily make a positive to contribution to the album as a collective whole. Furthermore, the playful tones and chiptune references of Fire & Ice, Defender of the Crown, and Disposable Hero — while perfectly enjoyable in their own right — are such major shifts in tone from an otherwise moody and ethereal album that they can be distracting. In order to capture the diversity of the Amiga's music, it was necessary for Zottmann to incorporate pieces like these, but they will present a dilemma to many listeners.

Put simply, Immortal 3 is the most expansive dedication to Amiga music out there. When official albums dedicated to Amiga titles are so scarce, it's incredible that Jan Zottmann managed to incorporate so many classics — and feature so many original composers — in one album. The diversity results in a rich and varied listening experience, but be warned there are some interruptive experiments and sloppy productions along the way. Perhaps the best way to appreciate Immortal 3 is through selecting individual highlights for one's iPod rather than listening to the entire album in one session. But either way, this album is a must-have for Amiga fans.