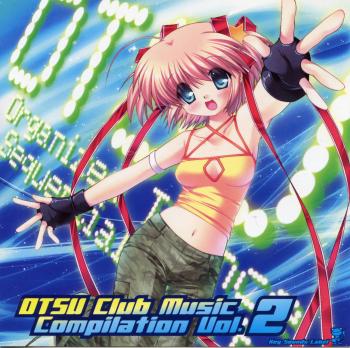 OTSU Club Music Compilation Vol. 2 is the second in a series of electronic remix albums produced by Organized Trance Sequential Unit (OTSU). Unlike its predecessor, it is solely dedicated to the music of one of Key's more recent titles, Little Busters! What's more, the album this time is surprisingly pretty good.

An impressive example of the remixing on the album is "Boys Don't Cry". Having previously featured in Ontology, this track is no stranger to ethereal remixes, but Daydream's version is much more wholesome than its muddled, repetitive predecessor. For one, it makes the most of the original music — integrating its component motifs in an interesting way throughout the track and allowing its most emotional section to come to the forefront on piano and guitar from the 3:19 mark. What's more, the production is excellent — all the beats sound clean and modern, while also having an expressive quality like the best trance music should. At 8:37, the remix is rather long like most others on the album and it certainly could be cut down through a short introduction. But for the patient listeners, all the layering here builds up the atmosphere and makes the full rendition of the melody entirely satisfying.

While most tracks have a trance emphasis, there is a pleasant range of moods on this release. "Gather the Light" maintains the ethereal sound of the aforementioned track, while carrying a more tragic undertone. "In the Town of Incessant Rain" is the most emotionally charged of the additions, with choral renditions of the main melody being chillingly suspended against static beats. Tsukasa's "Epic Mortal Fight" retains the hard edge of the original by incorporating some wonderful guitar licks into the trance soundscape, while Taishi's "Lamp" stands out for its daring yet stylish incorporation of distorted chip sounds. Less impressive are "Showing Signs of a Mystery" and "Ring! Ring! Ring!", which labour the focal ideas and have a more aseptic sound. But even these tracks are listenable and don't detract significantly from the rest of the album.

The theme songs for Little Busters! also received the OTSU treatment, with the vocals still intact. While the rendition of "Little Busters!" is ten minutes long, impressively it is entertaining throughout. Initially building intrigue through layering electronic forces, ZTS eventually treats the vocals in an ethereal way. This prolonged development makes the elating climax of the track worth the wait. Svenson's treatment of "Faraway" is also a highlight. While the opening is quite abstract, the dreamy trance beats that emerge will certainly appeal to mainstream listeners and sound especially deep during the chorus. The chromatic shift at the 7:30 mark is also masterfully implemented. Less subtle is Blasterhead's hardcore remix of "Alicemagic", but it retains the brash energetic sound of the original, while Tsukasa's version of "Song for Friends" is a straightforward adaptation of the original in a trance setting. The album closes with somewhat shorter radio edits of the opening and ending theme songs.

Consumers will need to have some affinity for trance to appreciate the long and subtle remixes on this album. But for the most part, OTSU do a good job of adapting the music for Little Busters! into a trance setting. They retain the melodious and expressive nature of the originals, while offering some fresh new perspectives. The vocal arrangements are especially good.

Album was composed by Дзюн Маэда / Manack / PMMK / Синдзи Орито and was released on February 29, 2008. Soundtrack consists of 14 tracks tracks with duration over more than hour. Album was released by Key Sounds Label.