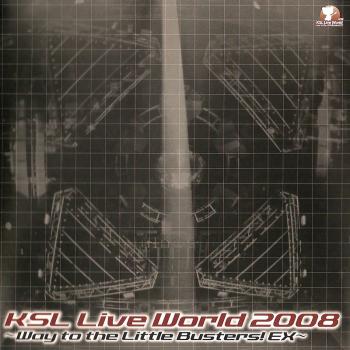 A month before releasing Little Busters! Ecstasy in Japan, Key held special live concerts in Tokyo and Osaka. Opening with Little Busters!, the concert featured vocal performances from across Key's discography by the artists Rita, Lia, and Chata. The concerts delighted fans at the time and an audio recording of the Osaka performance was released in time for the New Year.

Right from the opener "Little Busters!", this recording demonstrates the potential limitations of the live arena: the balance between the vocalist and instrumentalists is often off, there are various noises and muffles in the recording, and the crowd are potentially obnoxious with their cheers and clapping. A further problem is that Rita, while a proven studio sensation, isn't able to handle a live performance. Her voice sounds strained in many parts of the song and her intonation, particularly at the three minute mark, is frankly terrible. The girly singer wasn't able to control her excitement when faced with an audience and, as a result, the quality of her performance dropped. She copes better with the softer material on "Faraway" and "Song for Friends", aided along by a robust band accompaniment, to create some beautiful sounds from the stage. But these adaptations still sound unpolished compared to the originals and inevitably her vocals on "Alicemagic" are a mess.

In addition to the continuing audience noise and balance issues, the problems with the performances don't end with Rita. Chata replaced riya as the vocalist behind Clannad's theme songs here, "Mag Mell", "Tiny Palm", and two performances from the image album. While these songs are definitive highlights of Key's discography, Chata's voice simply lacks the maturity to carry such hits, which otherwise stay faithful to the originals — she may have been right for murmur, but she does not convince here. Thankfully, Lia took over in the third portion of the concert and offers several definitive performances. "Bird's Poem" is as magical and lyrical as ever, while "Spica" was a fantastic choice from the more obscure realms of Key's discography. Of the three vocalists here, she is the only one that is able to capture both the pitches and emotions of the studio-recorded originals on a live stage.

This audio recording also includes long announcements from the MC Tomoe Tamiyasu — the squeeky voice of Little Busters!'s Rin — every two or three pieces. She also chats with original composer Shinji Orito and the three vocalists during the course of the concert. For many Japanese fans, these MC tracks will be a great way to relive the concert. But others will be lost in translation or simply find them annoying distractions from the music. The album closes with a series of encores: Lia's divine version of Air's "Summer Lights", Chata's fragile performance of Clannad TV's "A Big Dango Family", and, of course, a reprise of the Little Busters!'s theme song from everybody's favourite vocalist. Performance issues aside, these items provided the ideal way to close the concert.

KSL Live World 2008 -Way to the Little Busters! EX- was a well-planned concert jam-packed with highlights — both well-known and obscure — from across Key's discography. However, it is let down greatly by lack of rehearsals and unsuited vocalists, namely Rita and Chata. While most fans didn't notice the deficiencies of the performances on the live stage, they're very pronounced with this live recording. And with both the studio and live versions to choose from, most will want to pick the former. Indeed, this album conveniently compiles Key's vocal favourites into one single recording, but most tracks are inferior to the originals. Only purchase this album if you're a Japanese fan looking to relive an impressive concert.