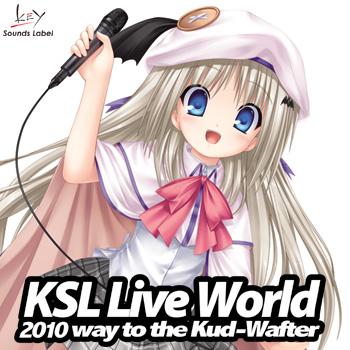 Shortly before the release of Kud Wafter, Key held their second set of live concerts in Tokyo in May 2010. The concert was similar to its predecessor, focusing on renditions of the company's vocal themes in a live setting. However, this time round the concert spanned more material and included several additional vocalists.

As with the previous concert, you should expect plenty of audience noise, balance issues, and, of course, lots of shrieking girls here. The openers "One's Future" and "Rin's Secret Love Song", performed by the voice actors of Kud and Rin, certainly aren't for the faint-hearted with their childish vocals and hyperactive shout-outs. Returning from the first concert, Rita still struggles to maintain her intonation and volume with the Little Busters!'s theme songs. What's more, there are also once again plenty of MC tracks here from the various vocalists and voice actors, which potentially distract from the music. Such additions all stay true to the well-received concert and hardcore Key fans will embrace them, but most outsiders won't enjoy them.

Spanning three discs, this concert features quite a lot of material not present in the original. The new additions are a mixed bag. In particular, the insert songs from the animation Angel Beats! seem to lose the magic of Key's best from Clannad and Air; the ballad "My Song" comes across rather bland and sample, while the anthem "Thousand Enemies" is surprisingly jarring in places. The release compensates with two standout performances from Lia, the retrospective "Farewell Song" from Air and the uplifting "My Soul, Your Beats" from Angel Beats. While the complex instrumentation of the originals is hidden in these renditions, Lia brings out the most of them with her performance. She also plugs her own album with the impressive "Karma".

That said, the majority of the material featured here is rehashed from the first concert. The theme songs from Air, Clannad, and Little Busters! once again comprise the central highlights of the release. Most of the performances are similar to the previous concert and, while enjoyable live, they rarely satisfy as much as the studio originals. A clear improvement is Clannad's "Mag Mell" and "Over", where the evocative original singer riya returns to replace Chata. The encore sequence is similar to the original concert, with a second perform of "One's Future" inevitably being the final track, while lesser-known items in Key's discography like "Birthday Song, Requiem" and "Hanabi" are regulated to the B-sides at the end of the third disc.

KSL Live World 2010 -Way to the Kud Wafter- will be valuable to many fans, as it encompasses almost all of Key's lauded vocal themes. However, the live renditions rarely compare to the studio-recorded originals — the vocals tend to be weaker, the instrumentals thinner, and the recording unpolished. While a better purchase than its predecessor, most should go for the studio albums instead. Perhaps one day, Key will release a compilation of all their vocal themes in a studio setting, but it'll be a long wait.