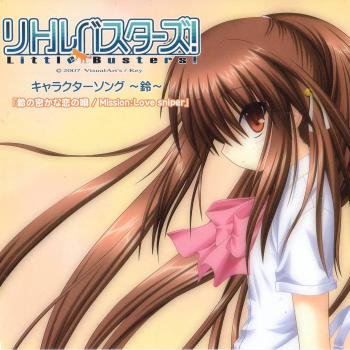 Little Busters! featured some of the most memorable characters in all of Key's releases. The lonely and eccentric heroine Rin especially endeared to those who played the title. Key eventually decided to commemorate the character with an image song, "Rin's Secret Love Song", and released the track along with several other goodies in a special single available at Comic Market.

"Rin's Secret Love Song" is a decent image song. Rin's voice actress Tomoe Tamiya returned to sing the piece and she captured the youthful exuberance of the character once more. Given she is principally a seiyuu rather than singer, her voice certainly isn't as conventional or refined as Key's main vocalists; indeed, some will find her screechy voice unbearable. Arranging by MintJam's TERRA, the backing track is robust but relatively simple compared to Little Busters!'s theme song. It certainly fits the character, but not all with love it.

The B-side "Mission: Love Sniper" is a vocal arrangement of Rin's theme song from the main song, "Ring! Ring! Ring!". The melodies and progressions of the original are as catchy as ever, and are nicely emphasised by ARM's arrangement. However, it's all too clear from the clumsy verse that the melodies weren't originally meant for singing. Given Tamiya's piercing voice, the original is also much easier to appreciate.

"Jupinya" is a peculiar vocal performance of Holst's "Jupiter". While fans of Rin will find it charming, most classical fans will find this performance horrendous. The release ends with a remix of "Rin's Secret Love Song" by MintJam's setzer, which makes some stylish improvements on the original's instrumentation.

It's necessary to like Rin's character and Tamiya's voice to appreciate this single. Those who have played Little Busters! are likely to find it charming and fitting, whereas others will find it annoying and superficial. Overall, a decent character image song.

Released at Comic Market 73, as part of a set along with a Little Busters! Arrange Album (KSLA-0037) and other goods.

mastering: Shinji Orito
Album was composed by ARM (IOSYS) / Густав Холст / Дзюн Маэда and was released on December 29, 2007. Soundtrack consists of 4 tracks tracks with duration over about 20 minutes. Album was released by Key Sounds Label.