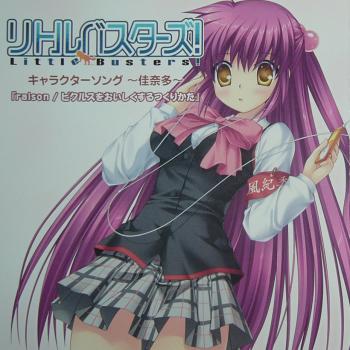 Little Busters! and its adaptation Little Busters! Ecstasy featured some of the most memorable characters in all of Key's releases. An important character featured in Ecstasy is Kanata, a rightful and perfectionistic girl. She inspired Key's sound team so much that they even dedicated an image single to her.

"raison" is certainly more memorable than the A-side on Rin's image single. There's plenty to like here: a punchy verse peppered by jazzy piano chords, a gliding chorus reminiscent of Air's best, and even a few guitar solos and breaks. Keiko Suzuki captures the character of Kanata fine with her relatively mature and conventional voice. The contrast with Rin's portrayal on a previously released image single is astonishing.

The B-side, "How to Make Pickles Delicious", is a conventional ballad despite its quirky name. Suzuki's lack of expertise as a vocalist is emphasised more here and she sometimes struggles with the long flowing lines. But there is something very intimate about her performance nonetheless, while the gentle acoustic guitar and piano backing also inspires thoughts.

The release features a few bonuses, but they're not worthwhile. There are three tracks featuring Kanata talking, sometimes above instrumental backing. There are also karaoke versions of the two theme songs.

This single doesn't stand out as a must have. After all, it features two conventional songs and average performances dedicated to a forgettable character. However, it's still quite well done and the A-side, especially, is one of Key's better tracks in recent years.

Released as part of the C77 Key goods set.
Album was composed by PMMK / Синдзи Орито and was released on December 29, 2009. Soundtrack consists of 7 tracks tracks with duration over about 25 minutes. Album was released by Key Sounds Label.