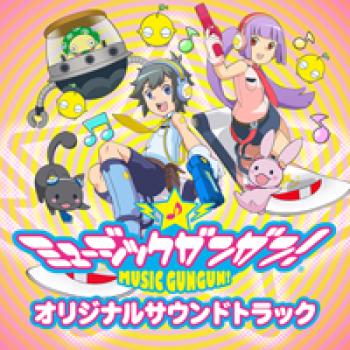 The Music GunGun! Original Soundtrack features the music from the original edition of Taito's rhythm game. Unlike most rhythm games that rely on physically hitting buttons or tapping a screen, the premise behind this is to shoot at the screen to match the patterns on the screen. The title offered a mixture of original music, classical covers, and remixes of Taito favourites, courtesy of Hirokazu Koshio and Shohei Tsuchiya. They were compiled together on to a 25 track digital download.

Music GunGun! features three original compositions from Taito's in-house sound team. Contributed by Hirokazu Koshio under his COSIO alias, "Theme of Music GunGun!" is a rock-oriented theme that matches the rhythm gameplay. The kawaii vocals of Azuma Sakamoto and Megumi Kojima don't exactly overstay their welcome, but may be too cute for some. The melody itself is pretty engaging, offering an energetic listen, and helps diversify some of Koshio's compositions. The synthesizer and rock solos definitely add another dimension to the tune as well. There is also a vocaloid version of this featuring Miku Hatsune and Rin Kagamine. "M.G.G. Second Theme of Music GunGun!" is much different in style, featuring a funky jazz mixed with electronic accompaniment; however, I find that the addition of some rap diminishes the overall effect a bit.

Shohei Tsuchiya, also of ZUNTATA, contributed "What are we running after?" to the original game. It is a pretty funky jazz theme that really manages to bring a solid composition to the table. The melody is quite engaging and the overall atmosphere is fantastic. The addition of a synthesizer solo and plenty of percussion make it fitting for a rhythm game. "MUSIC STAR," composed by Ryo Kurata and featuring Miku Hatsune, is another pretty catchy tune featuring a heavy electronic beat and lots of beautiful synthesizer accompaniments. However, the vocals will be hit or miss for most people. That's it from the original section and, in contrast to the sequel, there's not much on offer here.

There are also plenty of arrangements on the album, which are sadly uncredited on the album, and due to the nature of the originals, their mileage will certainly vary. The tributes to the classic games, like "Captain Neo M.G.G. Version" or "Bubble Bobble Medley", will certainly please fans featuring that classic sound mixed with some electronic beats to match the style of the game. Others are dedicated to more recent games that Koshio and Tsuchiya have contributed to, namely Darius Burst, Space Invaders Extreme 2, and Arkanoid DS, and continue the modern Taito sound. It's also good to see cult favourites like Psychic Force 2012, Densha de GO!, RayStorm, and Night Striker.

However, the classical music arrangements are where some people may find offense, particularly if they are classical music purists. Lots of popular classical tracks are given contemporary takes suitable for the rhythm game. Expect electronic takes on Romantic favourites such as "Swan Lake," "Parade of the Wooden Soldiers" and the "William Tell Overture". There are also more rock-oriented arrangements of Baroque classics "Air on a String of G" and "Canon in D" that might divide listeners. There are also other styles present, like the Asian arrangement of "Jupiter".

In the end, for the type of game it accompanies, the Music GunGun! Original Soundtrack music certainly delivers in creating energetic tunes to match the rhythm shooting gameplay. In the end, this album is low on quantity — with lots of remixes of classical music and video games, but few original compositions. Of those original tracks, most are derivative and not all will enjoy the vocal performances. The arrangements featured on the album also very in their quality and may also vary in enjoyment on a stand-alone listen. It's best to skip this album in favour of the follow-up, the Music GunGun! Best Hit Tune! That has many more original tracks, including most of the highlights here.