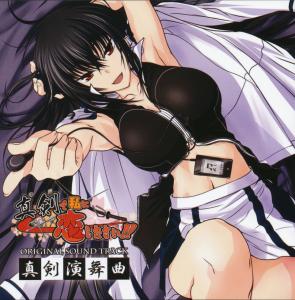 Maji de Watashi ni Koi Shinasai! (also known as Oh! Samurai Girls) emerged as 2009's best-selling bishoujo game and even inspired an anime adaptation. It game's score was created almost in its entirety by newcomer buzz free (real name unknown), though a few vocal tracks were incorporated as well. Featured on the game's soundtrack release, the background music tends to be relatively typical fare, enhancing the emotional quality of the game without ever particularly standing out.

"Kazama Family" really captures the game's high school setting and upbeat characters with its pop-flavoured stylings. Like most additions, it doesn't deviate much from the bishoujo norm and isn't particularly memorable. Nevertheless, it's an easy enough listen and does what's required. The composer builds upon this mood with plenty of other additions, ranging from the catchy piano-laced anthem "In the Sky of the River God" to the liberating jingle "One Summer". Other titles such as "Crimson Sky" and "Friendly Wind" evoke the more softer, relaxing tones most have come to associate with bishoujo titles. Such tracks are complete clichés, right down to their excessive use of reverb synthesizers, though they're still likely to move listeners. "The Woman is Sorrowful" ticks another category: contemplative piano piece. Featuring little more than some semi-improvised melodies and root arpeggios, this track is certainly drab and simple. However, there are still enough nuances to engage players in-game at least.

Though the soundtrack is dominated by typical imitations, it does have some hidden depths. "The Dream's Conclusion" emerges as a surprise early highlight, with its hauntingly beautiful progressions and electro-acoustic soundscaping capturing the boundary of innocent and reality. "Pillow Talk" and "Storm of Love" provide dashes of a more romantic colour and even incorporate some orchestral elements. The more lavish orchestrations of "Kuki Kagura" and "The Kick Off of the Bushido Girl" also provide some excitement; while not up to the standards of the industry's best in either arrangement or implementation, it's clear that buzz free has some command of orchestral language and is able to use it to create a spectacle. However, the tracks that surprise here are relatively few amidst all the unremarkable imitations or brief throwaways.

The composer brings out the electric guitars in "To Become Your Hero", "The Man is Courageous", and "The Mark of the Beasts". These tracks do a good job of capturing that earnest leap into action and are quite entertaining thanks to their flashy leads. Yet the dated sampling, thin accompaniment, and derivative approaches of all these themes mean they don't emerge as entirely victorious. The only exception is the somewhat less formulaic "Fateful Fight". Other action tracks, such as "To be Plotted Against" and "A Close Game!", also bring in an electro influence. But once again, while these tracks bring diversity to the soundtrack, they don't stand out much in their own right. Some of the contemporary pieces even prove irritating on replay, such as the blaring "Childhood Friend", the gimmicky "The Abominable Second Floor", or, with its abundance of orch hits, "One Hundred Generations of the River God".

Given the characters are dedicated to their samurai ancestors, several tracks on the album have a traditional Japanese influence. "The Many River Horses of Eternity" and "Solemn Barrel at the Academy of the River God" are particularly scenic tracks, the latter capturing the dark beautiful aura of Japanese music with its shakuhachi lead. "The Fierce Fight of the Bushido Girl" also hybridises such instruments with action components, though doesn't reach anywhere near the heights of the best samurai action franchises. The darker component of the soundtrack is explicitly exposed with "A World Beyond Redemption", a typical but impressive enemy theme featuring some brooding organ underlay. However, this influence isn't effectively resolved during the unremarkable conclusion. The soundtrack finishes with a straightforward piano version of "Crimson Sky" and an extended voice collection.

As far as bishoujo soundtracks go, Majikou is fairly average. There are the upbeat pop-flavoured tracks, the sentimental reflective pieces, and the odd action-packed excursion. They are generally convincingly done and evoke just the right emotions in the game, but tend to be predictable and uninteresting otherwise. As a whole, the album is a pleasant, pretty, and occasionally spectacular listen. However, it is best skipped in favour of more creative bishoujo soundtracks, including Basiscape's sequel album.

Album was composed by buzz free / C.G mix / Hyo-sei and was released on October 30, 2009. Soundtrack consists of 50 tracks tracks with duration over more than 2 hours. Album was released by Minatosoft.