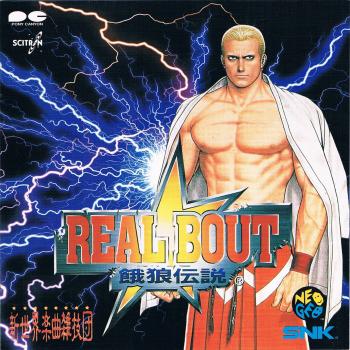 While Real Bout Fatal Fury inspired a whole spinoff series, the original title was actually just a considerably enhanced edition of Fatal Fury 3. SNK largely preserved the excellent Fatal Fury 3 soundtrack for the game, Toshio Shimizu and Hideki Asanaka did offer a few new themes for the new screens and characters. The Real Bout Fatal Fury album features all the music from the Arcade game, including tracks originating from the previous game.

The soundtrack is dominated by character themes ported over from Fatal Fury 3, most of which demonstrate SNK's greater security with their signature sound. The theme for returning hero Terry Bogard, for instance, is a fantastic hybrid of the company's jazz and rock styles. The exuberant horn melodies capture his free spirit, while the thrashing rock riffs bring energy to his fights. It's so much better than his rip-off theme from the previous game. Appropriately, the theme for newcomer White Franco has more weight with its chugging guitar riffs and dabs of electronic distortion. Yet it also has a delightful old-school vibe through its 80s-styled melodies and elaborate keyboard work. It's clear that composer Masahiko Hataya made the most of the Neo Geo's sound board while producing this one. Hon Fu is also accompanied by a solid rock anthem featuring a catchy pentatonic melody. Unsurprisingly, it's gone on to become something of a fan favourite.

That said, there is still plenty of diversity in this release. "Taku Hatsu" and "Taste of Crocodile" both blend traditional instruments with contemporary elements to very different effects — the former melodic and warm, the latter rhythmic and eccentric. They fit the respective characters, with Joe Higashi being portrayed more goofy with each Fatal Fury game. Another welcome returnee, Mai Shiranui's theme sounds exotic and alluring with its blend of koto, piano, and harp. It's a surprising addition for a fighting game, but creates the desired surreal effect in context. Its interpretation on the game's arranged album is even more elaborate. Another obvious highlight is "Taste of Honey", which blends hyper-catchy funk riffs with exotic instruments and tribal chants. What a great fit for jungle boy Bob Wilson!

Several tracks on the album explore a grittier sound. Blue Mary's "Kiss Me" is an excellent example; blending jazzy piano lines with moody synth accompaniment, it is the perfect portrayal of the secret agent. Less impressive is Andy Bogard's "Thunder Surge", which was inspired in concept but sloppy in execution. It suits his American background and the urbanised gameplay well, but isn't as catchy or endearing as his original portrayal. It's also one of the few tracks that seems limited by its synth. Boss character Geese Howard's two tracks are back in more familiar territory with their rock emphasis, but once again raise the bar for the series both compositionally and technologically. "Kissed By Geese", a direct arrangement of his Fatal Fury theme, sounds especially good in this rendition. Inspired by Fatal Fury 2, the final boss Jin Chonrei takes an orchestral approach; but rather than destroy Mozart, SNK's Macky this time offered two original compositions that set the scene beautifully.

The main exclusives featured on the Real Bout soundtrack are the character themes for the three new cast additions. One of the strangest additions to the series to date, Duck King's theme features an assortment of voice samples above some funky licks; while not bad for their day, the samples sound ridiculous by today's standards. Kim's "Seoul Town" and Billy's "N.D.R." stay closer to the series' rock focus, the former having a soft fusion sound, the latter suitably hard-edged. For this release, SNK also created a handful of new jingles for the menus and event screens, none of which are particularly worth one's time. The ending theme "Devotion -The Sunset Sky Final-" is a brief jazz fusion affair that doesn't quite compare to its predecessor. The release closes with a series of voice collections and sound effects collections.

The Real Bout Fatal Fury and Fatal Fury 3 soundtracks rank high in the series, given they have such a firm sense of character and individuality. Nearly all the featured character themes are both creative and memorable, in contrast to their hit-and-miss predecessors. While not much is added to the Real Bout Fatal Fury album, the new additions do help to flesh out the experience. A notable omission is the ending theme, though the character themes for Kim and Billy help to make up for it. This is a great release, though those that have a wider interest in the series' music should check out its box set instead.

<VOICE & S.E. COLLECTION>
31~49
Album was composed by Shinsekai Gakkyoku Zatsugidan and was released on February 07, 1996. Soundtrack consists of 49 tracks tracks with duration over more than hour. Album was released by Pony Canyon.